“The new way of PR, as in marketing, is personalization.”

Edward M Yang is a Managing Partner at Firecracker PR. Firecracker is a public relations and marketing firm specializing in high tech companies. You can follow Edward on his blog . 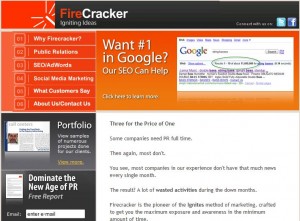 MO: What inspired you to start Firecracker PR and how has your background and experience contributed to its development?

Edward: My goal was always to transition from the consumer packaged goods industry to the technology industry. The rapid pace of change was something that was appealing to me. So immediately after my MBA at UC Irvine with their technology marketing focus, I went to work at Gateway Computers. Subsequently I had stints at an enterprise software company and another hardware company. What I found was that most tech companies are by necessity great at technical details but usually need help in communicating benefits to their prospects.

What I also found was that most traditional PR agencies charged quite a bit for what seemed like not much results. There was a real need for public relations that fit the budget of a typical tech company while helping them gain awareness in the mind of their target market.

Our initial strategy was to run our agency completely virtually. At that time, in 2004, such a decision would be considered controversial. Today, not so much. For about three years I built a client base working evenings and weekends. In 2007, I made the leap into Firecracker full time…right into the worst recession of a generation.

Thankfully, through the grace of God and our ability to keep overhead costs low, we weathered the storm and in fact doubled revenues for the first two years of the recession.

Being both an enthusiast of technology as well as having worked on the client side for tech companies has really helped me quickly assess the need of a prospect that approaches us. And being born so to speak during the recession has trained us to run lean and mean, allowing us to pass our savings on to our clients in the form of lower hourly fees.

MO: Can you tell our readers about you pioneered the Ignites method of marketing? Do you consider yourself an innovator?

Edward: The Ignites method of marketing is something that naturally sprung from our three core service offerings of public relations, search engine marketing and social media. In reality, all three have the same goal: generating awareness.

What we also found was that many companies, especially service-based ones, may not need full blown PR for 12 months a year. Even with the most creative PR, you risk overexposing yourself to the media without real news.

Ignites sets up a rotation of PR, SEM (search engine marketing) and social media. It is customized to each client, but basically focuses on PR for the first couple of months, then shifting primary efforts to SEM, then social media. In this way, our clients can experience the benefits of all three activities at the same total monthly rate that a traditional PR agency would bill for only PR.

Besides the obvious cost advantages, it also does away with having to deal with two or three separate agencies for each functional area.

I do think we try to find ways to do things differently from our competitors. One book that has had an impact on how we innovate is “Differentiate or Die” by Jack Trout. Great advice for any company on how to stand out from your competitors. Another person that’s had a dramatic impact on us is Dan Kennedy, whose marketing courses helped us to rethink our entire way of doing business.

MO: Why is the old way of doing PR dead?

This leads to two results, both of them bad. First, a company might spend time and money on a press release, put it on the wire and wonder why they aren’t getting any news coverage. Second, it inundates reporters with too many press releases.

The new way of PR, as in marketing, is personalization. PR is similar to sales. You must build a long term relationship with the media. You must understand their needs, and give them what they want. You cannot force your story onto them. Nothing will get you labeled “spam” faster.

The new way means building relationships with the media using emerging channels such as blogs, social media to connect and interact regularly with reporters and finding ways to leverage PR in other areas such as SEM and social media.

MO: Have you ever had to turn a potential client down?

Edward: We actually turn down potential clients quite a bit.

The most common reason is if they are actually looking for a publicist to promote a book, an album or other artistic endeavors. In that case, we describe the difference between a PR firm and a publicist and encourage them to search for a publicist in their particular field.

The second reason is if they have an unrealistic expectation of what they want to achieve for their budget. Many companies don’t realize the manpower needed to plan and execute a really compelling PR strategy. Again, it goes back to their preconceptions that writing a press release is all that’s involved. But once we discuss things like creative campaigns, bylined articles, award submissions, speaking engagements and other PR initiatives, they quickly learn that PR is much more than that.

The final reason is if the company is engaged in some area that we disagree with from a moral standpoint. It’s a free market, so they have the freedom to find a vendor who is more aligned with their philosophy but we also have the freedom to politely decline.

MO: How is PR cheaper than advertising?

Edward: Not only can PR be cheaper, it can actually be more effective as well.

A full page four color print ad in a magazine can run you around $10,000. For that amount you can have about two months of our Ignites strategy, more or less. A print ad will be seen and forgotten pretty quickly, even with the strongest call to action. An easy way to validate this is to ask someone to describe the last magazine or newspaper ad they remember. Most likely, they can’t. Television and radio has higher retention, but also is usually out of reach or not the right vehicle for some companies, especially if they are business-to-business.

Banner ads are cheaper but are also notorious for very low clickthrough rates.

So with the same $10,000 for the hypothetical print ad let’s say we create a two month campaign that focuses on PR and SEO. Let’s then say it leads to two or three very prominent stories, pickup on websites from the press releases and a top five ranking on Google for an important keyword. Which would you rather have, all things being equal?

Another great book on this subject is “The Fall of Advertising and the Rise of PR” by Al Ries and Laura Ries. Their main thesis is that PR is superior for building brands, advertising for maintaining established brands.

MO: What inspires you in both work and life in general?

Edward: I’m a rare specimen, a conservative who is also a born-again Christian living in the state of California. As such, my inspiration comes from Jesus Christ. It may not be politically correct, but at the end of the day I want to believe that I’m aligning myself with the will of God. If I do that, everything else will fall into place.