“Discovery comes when you look in places not easily seen, entrepreneurs understand that.”

A J Borowsky has invested in real estate, made soap, explored financial planning, produced and edited documentaries, and written books, all while holding a “traditional” job in television news.

AJ is available to inspire your organization or group to think differently, take a long term proactive approach, and ask What Next. Weaving stories from his life with examples that have inspired and motivated him, AJ leads the audience on a hike through life with difficult climbs and steep descents. Extolling the virtues in his book, What Next A Proactive Approach to Success, AJ emphasizes curiosity, adventure, and the willingness to travel multiple paths through life.

You can follow AJ and his proactive approach to life here – http://www.askwhatnext.com 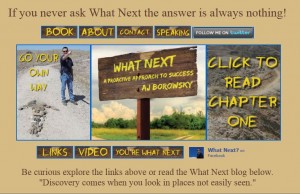 MO: Where does your clear entrepreneurial streak come from? What was the first business you ever started?

AJ: I don’t want to say that my entrepreneurial zeal is innate because that would indicate that a person is either born with it or they’re not, and I don’t believe that. I do believe some people have a greater concentration of the traits shared by entrepreneurs, if that’s enough of a distinction.

I have always been curious about things, been comfortable talking to all kinds of people about various topics, I’m passionate about my beliefs, and I love business. It’s never enough for me to come up with an idea, what’s the point if you don’t share it, market it?

As a child I suppose I could have gone in a different direction because my first “business” venture was organizing my friends into a band and performing in my back yard. We would also put on skits, plays we had “written.” I’m glad I changed direction because I would have been the only starving artist to literally starve.

The first business I created that had any kind of income was a video production service. I began it while I was in college. I was a social entrepreneur before that was popular, producing videos for environmental groups. Of course they didn’t have the means to pay me so I’d sell the tapes to other groups to spread the word. I even packaged them together into a service where individuals could order the tape and have it sent to their congressman with a letter on the topic. None of that paid very well so I supplemented it with actual paying jobs like video taping seminars for corporations.

My biggest success came when I travelled to Ohio to document the protest of a toxic waste incinerator built next to a school. Martin Sheen was the featured speaker and he led the march to the incinerator. I almost lost the wireless microphone I had temporarily “procured” from my college when Sheen was arrested.

That first business sparked several others including a catalog service selling videos and a web design company called Dig-It-All Productions.

MO: What do you think are the three core characteristics of entrepreneurs?

AJ: Funny that you mention three because I believe that by cultivating just three traits anyone can be an entrepreneur, or simply more successful in anything they do.

The first trait is curiosity. Entrepreneurs listen better than they talk, they explore many more options, they “think outside the box” (even though I hate that phrase), and they immerse themselves in learning new things. Curiosity means you explore all possibilities because the next great idea isn’t going to announce itself. Discovery comes when you look in places not easily seen, entrepreneurs understand that.

The second trait is a sense of adventure. Entrepreneurs aren’t afraid of risk but they aren’t risky, there’s a big difference. I will go out on a limb but I’ll test the limb first, I’ll continue testing it the farther out I go, but I’m exhilarated by the journey. An extreme example of this trait is Richard Branson with his many world record attempts. Ted Turner was a competitive yacht racer who won the America’s Cup, that’s adventure.

The third trait is closely related to the second, and that is the willingness to step off the path you’re on, or simultaneously walk another path. Curiosity, and a sense of adventure aren’t worth much if you don’t take action. Decisiveness is the third trait.

MO: What inspired you to write your latest book, What Next A Proactive Approach to Success? What did your creative process look like while you were writing? Do you hope to publish another?

AJ: It was the end of the summer season and my wife, Julie, and I were taking one last cruise on our boat before storing it for the winter. I used this opportunity to pitch my latest idea. She refers to my ideas as schemes, so I knew it would be a hard sell.

A restaurant that I worked at during my college years, overlooking the bay we were now leaving behind as we headed for the channel, was for sale and I wanted to buy it. The case I laid out was compelling and she was warming to the idea. There was one thing still bothering her, however, and she asked me, “Why are you never happy? Why do you have to have a what next? Can’t you just be happy with the way things are?”

Thinking about that for a moment, I responded that if more people asked what next, if they had a backup plan, maybe they wouldn’t be in so much trouble when bad times hit. We had the flexibility to explore this idea because we prepared for the future, kept moving forward, and had the resources to take advantage of the opportunity.

I wrote the book to encourage people to think about the future and to take steps to position themselves for success. I realized that the people I look up to share the common traits I mentioned above, curiosity, a sense of adventure, and the willingness to take action. Success can’t be learned but those traits can and that will lead to success.

A friend of mine said that I’m the only person he knows who can turn arguments with his wife into a book. Julie doesn’t like books like this, business, self-help, motivational books. She was my sounding board, however, the person I trusted with the secret that I was writing the book. I’d write a chapter, let her read it, tear it apart actually, and I’d rewrite it. If she was no longer able to refute my logic, then I knew I’d made a strong case.

Some of the topics in the book were formed as we debated other concepts. Julie kept asking me why people need a what next and I said that too many people think they can coast through life. I think that conversation led to the best chapter in the book: Coasting. The main takeaway is that you can’t coast uphill and no matter how long you’ve been able to coast another hill is inevitable.

There is definitely another book on its way. It’s a long way off but it’s beginning to take shape.

MO: Who inspires you?

AJ: I’m impressed by wild success like that of Warren Buffett or Richard Branson but I’m inspired by much more ordinary success. If a person is going to read a book because they think they can be a billionaire, they’re wasting their money. If that’s their goal, they’ve already failed.

My parents inspire me. My father worked two jobs for 30 years and when he retired from the fire department, he continued with his other job for another 20+ years. My parents taught me the value of hard work.

Chris Gardner whose book The Pursuit of Happyness chronicles his amazing story of triumph from homelessness to wealth inspires me but not for the reason you may think. The gap he overcame is impressive but the determination, drive, and passion he had is what inspires me. There are others who pull themselves from those depths without reaching as high as Gardner and they are no less inspirational.

I refer to ordinary people who are successful as “silent successes.” I count myself among their ranks. Silent successes are the ordinary people you and I pass on the street without knowing how well they have done. To borrow a phrase, they are the millionaire next door. This is the realistic goal we should strive for. If, by asking what next, we reach extraordinary heights, that’s great but it isn’t necessarily the goal we begin with.

MO: A lot of people have great ideas but don’t have the motivation or confidence to follow them through. What would your advice to those individuals be?

AJ: Fear is a factor that saps your motivation and undermines your confidence but passion is stronger than fear. Unfortunately you can’t simply flip a switch and turn fear off. I’m afraid of heights and yet, as a hiker, the hikes I do often require me to climb steep cliff faces and rock walls. I build up to it, however, by climbing shorter, less sheer inclines first.

When it comes to a business idea, for example, too many people think of it as an all or nothing proposition. There’s no reason to quit your job, that’s scary, and foolish. Begin the process, take the risk but make it less risky by continuing to work. If your passion is strong enough you’ll be able to put in the additional hours. If you aren’t willing to sacrifice then you aren’t as committed as you think you are and maybe the idea and plan need to be reworked.

Inspiration without action is just a good intention and while laudable, good intentions don’t take you anywhere on their own. Inspiration is like a flint without fuel, the spark is there but nothing catches fire. You need to provide the motivation, the tinder for the spark. If that means sharing your ideas with lots of people then do it, have them hold you accountable. Be careful, however, because if sharing your ideas leads to negativity, that will kill your motivation.

AJ: Because other people don’t often share my enthusiasm and drive for my ideas (at least not in the beginning), I’m often forced to build momentum alone. Success can’t be achieved without help and support. The one thing I wish I was better at is connecting with like-minded people. A skill I would like to improve is networking.

I believe all entrepreneurs have to be careful and manage their drive. Entrepreneurs are constantly developing ideas, many never make it out of their head but the ideas flow continuously. While necessary for success, that steady stream of ideas can also get them in trouble if they try to do too much. I need someone to temper my enthusiasm because I think every new idea will be a wild success. I’m fortunate that I’ve found a person who can do that.