“We think that by creating a sense of “family,” for our staff, especially in a restaurant housed in an old, converted bungalow, our guests receive something more than just a good meal and become part of the Grub family as well.”

Chef Betty Fraser, along with co-owner Chef Denise DeCarlo, heads the Hollywood-based, award-winning restaurant Grub and the successful As You Like It Catering. By integrating a unique sense of style and never-ending energy into her work, Chef Betty, is known throughout the Southland for her signature “California Comfort Food, served in an environment that can best be described as “home.”

Betty was seen in the second season of the Bravo Network hit “Top Chef” as well as cooking her “Ba-Da-Bing Betty’s Grilled Cheese Sandwich” with Al Roker on “The Today Show.” She co-hosted alongside noted chef Susan Feniger on the successful Bravo / Lexus produced “webisode” series titled Perfectly Delish and has been seen on numerous television shows including the syndicated “The World’s Greatest Chefs,” the Food Channel’s “Weighing In,” the Cooking Channel’s “United Tastes of America” and ABC’s Trendspotting. She’s also a frequent guest chef at food and wine events throughout the nation. 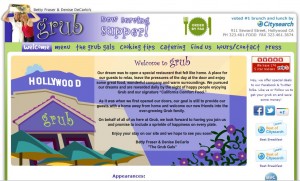 MO: Where does your passion for cooking come from? What were your early influences and inspirations?

Betty: My earliest memories of being in the kitchen were with my Mom. I became fascinated with her Betty Crocker Cookbook, no doubt because it was great for a young girl with the name “Betty” to know she wasn’t the only one!

But I didn’t really become passionate about food until about 20 years ago when I threw a large dinner party for some friends. I was pursuing a career as an actor at the time and, while I’d always cooked, for some reason preparing this specific meal really clued me in to the amount of creativity involved. It was like putting on a show. I guess it went OK because a guest that night asked if I’d be interested in catering a small event at her home. And though I would still be considered a novice I jumped at the chance. The phrase ‘word of mouth marketing’ is never truer than in the food industry and before I knew it I was getting more and more requests.

I realized immediately that cooking had many of the same elements that I loved about performing…the preparation, props, decorating a set and then the final performance for an audience. I threw myself in to it and the next thing I knew I was opening a catering company and from then found myself owning a restaurant. Saying ‘yes’ to that first request was one of the best decisions I’ve ever made.

MO: Can you tell our readers about the hurdles and benefits of being a women owned business?

Betty: While I’d like to think we’ve gotten past a lot of the bias I will still, on occasion, run in to a male vendor who doesn’t seem to understand that running a business isn’t dependent on someone’s gender. It’s like my “No, thank you” doesn’t seem to register and I’m not really sure of what I need. Believe me, I know my business. But for the most part this type of behavior is relatively rare.

I think one of the benefits from owning a restaurant with a female partner is that we may have a little different managerial style than the stereotyped aggressive male restaurateur. We like to have fun and maybe have a softer, gentler way of dealing with both our employees and guests. And because some of our menu names are a little out there, like the “Big Ass Ice Cream Sandwich,” we may be able to get away with some things that wouldn’t work as well for a male restaurateur.

MO: How challenging is it to convey your very clear vision to your staff?

Betty: Our restaurant is a direct correlation to my business partner, Chef Denise DeCarlo, and my personalities. It’s fun, loud, hectic and a place where pretension is left at the door. So when we’re hiring it’s pretty obvious to anyone applying what we’re all about. We don’t have the kind of employee manual that most corporate chains have and instead encourage our staff to let their personalities come out. That’s not to say that we hire irresponsible people. Every member of our staff is a total pro and takes personal pride in what we’re doing. But we think that by creating a sense of “family,” for our staff, especially in a restaurant housed in an old, converted bungalow, our guests receive something more than just a good meal and become part of the Grub family as well.

MO: What was it like to be on “Top Chef” how has it impacted your business?

Betty: I dove in to the reality TV pool thinking that it would just be a fun thing to experience. But not only wasn’t I prepared for the craziness that exists around taping a show like Top Chef but for the aftermath. The first time someone recognized me on the street it blew my mind. I guess I wasn’t really aware of the reach of being on a show like that had. But it’s opened so many doors for me that I will always be grateful for the opportunity. I started to get asked to appear at some food and wine events as a celebrity chef and it’s just continued to snowball. And as one who not only is passionate about food but also loves teaching and performing, it’s been an amazing experience to combine the three.

I wasn’t really sure if being on Top Chef would have a lot of impact on business. Here in Hollywood most people are pretty jaded by the entertainment industry. But we definitely saw a big bump in the months following the show and still today we’ll have out of town guests that stop by who want to eat at one of the Top Chef’s restaurants. So it was a great experience all the way around.

MO: You’ve been fortunate to win many “Best Of” awards as voted on by both critics and restaurant customers. How do you manage to outshine the competition and consistently deliver remarkable food and service? Any tips for readers in the restaurant business?

Betty: We never set out to win awards but it’s been a great affirmation of our efforts. Anytime you’re acknowledged for your work feels good and it definitely helps us with our marketing. I think awards are instantly legitimizing to a lot of people and in such a crowded field as the L.A. restaurant scene it’s been a definite help. The best part is that we’ve been singled out without having to change our focus which is on our guests feeling comfortable and relaxed while enjoying some soul-pleasing food. If we cooked for the critics we wouldn’t be staying true to our own goals.

MO: You and your partner have some exciting developments on the horizon. Could share some of the details why 2012 could be your best year yet?

Betty: The big goal for 2012 is bringing a cookbook we’ve been working on to completion. We’ve been compiling our recipes over the past few years and are looking to publish a book that is more for the novice than the experienced cook. I feel very strongly that cooking can be enjoyed by most everyone but with all the shows out there displaying the work of trained chefs many people are intimidated to get in there and experiment. At my restaurant Grub, our focus is taking old-time classics and infusing them with a contemporary twist. So our cookbook will encourage taking an easy to prepare dish and then experimenting with different ingredients to create something new. Any chef will tell you that trial and error is what ultimately delivers the best product. We want people to feel safe, creative and enjoy being in the kitchen. And the best way to do that is to start with a basic Mac and Cheese as opposed to potentially ruining a $30 steak.

My business partner Denise and I also have two television show concepts we’ve been working on that are getting a lot of interest. My background in the entertainment industry has taught me that you don’t get excited until you go in to production but we’re excited by the process. And like everything we’ve done to this point the shows are a direct reflection on our personalities. So if one of them hits…expect some big energy and some big fun!