“As a team, we have a realistic list of what we want to do with the website, which continues to keep us focused on our goals.”

Slickdeals CEO, Bryant Quan, joined the company as its second employee during his freshman year in college. He stayed in school through his MBA while working part-time with owner Van and became the company CEO at age 22. Bryant has since increased Slickdeals’ profits by more than 400% and is continuing to grow the company with a 91% profit margin.

Founded in 1999, Slickdeals.net is a free, user-driven deal sharing site where consumers collaborate and share information in order to make the best shopping decisions. Slickdeals hosts 18 forums where users interact to share accurate and the most up-to-date information on online shopping deals. Slickdeals is currently the largest deal community and deal website on the web, regularly ranking in the top 125 US websites (as rated by Alexa). 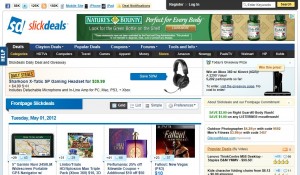 MO: How did you initially get involved with Slickdeals during your freshman year of college?

Bryant: I was an avid Slickdeals user during the site’s initial years. I checked the site everyday, catching deals that were just perfect for my young adult budget at the time. Being a web designer though, I knew that the site had an inherent problem – there were great bargains, but the design was very rudimentary and didn’t look as ‘slick’ as the deals it offered. On a whim, I emailed Van Trac, Slickdeals owner, and offered my web design services for free. I figured that it’d be a win-win situation — I’d grow my web design portfolio and help improve a site that I frequented. Little did I know that I’d be the CEO just a handful of years later!

MO: What were some early lessons you picked up at Slickdeals that you weren’t being taught at school?

Bryant: I was in school for both Management Information Systems and my MBA and there were still a number of things that I had to learn the hard way after joining Slickdeals. In school, we were taught traditional ways of managing employees and finances, but the situations are completely different for startups. As CEO, I take care of a lot of these responsibilities in addition to developing the business, designing the website and keeping our million+ community members happy. There are a few now-intuitive lessons too: face to face meetings deliver far better results than communicating by phone or email, you can only get things if you ask for them and that a fully stocked fridge can move mountains in an office!

MO: How does Slickdeals work? How are you different than your competitors?

Bryant: Slickdeals is a community-based deal sharing site where our 1 million+ users post deals that they find all over the country. Our users share over 500 deals a day on our forums and we have a team of deal editors who select the best deals to go up on our front page. Unlike Groupon and LivingSocial, we do not solicit deals from merchants, but instead aggregate deals that are already out there. We don’t sell anything; we just show our users where to get the lowest prices. There are a few other deal sharing websites in the same space, but we specifically pride ourselves in never taking paid advertisements and posting them as front page deals.

MO: Have you always had an entrepreneurial spirit?

Bryant: Yes — while in school, I ran a couple of my own websites and I also worked as a freelance web designer. In college, I started and ran my own disaster recovery solutions and technology consulting company.

MO: Slickdeals has experienced immense growth since you first launched back in 1999. How have you managed to scale the business accordingly?

Bryant: It’s all about building a great team. We have a lean team of less than 20 full time employees, which forces us to be extremely efficient in everything that we do, be that coding or automating processes. We source our employees from our current Slickdeals community, which means they’re already familiar with our business and they’re enthusiastic about pursuing their own projects. As a team, we have a realistic list of what we want to do with the website, which continues to keep us focused on our goals.

MO: What’s the most exciting thing on the horizon for Slickdeals in 2012?

Bryant: Our user base is growing, and so are we, so we’re excited to be moving to an office more than four times the size of our current one! With that comes a bigger staff and we’re excited to have new members join our team in the next few months. For the site itself, we recently launched a personalization option on our website where our users can customize the deals that appear on their front page. In the next few months, we’re looking forward to the launch of the official Slickdeals app for iPhone and Android!