“A Race is not won when you cross the finish line, it’s won through preparation.”

Derrick M. Guest is the co-founder and CEO of Griot’s Roll Film Production & Services Inc. a video marketing company that provides video services for businesses, non-profits, corporations, city and state agencies looking to demonstrate a product, educate their target market on their services or organization looking to improve their presences on-line using video.

The son of the late Mr. Benjamin Guest & Mrs. Cynthia Guest was raised in the South Bronx. Derrick graduated from City-As-School an alternative High School where he earned his academic high school diploma. Mr. Guest earned his Associates degree from Queens Borough College, where he majored in Performing Arts and minored in Business Management and Marketing. He received his Bachelors Degree from Brooklyn College in Film Production.

Mr. Guest has experience as a playwright having written the Off-Broadway Play “Choices” for the Negro Ensemble Company. He has extensive experience in writing and directing short films such as “30 Minutes of Pleasure”, “The Grade” and “Loneliness” as well as directing television pilots. He won the 2011 British Airways Face of Opportunity and a two day trip to London for the Business Conference. He also is the 2011 Charles B. Benenson Project Enterprise Entrepreneur of the Year. He lives with his wife and partner Eula M. Young and their daughter Shassee. 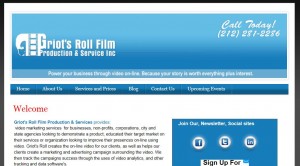 MO: What inspired you to start your own company? Where did the name come from?

Derrick: I knew early on in life that I wanted to start my own business. My mother worked as a home care provider mother for over thirty years in our home before she retired and I watched how she ran her home business.

Griot is a word from Western Africa it means (Storyteller). I like to help our clients tell their story their way, I felt that being a Griot, film maker is telling a story and in business you have to evoke feelings that will make your story translate into what you are doing as a business owner.

Derrick: I would have done more research in the beginning to see realistically who would be our target market. When I started the business I was reaching the wrong target market and we weren’t generating any revenue. What I learn from that mistake is to do your home work test out the market in which you think your market is and see if it is the right target for your business.

MO: What’s your favorite part of the video production process?

Derrick: Creating, I love creating a project from start to finish. I love seeing a story unfold through the lens of a camera.

MO: What sparked your interest in the video production industry? Who or what were your early influences or inspirations?

Derrick: My parents were separated when I was young, so my father used to pick me up on Saturdays and we would go to the movies and then McDonalds, that was a regular Saturday morning routine. I love going to the movies and seeing all those big adventures played out on the big screen, this is where I got my love for filming. Later, I went to City-As-School and alternative high school in New York they had a production studio where they taught television production. The school had one week of internships the next week was academic classes so I worked at some of the biggest television and production companies in NYC.

MO: Can you provide some guidelines for our readers who are contemplating adding video to their marketing strategy?

Derrick: Have a message to what you want your video to say. Have a call to action on your video i.e. a telephone number, website, social media pages etc. so the consumer can immediately go to your website and or contact you. Have incentive in the video on what discount they may get if they mention the video or a promo code. Make the video short; you only have a short window of time to keep a person interested in what you have to say. Make those seconds count.

MO: Are there any trends within the video production industry that you’re excited by?

Derrick: The interactive video. Soon people will be able to click on the video and it will take you right to the person website. Video marketing and technology is so easy for people to upload and to use on social media very exciting to see so many industries now using video.