“We don’t have an national economic crisis as much as a crisis in creativity.”

Dr. Simeon Hein originally came out of academics with a Ph. D. in sociology with an emphasis on statistics and research methods. In order to have more contact with the public, he started his own research and teaching company, the Mount Baldy Institute in 1996. Dr. Hein wants to give people the opportunity to learn remote viewing a type of intuitive training that taps into our subconscious intelligence. Dr. Hein is also the author of, ‘Opening Minds: A Journey of Extraordinary Encounters, Crop Circles, And Resonance’ and ‘Planetary Intelligence: 101 Easy Step to Energy, Well-Being and Natural Insight.’

The Mount Baldy Institute offers people the ability to tap into their hidden potential and innate intelligence through online courses and live group coaching classes. 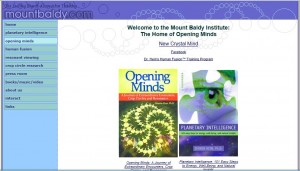 MO: You originally pursued a degree with an emphasis on statistics and research. How did you make the jump to founding a company that helps people tap into their subconscious?

Dr. Hein: Well, it’s kind of a weird story but basically I heard a statistics/political science teacher, Dr. Courtney Brown, talking about remote viewing on my local community radio station in Boulder, KGNU, in 1996 and I was extremely sceptical that ordinary people could do this. So, I thought, the only way to find if it was real or not was to take his week-long course in Atlanta, GA. I didn’t think it would work, which would be a story in itself. But I was wrong: it did work, at least enough to show me that regular folks all have some degree of psychic, intuitive ability. It also showed me that gut feelings and hunches had a scientific basis to them.

After studying and teaching remote viewing for over a decade now I’ve realized that the best application is to show people that they possess this ability and that it can give them a tactical advantage if it used properly and with sufficient training. Mainly, that you can learn to trust your gut feelings and hunches much more than you think you can. They are just as accurate a source of information as logical, rationality-based thinking. A study is just now emerging from researchers at Columbia Business School and the University of Pittsburgh School of Business in March, 2012 that supports this idea: that people who pay attention to their feelings make better and much more accurate predictions about the future than those who don’t. It’s not a small difference either, it’s a big one.

Recent books like Malcolm Gladwell’s Blink: The Power of Thinking Without Thinking, another titled Hare Brain, Tortoise Mind: How Intelligence Increases When You Think Less by Guy Claxton and one called Executive ESP from the 1970’s also back up this idea: that, with proper training, the subconscious mind can often make decisions better than our conscious one.

MO: What kind of tools do you use to encourage people to think more holistically? What kind of benefits can whole brain thinking provide?

Dr. Hein: One of the main tools I encourage people to use is their own is their own imagination in a structured way. It takes some training but the imagination is our conduit to our subconscious mind and can create really huge breakthroughs for us if we let it. Inventors and scientists like Da Vinci, Edison, Tesla, Einstein and many others knew the secret of this. Take a look at How to Think Like Leonardo Da Vinci by Michael Gelb. Another excellent resource is The Power of Full Engagement by Tony Schwartz.

I’m convinced that if the United States is going to survive economic competition from China and India, we’re going to have to learn this type of thinking and use it on a regular basis in a big way. Whole brain thinking isn’t an option anymore, we need it to create breakthrough products and services. It’s a national resource that hasn’t been tapped yet. We don’t have a national economic crisis as much as a crisis in creativity.

MO: You say that you want to help people ‘maximize their resonance’, what is resonance and why should we be maximizing it?

Dr. Hein: Well, the full slogan is “Maximize your ability to perceive and work with resonance, frequency, vibration, and energy” but that’s a mouthful. We live in a society that has largely valued things and stuff more than processes, relationships, and information. But that’s a Newtonian view of the world. Modern physics tells us that everything is made of living energy: stuff is almost entirely empty space filled with energy blips, here and there. There really isn’t anything there but very fast vibrations.

We’ve been trained to value acquiring stuff over focusing on the quality of our thoughts and feelings. But if you look at the most successful economic sectors right now, we’re talking about movies, music, and games: all resonance-based industries. Traditional left-brained work can now be automated and outsourced. But not creativity-based work, at least not as easily. Daniel Pink wrote a book about it called Revenge of the Right Brain. Basically the idea is that holistic and creative-thinking skills are not so easy to duplicate or mechanize.

So when I encourage people to “maximize their resonance” it means learning to tap into their deeper creativity which really makes each of us unique and makes each of us valuable in a different way. Another way to say it would be, in a very general sense, “identify and maximize your special talent.”

MO: What were the greatest challenges you faced when researching and publishing your book?

Dr. Hein: The main challenge was how to publish it. In the end, I chose to self-publish which is very challenging, I mean you need to learn type-setting, graphic design, and fonts and so forth, but also very rewarding. And in the end, you still own your product which feels great. It’s a lot of work but also very gratifying to see people purchase and enjoy something that is created and produced by you. It has been changed or edited by anyone you didn’t hire yourself.

MO: Would you say that the general public is becoming increasingly interested in paranormal phenomena? If so, what would you say is contributing to this trend?

Dr. Hein: This is something I’ve been following recently. People just feel at some gut level that there is more to the picture than left-brain, linear thinking and they want to know more about it. It’s just plain old curiousity that doesn’t to be told to shut up anymore. We all crave the truth about our universe at some visceral level and that expresses itself in lots of ways including zombie movies, vampires, and fantasy. It’s the subconscious mind’s unique way of saying “hi there, I’m here, let’s explore”. It doesn’t have to be fear-based but we like to be scared to some degree so that genre still sells. If we could harness that emotion and channel it into something educational we would collectively learn a lot more than just being creeped out or terrified while watching scary movies and films

MO: You founded the Mount Baldy Institute in 1996 and have since published a book, have a blog and a You Tube channel. How has the landscape of social media influenced your ability to educate individuals on your unique subject matter?

Dr. Hein: It’s just growing by leaps and bounds everyday. Amazing really. These days, anyone can have their media platform and go directly to the public with their stuff. If you love your subject matter, it’s great. But it also means you’re more accessible to everyone so you need to make sure you’re always operating at your highest level of quality and sincerity otherwise it will come back to bite you.

There’s never been a better time that I’m aware of to have your own platform and share it with your fans. You just need to make sure that you love your topic or it will seem like a ton of work. But if you’re really into your subject, it will feel more like building a lasting monument with a global impact. And that always feels good and worth it in the end.