“The process will change, but the vision should always stay the same.”

Georgette Blau is the President and Founder of On Location Tours, Inc. ”If you film it, they will come.” Armed with just a van and a driver, Georgette introduced the concept of TV and Movie tourism to New York City in 1999 at the age of 24.

On Location Tours, the world’s largest TV and movie tour company, with tours in NYC, and Boston. The tours feature sites from the hottest and latest on the big and small screen. Founded in 1999, it is one of the East Coast’s most popular tourist attractions, serving over 100,000 tourists and locals annually. Some of the tours include: our signature New York TV & Movie Sites, Sex and the City Hotspots, Gossip Girl Sites, Sopranos Sites, Brooklyn TV & Movie Sites, Central Park TV & Movie Sites and Boston TV & Movie Sites. 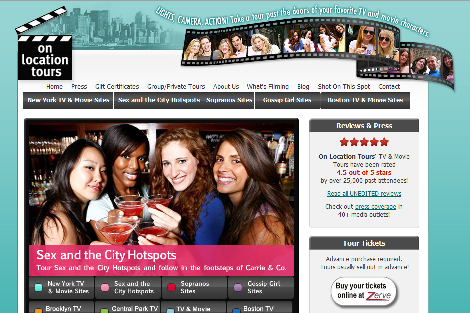 Georgette: My “aha” moment was a magical one; In 1998, similar to George and Weezie from The Jeffersons, I had just moved on up to the Upper East Side of Manhattan. I was walking up East 86th Street one day, and noticed The Jeffersons apartment building. At home, I had a book on TV locations in New York, and realized that there were so many of them. New York is actually the most filmed building in the world, and there wasn’t a tour to show people a lot of those sites!

MO: How does it feel to have been the first person to have introduced the concept of TV and Movie tourism at such a young age? Did you ever feel out of your depth?

Georgette: I remember starting out and although I was very excited about going on location to my favorite TV character’s doorsteps, a lot of people were confused as to what I was starting, and often compared it to literary sites. What always amazes me is that when I first started, we were the first TV/movie tour company in the world (the first on the Continental US), and now there are over 100 companies, so it has certainly become a phenomenon in just a decade. We are the largest TV/movie location tour company in the world. I would say that I felt more out of my depth as far as certain aspects of business when I first started, but I did always feel like an expert on TV and movie tourism, because that’s what I’ve known from the beginning.

MO: Can you talk about the process of putting together On Location Tours and what it entailed?

Georgette: It took me a few years to figure things out, especially because I had recently graduated from college and was new to the world of business. I first had to get my tour guide license, then come up with routes for the tours, and then look at ways of marketing the tours, especially on a very limited budget. Back then, it was a lot of print advertising for purchase and a lot less in the way of online opportunities. I then had to hire tour guides and look at companies I could charter buses from. I wore every hat the first five years of the company, but I’m glad I have that experience that I can now share with my employees. Because I did not have a business background, and because of changes in the world, especially online, I would say that my process of marketing and running the business changed many times, but the original vision of taking people to their favorite TV and movie spots always remained the same.

MO: Has it been fun to connect fans with the locations of their favorite television shows and movies? What’s been some of your favorite feedback?

Georgette: I love seeing people’s faces as they stand in their favorite TV and movie locations. We’ve received over 25,000 reviews through our direct sales over the years, and our average rating is almost five stars, which took a lot of hard work. We are also almost a five star rating on Trip Advisor. In addition to reviews, we’ve had some fun and touching stories over the years, including tours that have passed celebrities from the shows (that have some character/celebrity confusion attached to them), and letters from customers, including one very nice card with photos enclosed from a deaf woman who really appreciated the fact that we gave her a script of the tour to follow.

Georgette: I would say that the most fun part has been making people happy and connecting them to locations in an escapism kind of way. The most challenging has been two fold, one, finding the rules and laws that pertain to our niche, because every business is different and has a different set of needs, especially when it’s a start up, and two, managing our 30+ tour guides. Our tour guides are wonderful, but they are all actors, which sometimes makes for employees who want to do things their own way and not the way in which we’ve planned and need for them to happen.

MO: What’s the most exciting thing on the horizon for On Location Tours?

Georgette: We are in discussions with a few studios to put together co branded tours, which is the direction that I want the company to take. The great potential about working with studios is the idea that we can be their marketing “vehicle,” for fans and non fans alike, and that studios can market the tours through their channels.