Getting Things Going in a New Business

Starting a business of any size requires hard work and a dedication to details. It’s vital to understand and be in compliance with small business laws. Just because your small business is “small” doesn’t mean that the growing stages of your business are any less important. Be prepared for a tough battle, the odds are against you. Dr. Gregory Murphy, dean and director of the MBA program at The College of Business at the University of South Indiana, has been quoted by the Evansville Business Journal that as many as 80% are out of business by the fifth year. SBA economist, Brian Headd, during his report to SCORE, states that a study showed that 48% of small businesses were still operating after four years. SBA further reports that more than 65% of businesses survive two years. The U.S. Census Bureau reported 76% of businesses open past the one year anniversary. 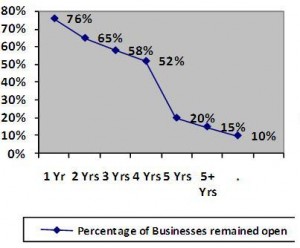 Your small business’s growth from day one is one of the most important management aspects you’ll have to deal with on a day-to-day basis. You should account for it in your business plan, as well as being prepared to act for the ever-changing shift in demand. Entrepreneur.com, as well as a multitude of other online resources, lists several things that you can do and plan for in order to make sure that your small business is successful at any stage of development. Some tips include:

• Hiring people that are experts for a specific job function

• Place high urgency in everything you do

• Never spend a dollar you don’t have to

• Be in compliance with laws

During the roll-out of any business venture a “management team” needs to be pulled together, with serious thought given to the key positions that need to be filled and who should fill them. Operations manager, accountant or bookkeeper, office manager, marketing manager, and head of sales are just some examples of what a “management team” should consist of. Many times in small businesses there are a few people with multiple key roles. This is not the best way to go, but your small business requires the fulfillment of key positions. It is also important to clearly identify the roles and responsibilities of each team member.

Placing close friends and relatives in key positions should be avoided, as this can cause conflict, especially if they are not qualified to fill the role they need to fill. There are two criteria to justify placing someone in a key position: (1) training and skills to do the job, and (2) the track record to prove his/her talents. Perhaps more importantly, key persons should share the company’s vision and mission. Take Apple Computer’s Steve Jobs, for example. As Business Analyst says, “He is the entrepreneur of the era because he has missionaries of his company in key roles. Jobs is successful because he is true to his personal mission and demands the same from his staff.”