“The Internet is THE most golden opportunity in the history of mankind… but you have to watch your back while you’re fishing so you’re not eaten by the sharks yourself.”

In 2008 Jack wrote “Facebook for Real Estate”, a book focused on how the licensee can turn this social network into a networking/prospecting tool. He followed that up with “LinkedIn for Real Estate”. In 2009, the National Association of Realtors® started selling those two titles online and at their trade shows. In 2010 he wrote “Twitter Startup Guide”, “Social Media Overview” and “Advanced Facebook”.

Currently, Jack is focusing on safe behavior online. Most people are unaware of the kinds of information available publicly and with the incorrect information made available in social media, they open themselves up to burglary, identity theft or worse. He is developing a set of courses designed to bring the average internet surfer up to a minimum level of safety. 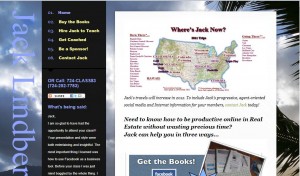 MO: What influenced your decision to focus on developing internet solutions for the Real Estate Industry?

Jack: I’ve always been technology oriented and a research hound, so as soon as the Internet came along for the average joe, I started learning how to use it and benefit from it. AOL was the first site where I learned how easy it could be to communicate with others across the country and the world. I love the efficiency of the Internet and software combined.

MO: What are some basic tips for implementing social media into a marketing strategy? Can you provide some examples of how the approaches may differ between using, Facebook, LinkedIn and Twitter?

Jack: The key is to understand the differences and where social media lies in terms of an internet plan. Initially, social media play a marketing role but can be expanded to enhance customer service and build loyalty. Facebook is like a backyard barbecue; casual in nature and oriented in having fun with your friends. It’s the best place to build relationships and trust online. LinkedIn is more like a business networking mixer. People are on LinkedIn for the purpose of exchanging referrals, business knowledge and to make more business contacts in general. Twitter is for news, but unlike traditional news sources such as TV and Newspapers, Twitter is usually straight from the source’s mouth and up-to-the-second. The best use of Twitter is to follow those from whom you want to get information and conversely, be a news source to others. Want business leads from Twitter? Be a news/information source about the business you’re in.

MO: Can you talk about the “evolving content” that you’re developing for the Real Estate industry to use on demand?

Jack: Most aren’t fully aware of the true potential of the Internet. Because of the interactive nature of it, the Internet allows you to influence your viewers with words, colors, images, etc. Once they land on your home page, you can “steer” them if you know how. No need to “shotgun” on the homepage hoping to make something stick. Know your viewer, anticipate their needs in conjunction with your product… and guide them to where they want to go!

MO: Can you give away one of your secrets of using the Internet to improve visibility, loyalty and lead generation?

Jack: Don’t underestimate the value of Facebook’s ability to sift out targeted audiences based on a topic/interest, etc. Groups, not business pages, are the best way to do this in most cases. Many businesses are afraid to address the personal side of Facebook but it’s the best way to build a loyal, long-term following.

MO: What are some of the most common mistakes you see realtors making when using social media? How could they be avoided?

Jack: Overselling, overselling, overselling. Get rid of their business pages to start and get involved in meaningful neighborhood groups. Avoid posting listings ANYWHERE on Facebook. It’s not the nature of the site. Make friends – when they’re ready, they’ll come to your site to deal with real estate.

MO: What professional accomplishment are you most proud of so far?

Jack: Writing the first and still the most comprehensive, practical books on Facebook, LinkedIn and Twitter that the National Association of Realtors@ sells.