“We are on a mission to help 500 first-time entrepreneurs incorporate for free”.

Jeff Unger is the founder and CEO of eMinutes. He is a graduate of the nation’s top school for entrepreneurship, Babson College, where he was awarded the Economics Letter of Achievement. Since founding his firm in 1997, Jeff has become best known as an expert on business organizations, including corporations, LLCs, and partnerships.

For nearly twenty years, the lawyers at eMinutes have formed corporations for A-list celebrities, musicians, and athletes. Now, eMinutes has embarked on a mission to help 500 first-time entrepreneurs form businesses for free. Free means free. eMinutes is even paying the filing fees. 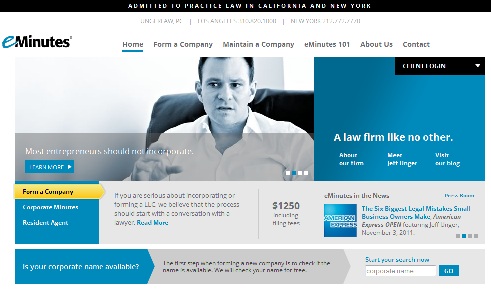 MO: Where did your idea for eMinutes come from?

Jeff: There was no business plan. I worked for an amazing corporate law firm in San Diego before moving to Los Angeles, where I opened a little office. My mom worked for me until she got fed up with me. Little by little, I started earning a reputation as the go-to guy for corporate formation in the entertainment industry. Lightning struck when one entertainment law firm asked me to handle the corporate minutes for about 500 of their clients. Fifteen years later, I’ve invested close to a million dollars in technology and we are handling the corporate minutes for about 10,000 entities.

MO: How does eMinutes work?

Jeff: We work like any other corporate law firm except that we charge flat rates for all services and our practice is limited to entity formation and maintenance. We created a cartoon to explain what we do.

MO: How are you able to offer a low, flat-charge price structure that blows other law firms out of the water?

Jeff: We believe in working very hard to charge our clients less. When Amazon launched the Kindle Fire, Jeff Bezos wrote to his customers, “There are two types of companies: those that work hard to charge customers more, and those that work hard to charge customers less. Both approaches work. We are firmly in the second camp”. eMinutes is also in the second camp. We are firmly committed to a low, flat-charge price structure that blows other law firms out of the water. To do that, we don’t waste money on receptionists, clerks, paper, postage, or trying to impress with anything other than the quality of our work. We also have the scale to invest more in technology than any other law firm could possibly justify.

MO: What inspired you to help first time entrepreneurs, by embarking on a mission to form 500 free corporations? How many have you done so far?

Jeff: I wanted to give back to people who are just starting out. So many people helped me when I was getting started. I grew up in a little town in Ohio where people helped each other, so it just seemed like the right thing to do. But I had no idea how this would impact me on an emotional level. For the first time in 20 years of practicing law, I have received dozens of thank you notes expressing extreme appreciation for what we are doing. It makes me really proud. We have helped about 150 first-time entrepreneurs incorporate for free since launching our mission.

MO: What are some basics that anyone wanting to form a company should know?

MO: Why do you believe that most entrepreneurs shouldn’t incorporate?

Jeff: I think far too many people incorporate. One of the greatest things about living in the USA is that if you want to start a business, you can just do it. Too many people jump online to incorporate when they have an idea for a business, and they regret it later when they learn that they have to file annual corporate tax returns and pay franchise taxes. One of the online incorporation companies boasts that they have formed about 20% of the LLCs in California, but I suspect more than half of those entrepreneurs did not need to form a company in the first place.