“What do you get when you mix a CPA with a sculptor?”

Jeremy Page, CPA is the co-founder of Envision Financials and inventor of Revealed 3D: The NEW Shape of Financial Statements. In 1993, Jeremy discovered that financial statements were easier for many people to comprehend when presented visually. For the past 18 years, Jeremy has pursued his goal to make financial data more understandable and more accessible to more people.

EnvisionFinancials is the developer of Revealed3D: The New Shape of Financial Statements. Revealed is a method of presenting financial statements in 3D that transforms how we think about financial information. 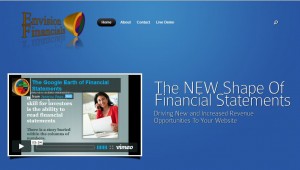 MO: How did you discover that people found financial statements easier to comprehend when presented visually?

Jeremy: I discovered the need for a better way to communicate financial statements when I was serving on the board of directors for an Arts Council. I was their Treasurer and when I brought up the financials their eyes just glazed over. I’m kind of a shy guy and it was hard for me to not take it personally. LOL Though as an aside they did give me a show of my sculpture that was a huge hit. I was in my African/Zen phase and for the opening I asked a couple of my friends to come drum at the opening. They came along with the drummer of the best local band and so we had some high energy drumming going on. It was so high energy that at one point the daughter of a friend came by and said, “Look your sculpture of the dancer is dancing.” And he was! He stood 7 or 8 feet tall and his outstretched hand was jiving to the music. It was one of the best experiences of my life. I think I sold all but one or two of the pieces…but I was in the starving artist category then…never got out really.

MO: How did you come up with Revealed3D: The New Shape of Financial Statements? What did the development process look like? How did you bring this innovative idea to life?

Jeremy: It was during the same period as I was just mentioning. I was back in college, I had bombed out royally the first time, and I was studying accounting. Each semester I’d take one art class as a balance to all the accounting that I was taking. In my final semester I was studying for the CPA exam and I took a Philosophy of Mind class.

The professor was drinking buddies with the art professors and they wanted me to change my major to art. But I had a family then and was not interested. He kept teasing me about being a bean counter. Then one day I was in the library and I saw an ad for Edward Tufte’s book Envisioning Information and something clicked. It was kind of like, “What do you get when you mix a CPA with a sculptor?”

So I started to work on visualizing financial statements in 3D. I worked on it pretty hard. Then one day walking down the hall in front of the accounting professors’ offices it hit me. I was seeing company financials over time. The spark was seeing a drawing of the structure a root tip; seeing the concentric circles and change over time.

The Balance Sheet which is a snapshot in time, and the Income Statement is about change over time. So why not look at financials as an entity that grows. I could see visions of whole histories of companies with spin-offs and division that in my head looked like sequoia cactus or trees with branches.

MO: What were some of the biggest obstacles in creating this new system and how did you ovecome them?

Jeremy: This has been a huge thing for me. I have done a ton of growing, not only on the business side but also in personal growth. For example, we all have new ideas and we might think they are great, but then the next day or so we see why they aren’t so hot. This idea however would come up and I’d think, “Hey, this works.” But then I’d drop it anyway, I was busy with life, and not that great of an opinion of myself.

This was back in 1993 and we were still using DOS. I remember upgrading from a 286 to a 386 computer. And so the computers couldn’t do what my graph required in graphic ability.

Finally, I got the idea patented and proceeded to try to sell the concept to companies that might like it. Hah! What a joke. It took me quite a while before it dawned on me that these companies are inundated with new idea all the time. They work hard to dam the flow. No, I had to carry the idea further.

To bring this idea to fruition required a lot more than what I could bring to it. Bring in people who are excellent at doing what you are not good at. That was one that was a hard one to learn.

I now have had the good fortune to have been able bring into my company a wonderful couple who have themselves have previously sold a company they built to MorningStar. And I have hired some excellent people in marketing, and financial analytics. I couldn’t begin to be where we are if it wasn’t for them. I am so thankful.

MO: Why was it important to you that Revealed 3D was developed for the cloud?

Jeremy: This was an insight that the couple I mentioned earlier came up with, and it was right on target. Our business model is to license the use of these graphs to other programs. Have I made it clear our graph fits in someone else’s program; it is not a standalone graph? We complement the financial information in other programs by bringing in an overview of an aspect of finance that is hard to understand.

Revealed opens the doors of financial to a huge new audience. It is exciting to see the joy I see as people look at Revealed and they know what is going on. They can evaluate for themselves whether this is a growing company or not.

Revealed 3D brings an overview so in a glance a person can get a good understanding of what the financials are depicting. Revealed shows multiple years of financials. I have run out some 20 year graphs. You can see the trajectory the company is on. Comparisons between financials is now possible beyond anything we have seen before. This is powerful stuff.

Back to your question, the cloud is important to us because other sites can access our graphs instantly. Using our widget they can put in a call for the graphs and we can deliver them instantly. We are also able to scale. We are talking to Yahoo and scalability is extremely important to them because with their huge amount of traffic it is easy for them to crash sites that they route to.

MO: How does Revealed3D work and what are some of your favorite features?

Jeremy: The graph is very simple. It is based on the pie chart…with a difference, the diameter of the pie chart is also a variable. So as the balance sheet grows, so does the pie chart. The Income Statement is graphed around the inner Balance Sheet pie chart like a growth ring on a tree. Then the market cap is graphed around the outside. The result is a slice that represents one period of financial statements. The other periods are also graphed. Then they are stacked and the periods are connected together. The result is a 3D form showing the company over time.

I enjoy looking at all of the financials of all the companies on the stock exchange. You can do that on our website. There is so much variation; there is so much to learn. We are only now beginning to understand the insights that we will gain from this new tool.

MO: Do you think of yourself as an innovator?

Jeremy: Yes, I love to pay attention to the patterns that connect. To be engaged in our evolving universe. We are emergent. We have never been here before. There are a ton of problems. Humanity can pull this off. I want to be part of it!

Thank for giving me the opportunity to talk with you.