“This is the core to any startup: the willingness to dig in and work ‘til the wee hours.” 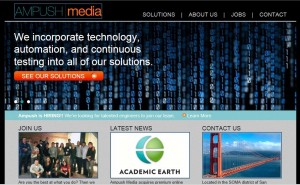 Jesse Pujji is the President & Co-Founder of Ampush. Prior to Ampush, Jesse was an investment professional at Goldman Sachs. In that role, he made $10 to $50m investments in public and private companies in the auto, education and new media industries. Before Goldman, Jesse worked as a consultant at McKinsey & Company in New York and Dubai focusing on the internet media, e-commerce and telecom industries.

MO: You graduated from The University of Pennsylvania’s Wharton School with a dual concentration in Finance and Entrepreneurship. What have you learned from running your own business that you weren’t taught in school?

Jesse: The most challenging part of running one’s own business is not writing software or crunching numbers or even a killer marketing campaign; it’s learning how to manage people effectively. School doesn’t teach a thing about it and it’s rarely discussed in tech and startup blogs. But, it is the most important gauge of success in building a company. Each person is different and has different motivations, quirks, and styles. Maintaining one’s effectiveness in getting goals accomplished while keeping people motivated and excited can be a big challenge. Group work and TA-ing in college were helpful, but much of managing was (and continues to be) learned on the job.

MO: Where does your passion for entrepreneurship come from? Who were your early influences and inspirations?

Jesse: My dad. Since I was born, I’ve never had to hear my dad complain about his boss because he never had one. From age 24, he was an entrepreneur starting 5+ companies and being heavily involved in real estate development and investment. I saw him do everything, from picking out office space to hiring and firing people to developing new ideas that succeeded and failed.

He made my brother and me keep a Quicken ledger of our allowance, and the two of us developed deeply enterprising personalities. We were the first guys out in the snow to shovel driveways. The first year we did it in our own neighborhood. Then we realized that the neighborhood a mile away had smaller, more uniform driveways, yet people would still pay the same $30 to have it shoveled. So we biked there and did 3x the houses in the same amount of time.

My dad started investing heavily during the tech bubble, and this created my two largest career interests to date: the internet, technology & media space and the financial markets.

MO: Can you talk about how you started the company? Did you solicit investors or raise the capital you needed in some other way?

Jesse: My co-founders and I had started a few companies in college, so we were used to the basic blocking and tackling of incorporating, getting credit cards, hiring, etc. We had each spent 3-4 years in relatively high paying Wall Street jobs, which provided us the savings to invest. Most importantly, we received comfort in knowing that even if we failed, we had options. Thus, we relied on savings from previous jobs, as well as a lot of credit cards, to get things started. We decided to bootstrap because we started Ampush in a far more exploratory fashion than most businesses. We had an idea of the space and the opportunity, but we didn’t know enough to feel comfortable taking investor money while learning on their dime.

MO: How has your Wall Street background contributed to the development and success of the company?

Jesse: There are a few key ways this background has helped us tremendously in developing the business:

1. Attracting Talent. We have been able to recruit top talent from the finance and consulting world. A lot of startups have a negative orientation towards ex-bankers and ex-consultants. Given our backgrounds, we think that’s wrong. Those firms have some of the smartest, hardest working people on the planet. Admittedly, we make some adjustments here and there, but if they are made, those people are all stars. Former bankers and former consultants perform particularly strongly in the online advertising space given its quantitative and client-oriented nature.

2. Keeping the bar high. Coming from a Wall Street background, we are used to working with very smart and very hard-working people. We’re also used to a rigorous interview process. We’ve imported much of this philosophy to Ampush. No one gets hired with having 8-10 interviews and taking a variety of different tests, which usually include cause, quantitative, and brain teaser type questions.

3. Hard work. This is the core to any startup: the willingness to dig in and work ‘til the wee hours. We learned this work ethic from previous jobs. Also, there’s the realization that the mundane needs to get done.

Of course, there are ways this background has also hurt us, e.g., made us overly analytical (especially in the early days) and focus too closely on the numbers instead of products or innovation. We also wish we had learned more about computer science early on!

Jesse: Of course, no day is typical. There are a few big areas where I spend my time: recruiting, meeting with clients, and working with our internal media, engineering, and other teams to stay on course. I’m a big communicator, over communicator in fact, so I rely very heavily on email. I usually get into the office after 9am, and I work through an inbox of 100+ emails within an hour, ending every day with <10 emails in my inbox. Then I usually have a handful of calls in the morning with clients, partners, etc. Then lunch. Then internal meetings to discuss clients, product, campaigns, etc. Usually after 5pm, I do my actual “work,” be it a PowerPoint, mock ups, or something analytical. Then I head home at around 8, eat dinner, and work a bit more until about 11pm.

MO: What’s the most exciting thing on the horizon for Ampush?

Jesse: We think social and Facebook Ads are going to be BIG. What most people don’t realize is that Facebook hasn’t had their “Google moment” yet. That moment is when you develop a brand new ads product that is useful for users, high ROI for advertisers, and very profitable as a company. Facebook’s new “Verb” ecosystem is going to be that moment. Most people don’t realize it yet, but every verb–be it “Listen” on Spotify or “Read” on Amazon–will become a targetable node for a Facebook Ad. Imagine one’s click through rate when seeing TV shows or Books or Products that friends have “Watched,” “Read,” or “Bought.” It will be very powerful and fuel Facebook into a massive ad business. We are poised to be one of the few companies that enable brands and advertisers to take advantage of this!