“It is all about being genuine and speaking from the heart…”

“Jew in Jail” is the true story of the nearly six years, Gary Goldstein, spent incarcerated in various New York State prisons for robbery, due to his past addictions to alcohol, drugs and gambling.

It deals with the anti-Semitism and mistreatment he received as a minority behind bars, as well as his attempts, and ultimate recovery from those addictions.

“Jew in Jail” is a must read for anyone who has ever lived with an addiction, lack of self-esteem or self-confidence, or a family member, friend, or loved one of such an individual, and can help addicts of any age get better and go on to lead a successful, productive life.

Besides being the author of “Jew in Jail,” Gary is also a motivational & inspirational speaker on the topic of recovery from addiction. 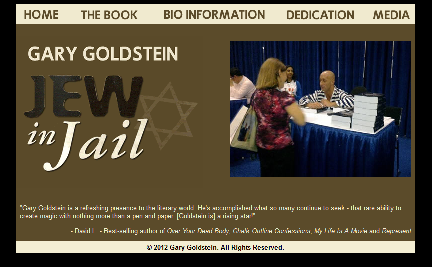 MO: Before your prison sentence would you have admitted that you were spiraling out of control with your additions to alcohol, drugs and gambling? Had you not been incarcerated what do you think your path would have looked like?

Gary: I honestly do not think I would have admitted that my life was spiraling out of control due to my addictions prior to going to prison, for the simple fact that I was in the grip of those addictions, and as such, was not thinking clearly at all. In fact, going to prison quite frankly may have very well saved my life, because if I hadn’t got caught breaking the law and continued on with my drinking, drugging and gambling, there is a good chance that it could have killed me in a number of different ways. I might have died of a drug overdose, gotten murdered by a fellow addict during a fight, or ended up in the psychiatric unit of a hospital or homeless on the streets. So, in that respect, going to prison might have been a blessing in disguise, since it was the impetus for me to become introspective and decide to get my life back on track and achieve sobriety. I did, however, suffer what I expect to be one final relapse a year and a half after being released from prison, but have now been clean and sober for over four years and seven months.

MO: I imagine you experienced a great deal of shock at the beginning of your sentence and that your situation would have demanded a level of adapting that most of us will never have to endure. What kinds of coping mechanisms did you use?

Gary: I decided to use my time in prison to finally turn my life around once and for all and become a better person. First I had to accept the fact that I had nobody to blame for my situation but myself. Then I figured that I might as well use all of this time to my advantage, so I asked the doctor to place me on a special diet to lower my high cholesterol and also worked out just about every single day to improve both my physical and mental health. Then I signed up for a computer class, because I knew that technology was changing constantly, and wanted to learn as much about the internet as possible so that I wouldn’t be too far behind once I was a free man. I attended Jewish services in order to learn more about my religion and achieve some peace of mind, which I did with the help of the rabbi at each facility I was sent to during my six years. I also chose to sign up for, and attend hundreds of Alcoholics Anonymous, Narcotics Anonymous and Gamblers Anonymous meetings to assure that I dealt with the main reason why I was in prison in the first place, which were my addictions. I was able to open up in these meetings and reveal my innermost feelings, which was very therapeutic at a time when I was without too much self-esteem and self-confidence. Furthermore, I wrote my book, “Jew in Jail,” which enabled me to document what I was going through as it happened, and knew that I wanted to share what I experienced once I came home in order to help others avoid the mistakes I had made in life. I also received continued tremendous support from my family, which was very humbling, because I knew how much I hurt them. Plus, my father unfortunately passed away from the effects of lung cancer and emphysema just 15 days after I was sentenced, and this was a tough time for my mother and family already. In a nutshell, after the initial shock wore off and I accepted my fate, I was intent on reclaiming my life away from the disease I had – my addictions – and did everything in my power during my sentence to make a better life for myself upon my release from prison.

MO: What did your turning point look like? When did you start to realize that sharing your prison experience could serve as a springboard to potentially help others?

Gary: That is a great question! I would have to say that occurred one evening during my Alcoholics Anonymous meeting. I had already been sharing for about two weeks or so, and finally felt at ease and comfortable with the rest of the members of the group. I noticed that they had accepted me – the newcomer – into their group, and realized that I could share my story and become a motivational & inspirational speaker on the outside after I was released. I just figured that if I could be this effective with other inmates, then I could certainly succeed at doing this with people who have never been to prison, but have dealt with an addiction. It is all about being genuine and speaking from the heart, but could never have taken place unless and until I regained my self-esteem and self-confidence first.

MO: Did you start the writing process for your book while you were still in incarcerated? How challenging was it to face your past demons not only personally but to decide to share them publicaly?

Gary: Yes, I actually wrote “Jew in Jail” by hand while incarcerated, and it was very therapeutic, just like attending my alcohol, drug and gambling meetings were. In fact, my papers were confiscated one day during a search of my living quarters (cube), but I was eventually able to get them back. Writing about myself and predicament really wasn’t challenging at all. Actually, it was very freeing to be able to unburden myself by letting go of all of the internal anger and shame I was feeling at the time for doing so wrong, notwithstanding that I knew I had the disease of addiction, which I quickly dismissed as using as an excuse for my actions on the day of my arrest. By sharing my demons and story publicly, it helped me to heal from within, and to this day, speaking about it and recovery from addiction in order to potentially assist others who might be heading down that same path, is extremely gratifying.

MO: How do you stay motivated and inspired?

Gary: I stay motivated and inspired by appreciating the simple things in life, like living clean and sober, and by not taking anything for granted, especially my freedom. I also derive great pleasure from motivating and inspiring others whenever I speak. I speak at drug treatment programs, hospital detoxes, schools, jails, or anywhere I am requested, and it is very important for me to give back and make amends for my past. I have come to believe that everything happens for a reason, and feel that I have a responsibility to speak out on how one can lose their way in life and fall victim to the disease of addiction. It is just very humbling and heartwarming to be able to share my experiences with others, and hope I can save lives.

MO: How have you managed to take the success of your book, “Jew in Jail” and use it as a platform for motivational speaking?

Gary: Well, first of all, I don’t really consider myself such a success, at least not if you go by book sales. However, “Jew in Jail” has provided me with the opportunity to help others by being invited to deliver speeches, which I otherwise would not have received. I have also done many radio and blog interviews, made videos, written and appeared in articles, and even shown up at court buildings and other venues, dressed in my prison costume for added effect, to promote my book and cause. I am quickly becoming known, not only as the author of “Jew in Jail,” but that “Jew who refuses to fail!” All in all, I am very proud of myself for overcoming my addictions and for choosing to help others by passing on what I have learned about this disease.