Ken Scott has significantly influenced music for decades and is known for producing music with unique and original sounds. Records he’s produced or on which he’s been the sound engineer have sold more than 200 million units.

He was one of the five main engineers for The Beatles and he produced that seminal Bowie release… and so much more. Abbey Road To Ziggy Stardust chronicles Scott’s amazing career. He has worked with a who’s who of classic rock acts including Elton John, Pink Floyd, Procol Harum, Supertramp, Duran Duran, Harry Nilsson, Lou Reed, America, Devo, Kansas, The Tubes and Missing Persons among many others. Ken has also played a big part in the world of jazz, being the first to integrate a more powerful rock sound into the genre via albums by Mahavishnu Orchestra, Billy Cobham, the Dixie Dregs, Jeff Beck and Stanley Clarke. Abbey Road To Ziggy Stardust is peppered with both provocative and humorous anecdotes and technological techniques to satisfy the most ardent fans and industry insiders alike. 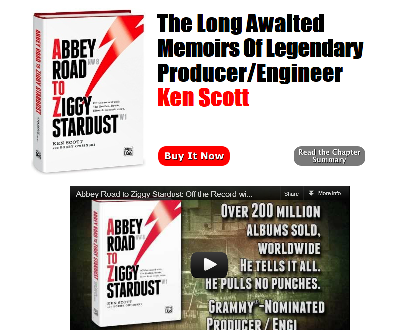 MO: What did the beginning of your incredible career look like? Where did your early passion for music come from?

Ken: I was a kid. I was 16 and being paid to turn up on a daily basis to what became the most famous recording studio in the world. There I was hanging out with some of the most influential musicians, no, most influential people in the world whilst a lot of my friends were still going to school. It was amazing.

MO: How does it feel to have influenced several generations of musicians? Did you expect the music you were making to have such remarkable longevity?

Ken: I was doing my job, if you can classify living one’s dream as a job. Rock and roll was still relatively young at that time and so none of us expected to be talking about our recordings, still hearing them or affecting other musicians 40 or 50 years on.

MO: What was it like to work with The Beatles? Are there any common misconceptions about them that you’d like to clear up?

Ken: The entire start of my career was based around the greatest band in the world, The Beatles. There is nothing more I can say than it was amazing. As far as misconceptions, the main one for me is the recurring story of how bad it supposedly was recording the White album. Complete rubbish. There were certainly incidents of rancour, but I’ve recorded albums in 2 weeks and at times the artistic temperament showed through, spending the 6 months it took for The Beatles the artistic temperament certainly showed up on occasion. The rest of the time, however, was a blast. We had so much fun.

MO: When you reflect on your career, are there any projects or albums that stand out more than the others?

Ken: They all have their standout moments. Some good, some bad.

MO: How has the music industry changed since the beginning of your career?

Ken: Obviously from a technical standpoint it’s changed drastically. I started listening to rock and roll playing 78s on an old wind up gramophone. Now I can record a band in my bedroom with much higher audio quality and get it out to a huge audience with the push of a button.

From a business standpoint, it used to be run almost exclusively by music people, now it’s attorneys, accountants and the equivalent of used car salesmen. It’s no longer about making music, only making money and unfortunately that also goes for the acts. Too many of them get into music in an attempt to become stars and make money, it used to be to make music and the fame and money were the icing on the cake.

MO: Can you share something with our readers that you haven’t told anyone before?

MO: Can you share an act or band that you think is amazing but has been overlooked or marginalized and you’d like to see given more credit and appreciation?

Ken: Back in the day a band I worked with named Happy The Man. Unfortunately their label had no idea how to sell their style of music. Today, a singer by the name of Carina Round. She’s making all the right moves, making great records and touring a lot but still hasn’t broken through.

MO: Any projects in the pipeline that you’re excited about?

Ken: There is one but it’s in the early stages of discussion and so I don’t want to jinx it by mentioning the artist’s name. Sorry.

MO: Thank you so much for your time!