“I’ve never wanted to do anything else, not even more than a hundred novels and 30 book tours later!”

Kevin J. Anderson is the author of more than one hundred novels, 47 of which have appeared on national or international bestseller lists. He has over 20 million books in print in thirty languages. He has won or been nominated for numerous prestigious awards, including the Nebula Award, Bram Stoker Award, the SFX Reader’s Choice Award, the American Physics Society’s Forum Award, and New York Times Notable Book. By any measure, he is one of the most popular writers currently working in the science fiction genre.

Both Kevin and his wife are bestselling authors. They have lived in the Denver/Colorado Springs area for 15 years and have written dozens of novels there; they run their writing business with publicity, speaking engagements, outreach, research, and productivity. 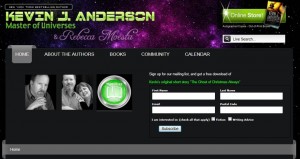 MO: How did you know that you wanted to create fiction when you were just five years old?

Kevin: I fell in love with stories after watching the movie War of the Worlds. It fired my imagination and I started telling stories about Martians, invasions, spaceships. I read everything I could, began hunting-and-pecking my first novel when I was only eight years old…and I’ve never wanted to do anything else, not even more than a hundred novels and 30 book tours later!

MO: Who were your early writing influences? How has your writing style changed from when you first started to now being a prolific writer and best selling international author?

Kevin: I read as much as I could, and as I got into high school I discovered Frank Herbert’s DUNE, which is still my favorite science fiction novel ever. I read the Lord of the Rings, and the works of Edgar Rice Burroughs, all of which helped me put together big stories in my imagination. I started writing big novels in high school. In all the years since, I *hope* I’ve gotten a little more finessed and skilled, but the exuberance and ideas remain fresh and exciting.

MO: What does your creative process look like and where do you find your inspiration? Does the core of your approach to writing remain the same for most books or do your approach and research methods vary greatly with each new project?

Kevin: I live in Colorado, so every day I am surrounded by such beauiful scenery, how can my imagination not be recharged regularly? I write my fiction by dictation—I walk along the trails in the Front Range, digital recorder in hand, and dictate the chapters in my head. Every day, even in bad weather (when I bundle up), I trudge out and get my chapters done. But the writing day involves a lot more than “writing” — I have to do research on other projects, proofreading, publicity, travel. But to me, the best part is the creation of new stories.

MO: How have you and your wife managed to take successful writing careers and turn them into a business?

Kevin: It’s a balancing act. Making up stories is one part of it, but a successful writing career also involves common sense and financial planning. The writing income is erratic, depending on when contracts get signed, when books are published (and those things are out of my control). My wife is a bestselling writer, too, but she’s got an MBA and is our business manager, so we can be smart and organized as a *business* rather than just being creative.

MO: What were some of the challenges or obstacles you faced when developing and launching WordFire Press?

Kevin: Publishing is changing dramatically as traditional printed books and large brick-and-mortar bookstores go through major turmoil. Two years ago, the Borders chain was responsible for about 40% of my sales, but they’re entirely gone now. In my career I’ve had many novels published that eventually went out of print. Now that I have a much larger fan base, they want to read those books, which aren’t available anymore. Thanks to the eBook revolution (with Kindles, Nooks, iPads, and many other reading devices), all of those titles have a second life now. Rebecca and I have put up dozens of our old titles, and we’ve found other authors in a similar situation, including classics by Frank Herbert, Bill Ransom, Brian Herbert, and a story I wrote with the drummer from the rock band Rush. I’m also doing some original fiction to direct market to my fanbase. We’re learning as we go and strugglling to keep ahead of the curve.

MO: You’ve written hugely popular novels for both the Star Trek and Star Wars series. What was it like to take a hugely popular and beloved series and write about characters and places that are already familiar to so many of us? How were you able enter another world, that someone else created and make it your own?

Kevin: I confess, it was very scary! But since I was a huge admirer of both Star Wars and Dune, I felt I’d been doing my homework all along, as a fan. I did my research in those universes, just as I would do research on any historical period or geographical/cultural place. And I loved it, getting to play with some of my favorite characters. The fans have enjoyed them enough that I can make a career out of doing what I enjoy most. I am allowed to spend the day making things up and playing with my imaginary friends — in gorgeous Colorado.