Lando is the founder and principal of the 1 year old company, Rebel Luxe, LLC. Prior to launching Rebel Luxe, Lando was both a music producer and popular culture expert who founded the popular internet radio station Ultimate-80s.com as well as Awesome Avenue.com, a retro and vintage oriented pop culture e-commerce site. 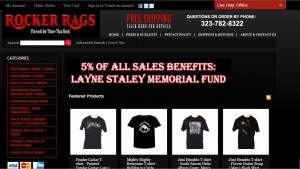 MO: What inspired you to launch Rocker Rags?

Lando: It was a couple of things actually. I was running Awesome Avenue.com at the time of Rocker Rags.com’s conception, and after the economy took a downturn, we found ourselves struggling to find new and especially repeat customers. We had always had a music angle to Awesome Avenue. In fact, our tag line for that website was “Where Fashion, Music & Pop Culture Intersect,” but the site struggled to find a strong customer base. After speaking with a friend who is a consultant for fashion oriented retail stores and websites, he suggested that I find and focus on my true passion. He went on to say that the main reason that Awesome Avenue wasn’t really working with customers is because they didn’t truly understand the website. You see, we were carrying this vast array of products that we thought blended well together, but to the typical e-commerce customer who was focused on finding one general item, the website was a bit too discombobulated. Not in its layout so much, but in its overall product offering. I’ll give you an example – Awesome Avenue’s general inventory consisted of retro and pop culture oriented t-shirts from classic tv shows like Dukes of Hazzard and Sanford & Son, along with music t-shirts from rock bands of the 1960s – 1990s, as well as vintage and retro oriented fashion brands that had made a resurgence including Original Penguin, Esprit, and Vuarnet sunglasses. To top it all off, we also had a large selection of pop culture toys like Rock ‘Em Sock ‘Em Robots, the Snoopy Snow Cone Machine, Mr. Potato Head, Rubik’s Cubes and full sized Ms Pac-Man, Donkey Kong, and Defender video game machines. While in a brick and mortar store this diversity would have been both welcome and made more sense to the general populace who walked in (especially if the store was decorated right with period music playing), on a website that didn’t have the support of a brick and mortar store, it was very unclear to the customer what exactly Awesome Avenue was. However, what we did find with Awesome Avenue is that our music t-shirts had the greatest sell through year over year regardless of season. Add that to the fact that I’m a music guy, and the music oriented products were really what I was most passionate about.

MO: You’re a serial entrepreneur. What experience did you gain from your past ventures that you were able to apply to Rocker Rags?

Lando: That if you build it, they won’t necessarily come. Most importantly, though, you can’t do it alone. Regardless of what business you’re in and even if you’re a one man show with no employees, you still need some sort of assistance to propel you to the next level. Rocker Rags.com, is just over one year old, but in its first year, which was really not a good retail year in general, we surpassed what Awesome Avenue did in a decent year. However, it wasn’t without outside help. We have been fortunate to get involved with a good marketing agency that successfully builds bridges between Rock music artists and products, plus our shopping cart and webhosting company has been fantastic in helping guide us along the paths of the most successful means of online marketing. In a very short period of time, many of our products are on the first page of Google.

MO: Where does your passion for music come from? Can you remember the first song you ever heard and fell in love with?

Lando: I’ve been listening to Pop and Rock music as far back as I can remember. The first song I ever fell in love with was Glen Campbell’s “Rhinestone Cowboy.” I think I was around 3 years old when I heard this and became enamored with music ever since. I’m not sure where the passion per se came from other than simply being introduced to music at such an early age. I grew up listening to the radio, and I was fortunate to be raised during the 1970s and 1980s, a very unique time in terms of popular music so I was able to get introduced to music from all different sorts of genres that had crossed over into the mainstream. Artists as diverse as Rush and Yes to Neil Diamond and Phil Collins to Talking Heads and New Order to Van Halen and Alice in Chains – all of these are artists that I listened to regularly because they received airplay on Pop music oriented radio stations. And I never stopped liking them, as they, and more, are heard regularly here at the RockerRags.com studio.

MO: Where does your entrepreneurial spirit come from? Who were your early influences or inspirations? Have you had any mentors during the course of your career?

Lando: I would say that my entrepreneurial spirit comes from me being an only child. It’s not that I never learned to share or work well with others, because I do share and I do work well with others. But being an only child, I spent a lot of time by myself, and in many ways when I was younger, I preferred that. Then when I started to work in the “corporate world,” the individualistic thoughts and goals I envisioned both for myself and for the sake of the company I was working for were not necessarily considered beneficial for the organization at the time. The whole sort of jumping through red tape scenario and being told no when an idea was viable – this was a concept I didn’t understand and really had no patience for. So, early on in my career, I came to the conclusion it would be best for me to take the helm of my life and career. And thus, another entrepreneur was born.

My inspirations, I would say, are successful people. In regards to Rebel Luxe, I would say my biggest inspiration is my cousin Lee Warner, who unfortunately passed away about 7 years ago. He started and ran a business that provided strawberry flavoring to food manufacturers and was extraordinarily successful with this venture. However, it’s not simply his success that I am inspired by – it was his attitude towards life – he appreciated and had “the finer things,” but he didn’t let that define him. It was his kindness to others and his appreciation for enjoying life that inspires me. Other business inspirations include Phil Ruffin, the billionaire real estate investor, of whom not much is known because he prefers to keep a low profile, which is something I, myself, thoroughly admire. I’m more impressed with those who don’t feel the need to advertise or “showboat” either their success or ventures. Both should speak for themselves.

However, I can’t overlook the other side of my personality – that of the being a music guy and there are many musical artists who are inspirations for me. In fact, there are too many to list because of my love of music, but if I had to choose who has been a major inspiration for me – I would have to say David Byrne. His started his career as a pioneer in the New Wave sound of the late 1970s – 1980s with his band, Talking Heads, all the while converting his creative energies into other forms – including collaborative experimental musical side projects, visual art, films, and, recently, entire musical installations. But I’m also quite impressed with other musicians for entirely different reasons such as the members of Rush and their attitude towards success. These guys are considered some of the best at their craft, yet they never really allowed themselves to succumb to their fame. In my opinion, these guys are a true class act, because all they ever cared about was simply being really good at what they do.

MO: Running an ecommerce site is not always easy. What advice would you give someone wanting to start an online business?

Lando: Have patience. It’s pretty much a guarantee before you even launch that you’re not going to be an overnight success, especially if you don’t have any sort of brick and mortar operation to support or garner you a reputation. It’s an uphill battle right now, as you’re battling a struggling economy against large behemoths like Amazon and countless websites and brick and mortar stores for the same customer. However, you can’t let that be a discouragement. My advice is do your research to find your market niche, make customer service a priority, learn about the successful means of online marketing, don’t think you can do it all yourself, and go in with the attitude that if you’re going to do this, be the absolute best at it that you can be. If it takes time then it takes time. But if you are going to go into this field, go at it 100%.

MO: You’re a big supporter of the Layne Staley Memorial Fund, an organization that helps musicians struggling with drug addiction get the help they need for recovery. Can you tell our readers what influenced your decision to support this charity in particular?

Lando: Rock music has lost too many artists because of addiction. I chose the Layne Staley Memorial Fund for two reasons, one which is personal and the other which is for the greater good. The personal reason is I’m a big Layne Staley and Alice in Chains fan, and by donating to the fund, I feel a personal connection to Layne that I never had the opportunity to have when he was still with us. The other reason is because of what the fund attempts to do – help musicians struggling with addictions overcome their disease. Again, the music community has lost so many artists to addiction – in the last year, alone we lost Mike Starr, also from Alice in Chains, and Amy Winehouse, both who struggled with addictions.

From the conception of Rocker Rags.com, I knew I wanted to give a percentage of sales to a music charity, because we are selling and making money from these people’s creativity. In my opinion, by not giving back to the music community would be wrong. Plus, supporting this charity legitimizes Rocker Rags.com to both the customers as well as the Rock community. The customers feel good because they know that by buying from us, they are helping another talented musician get the help they need and the music community views us and understands that we’re not simply trying to make a dollar from their creativity by hawking a bunch of goods with their logos and artwork, but that we care as much for these artists as they do for each other. Also, and this is really unfortunate, the Layne Staley Memorial Fund hasn’t received much recognition, and I feel it’s important for people to understand that this fund exists and the good it does.