“I have met my share of highly educated or supremely talented failures but I have rarely encountered a focused, persistent entrepreneur who did not ultimately succeed”

Manufacturer of the LongShot Impact Recorder, the most used teaching, training and club fitting aid in the world. This product was developed, patented and manufactured by LongShot Golf. They have retail distribution in major chain stores and golf catalogs as well as a factory direct consumer web site. They supply the major OEM club makers in custom form for club fitting, demo days and testing, including: Nike, Taylor Made, Callaway, Titleist, Mizuno & more. The LongShot Impact Label is regularly used by leading golf teaching facilities and has been featured in numerous golf training videos and golf club sales promotions. 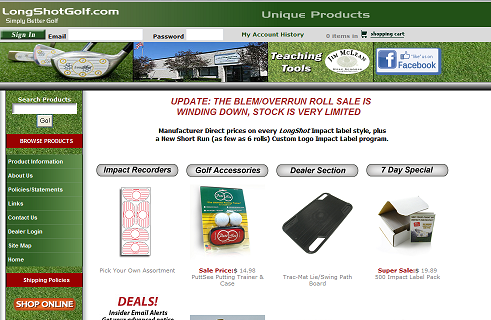 MO: What influenced your decision to launch LongShot Golf, Inc.?

James: LongShot was launched in pursuit of two very distinct goals. If you are in a business that depends exclusively on the economy of South East Michigan you quickly come to realize that you are at the mercy of the boom and bust cycles of the auto industry. Any national recession basically becomes a depression of sorts for most local businesses. One of the worst cycles of this type occurred in the 80’s so LongShot’s first purpose was to supplement and eventually replace a business that had been decimated by the downturn. The second goal was to launch a business that would not be primarily dependent on any single region. Both goals were achieved in that LongShot has been in business for over 20 years and only a small percentage of our sales are locally derived. National distribution as well an increasing portion of export and direct web sales have helped to stabilize overall revenues.

MO: Can you talk a bit about the development process behind designing and producing The Golf Recorder; a new, sustainable product for the golf industry?

James: The process started as a direct result of the desire to play better. I have never been much of a lesson taker preferring to work my way through things on my own. My reasoning was that making solid sweet spot contact would lead to an overall improvement in my game. In order to do that I needed an accurate way to track my contact point. I was actually surprised to find that no inexpensive product was being produced that could measure something that basic to good golf. I set out to find an acceptable combination of materials that would show the impact point, not add weight to the club and not alter ball flight to any significant degree. Of course cost was always a consideration as was the ability to customize the product for different markets and uses. The final mix of design, materials, financing, promotion and market identification took about 5 years before I would say that LongShot was a sustainable company with a product that had staying power.

MO: You started your first company before you were 15 and your first corporation during your final year in college. Where does your strong entrepreneurial streak come from and what major lessons did you learn from your early ventures?

James: From as far back as I can remember I have had an interest in business, a desire to work for myself and a certain feel for how it all functions. Some people can paint, some can sing, others can hit a major league fastball … I consider the successful business people I have met to be no less talented. Early ventures taught me that while natural talent and a solid core of business knowledge are important, they both take a back seat to persistence. I have met my share of highly educated or supremely talented failures but I have rarely encountered a focused, persistent entrepreneur who did not ultimately succeed.

MO: Where does your passion for golf come from? Can you remember the first game you ever played and what you were thinking?

James: I don’t think I have a passion for golf as much as I value the time outside to wind down on a real scenic course. I actually enjoy the setting as much as he game itself. That being said, I do have a passion for doing anything I attempt as well as possible, so the desire to improve is always there. I actually didn’t start playing till my mid-twenties and was totally self-taught. I still remember my first game at a public course where I was paired with twin brothers who happened to be 85 years old. They played 3-5 times a week and I had many more occasions to play a round with them. To this day I use many of the great short game tips they taught me. It occurred to me that golf was the one activity that kept me from thinking about my business for a while. Any entrepreneur knows that their business is like a hyperactive 4 year old seated behind them on a cross country flight … you never forget it’s there. For me golf seemed to get that 4 year old to at least take a short nap.

James: My biggest risk was one of my first. It consisted of going all in from a business and personal standpoint to try and save my first major startup during the recession of the early 80’s. For most of the country it was a real bad recession, for the Metro Detroit area it was far worse. This was a business I started as I was finishing my last year of college and it grew to be the largest dealership in the world for the brand we handled. It had made me a millionaire on paper by the age of 27 and with the bravado of youth I was convinced that I could buck the economic headwinds. This was truly a case of being someone who was too inexperienced to know what he didn’t know about how things really worked. Of course my employees, creditors and suppliers were more than happy to have my partner and I pour everything we had into holding on while hoping for a turnaround that never came. It wasn’t until the manufacturer of our main product line packed it in that the futility of it all became impossible to ignore. I could fill a book with the various lessons learned under fire during that period. Looking back on it many decades later I can see that it was without a doubt the most expensive, painful and ultimately valuable educational experience I ever lived through.

MO: Can you talk about the inspiration behind your new, premium, club identification label line?

James: I started thinking about this product line when a friend of mine showed my some identification labels he ordered for his clubs. My first impression was that they were small, hard to read, they lacked the room for more than one phone number and there was no space for an email address. They also looked like one of those little bands you see on the leg of a carrier pigeon, certainly not something I would stick on my $400.00 driver. A few years earlier we had acquired a new short run digital label press and I was eager to see if that machine would be able to produce something that really stood out. We spent nearly 18 months searching for the perfect mix of durable materials that would be able to be customized by our digital machinery. We finally came up a with a package that offers three full lines of contact information, multiple color choices, a unique shape that runs down rather than around the shaft and the ability to include custom logos. These will be available factory direct on our web site by late summer 2012.