“If we can change just one closed mind in the back of the room by luring them into showing up to meet a celebrity, then we can sleep well at night.”

Reel Management was founded by Marc Marcuse, one of the stars of the NBC show “Average Joe”. After appearing on the show in 2003, Marc had met many reality stars by appearing at various events, charities, and TV cameos. He soon realized that the market for reality stars was virtually untapped, even though fans around the world wanted to meet them or see them back on television. Once he compiled an initial list of stars available for appearances, he set out to bring the world of reality television to local venues and further media exposure. 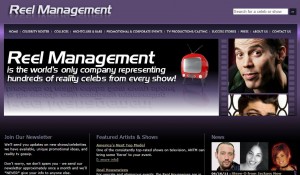 MO: How did you start Reel Management with an initial investment of only $600?

Marc: I was exceedingly lucky that I was able to start the business with a small initial investment. Because I had very technical knowledge (coming from the dotcom industry) I was able to design the website on my own, create my business cards and logo, and had a friend provide me with a lead list. With an unlimited cell phone plan that I had, calling around the country didn’t incur additional expenses. The most expensive part was the incorporation fee!

MO: What were the biggest challenges you faced as you started to develop the company?

Marc: I think the hardest part was not knowing if it would eventually work out. Everyone thought I was crazy, but I knew that this was a niche that wasn’t being served since I was doing appearances myself while I was still famous. Despite starting on a shoestring budget, I still had to eat during that time. I was making a six-digit salary a year earlier, but to follow my dream I was eating ramen again to save money (it was like going back to college, but at 33 years old). There were lots of sleepless nights wondering if I was chasing windmills. Now that the business is successful it’s easy to forget that it wasn’t pre-ordained that way. The first year in business, we made precisely zero dollars. Year two we broke even, and year three we were in the black. I’m quite proud of that, but there were 2 ½ very uncomfortable years – and I recognize that that’s pretty easy for a new business.

MO: Who are you most popular celebrities at the moment?

Marc: Right now the Real Housewives are in high demand for marketing and promotional events. Project Runway is always huge for us, they have a very broad demographic appeal – we can book them for department store appearances, mall tours, brand spokespeople, and even college lectures. We’ve teamed up as middle bookers for a few other big names, and outside the reality realm we actually just picked up a Glee cast member. We’re working with her because she’s simply the coolest person ever, and she’s got a great fanbase.

MO: How have you taken your experience from working at companies like Microsoft, Sony, Disney, etc. and incorporate that knowledge into launching a small business?

Marc: I think that a critical part of what small businesses miss in dealing with large companies is how to integrate yourself into their culture in various ways. For example, don’t send emails you need a critical answer for on Thursdays late afternoon or Fridays all day – large businesses are mentally checked out by then and are finishing up the week, so by the time Monday rolls around you’re off the radar and will never get a reply. I think most small businesses deal with trying to look professional on a smaller budget, and to do that you really need to know the key points of how a large company works and target that part of the culture when interacting with them. If you work from home, keep your pajamas on under the table when videoconferencing but wear a jacket and tie above the table – both literally and metaphorically.

MO: Who or what has influenced or inspired you during the course of your career?

Marc: I’ve had some amazing bosses, but some really horrific ones too. I think my father really ingrained a perspective of what matters into me, and although I work hard I still know what’s important in this world. When I was fired once from a job, I called him crying that I just didn’t fit in. He told me that he was proud of that, because no one who ever fit into big corporate culture did anything creative to make the world a better place. I really like that, it’s what pushed me to become an entrepreneur later in life.

MO: What’s been the most fun aspect of running a company like Reel Management?

Marc: Where do I begin? I’m a reality TV junkie so it’s fun working with crazy but interesting people all the time. I get to travel a lot, so it’s always fun waking up in the Bahamas thinking ‘how did I pull this off’? I started lecturing at college campuses, I teach students how to make connections and land a good job (I call it a Career Bootcamp). Universities teach students calculus but never explain how to negotiate for more money when they get a job offer, so turning them into job-hunting ninjas is a lot of fun for me. We do a lot of good in the world with our college lectures and charity events as well, it’s amazing to see how much impact a celebrity can have by telling their story of dealing with abuse, homophobia, prejudice, or other hurdles. If we can change just one closed mind in the back of the room by luring them into showing up to meet a celebrity, then we can sleep well at night.