“Behind the curtain, people let their guards down, their creativity flow, and take the most honest and beautiful self-portraits imaginable which result in a rare glimpse of who they really are.”

Matt Gassman and Jacob Stewart— one an architecture student, the other a budding photographer — cultivated their friendship throughout their college years, staying up late amidst the hazy afterglow of rowdy weekend nights and contemplating their respective futures.

Their aspirations weren’t limited to their majors, and an entrepreneurial spirit colored their conversations. While photographing a wedding reception, Jacob witnessed the popularity of an old photo booth the guests used to commemorate their special day. As the guests frolicked around the contraption, a flash went off in his head — “we could do that better.”

On a whim, he pitched the project of building a booth to Matt. They spent the following months designing and hammering out their booth, planning to showcase it at a year’s end holiday party.

The Traveling Photo Booth rents the Greatest Photo Booth’s in the Galaxy to private events such as weddings, corporate events, graduation parties, bar and bat mitzvahs and everything in between. 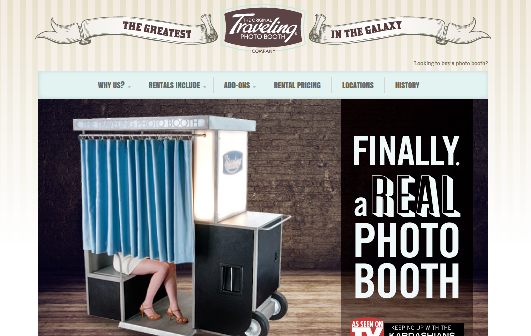 MO: Have both of you always had entrepreneurial spirits?

Jacob: I’ve always been selling something. During elementary school, I made money as a magician by doing paid gigs on the weekend for nursing homes, Boy Scout Troops and the like. During middle school my parents bought me an entire case of Snicker Bars and I spent a week pedaling candy bars to hungry classmates until my locker got raided by the Principle. I got a bit wiser, learned about supply and demand and went on to sell Skittles on a bus to summer camp, incited a Skittle food fight, and then jacked-up my per-bag price and made a killing….for a 13 year-old.

Matt: Not really. For a while I was young (and possibly stupid) and wanted to make art or buildings more than money. Jacob convinced me this was a business in which we could do both those things.

MO: Why do you think that photo booths have such a great appeal after all these years?

Matt: I have a couple hundred pictures on my cell phone and only a couple hanging on my fridge. In some ways, the turn to digital photography has added special significance to the printed image.

Also, something special happens when the photographer steps away from the camera and the photo booth curtain closes. People are free to be their most authentically goofy selves. The voyeur in us all loves to see others be goofy, and the social nature of special events allow people to grab a group of friends or family and share in the goofiness.

Now that most modern photo booths print two copies of each photo strip (FYI we invented that too – horn toot) rentals have become really interactive. The host of the party essentially pays for the photo booth to entertain their guests, and guests return the favor by making a spectacular guest book filled with messages and photo strips to entertain the host for years to come.

Jacob: We’ve taken millions of photos with our photo booths and no two photos are the same. Our booths aren’t just taking photos. Behind the curtain, people let their guards down, their creativity flow, and take the most honest and beautiful self-portraits imaginable which result in a rare glimpse of who they really are. That’s the magic and appeal of a photo booth.

MO: Can you talk the process of taking your concept and turning it into a reality? What were some of the obstacles you encountered along the way and how did you overcome them?

Jacob & Matt: Trial and error. We have never said, and will never will say, “It’s good enough”. We’re always asking how can our booths, our photo strips, and our company be better and then following through with the necessary (and often expensive) steps to take The Traveling Photo Booth to the next level.

In the past, the big challenge was growing our business without experiencing a drop-off in quality. To maintain quality, we’ve transformed basic business operations into systems that are replicable and easy to execute. Franchising has helped us a lot in this regard.

MO: What’s so great about Traveling Photo Booth? What features are you most proud of?

Jacob: We have a great company culture and we love what we do. Everyone in our organization deeply believes that we really do rent The Greatest Photo Booths in the Galaxy. And, our photo strips are not only of the highest quality but contain priceless, once-in-a-lifetime moments that will be treasured by our clients and future generations. As far as features, we’re extremely proud of our proprietary image enhancements that create not only technically perfect photos (sharpness, exposure, contrast and color rendition) but flattering, retro-rific photos as well.

Matt: We bring pure joy to dozens of parties every weekend. That may sound overstated, but each and every event is filled with tons of people going completely ecstatic over the booth. I’m most proud of our open back design. The booth takes frame-filling photos of 2-3 people, while keeping our booth footprint small. Opening the back can allow groups of 10 or more to get in on the fun. It’s a perfect example of how thoroughly we thought these things out. We didn’t build a huge booth that took terrible pictures of small groups, or a tiny booth that would make large groups an impossibility. We built the best booth for both.

MO: What influenced your decision to franchise your photo booth?

Jacob & Matt: We considered just selling the photo booths, but felt doing so undervalued our unique skill set with regards to marketing, brand-building and innovation. We even considered operating from a centralized location and renting booths nationally ourselves but decided although it was possible, the missing link was the local boots on the ground with local knowledge, local passion, and a stellar local reputation. The event industry demands a local presence who’s accountable and can make each event “special”. Franchising offered the unique opportunity to fund, market, and develop products on a national level while having passionate local experts selling and executing flawless rentals.

MO: If I could grant you one business related wish right now, what would you ask for?

Jacob & Matt: A pot of gold? Short of that, we’d settle for a gang of Entrepreneurs lined up, ready to start their very own photo booth rental franchise.