“…it didn’t take long for us to realize that the tools available for artists weren’t up to speed, and we thought we could make something better.” 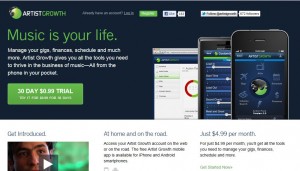 MO: What circumstances brought the two of you together to form Artist Growth?

Jonathan: Matt and I, we’ve known each other over ten years. We met in college. Matt was walking down the street with a guitar, and I saw him and yelled at him. That was the day we met. Really quickly we turned into friends and started playing music together, and ended up moved into a house together, having an artist co-op.

We were touring, riding, and running a studio out of our house. We did that for a couple years and we were having a lot of fun just playing music and kind of being wild. Then within about eight months of each other, we both found out we were going to be dads. That kind of changed a lot of stuff. Matt moved back to Nashville from Knoxville – we went to university of Tennessee from Knoxville. I stayed here and finished grad school and started teaching kindergarten for a living, and Matt went back to doing data management in Nashville.

So we both took a couple of years off of music and even from each other, we didn’t speak a whole lot at the time. Then it was really cool because I started making a record after my second year of teaching – I decided to get back into it – and I knew if I was going to do it and justify taking the time away from my son, staying up late, having band practices, and still working all day at the day job, I was going to have to take it a little bit more seriously.

So we got out on the road, and I ran into Matt one day and we just hit it off like we had seen each other yesterday. We immediately started talking about: Where are you playing? Who are you talking to today? What are you using? Who’s making your posters? What websites are you using? You know, general strategies. That wasn’t something I had shared with artists or any other friends. So, it didn’t take long for us to realize that the tools available for artists weren’t up to speed, and we thought we could make something better. That’s when we started making business plans and getting it together.

Matt: That sums up the background on how we came to the idea of trying to create a piece of software. And I think the then the journey changed, at that point, when we started meeting with people who were already well-experienced and well-versed in the software space inside the music. That became a whole new part of the journey at that point, from where Jonathan left off.

MO: Where did this idea originate? How did you come up with it?

Matt: Well, we basically just sat down and said if we can make our computers and phones do everything we needed to have them do, what would it be? And there was a whole lot of stuff of what we wrote down, and it became a process of us refining, whittling away what was already being done in general sense, and refining the things that really weren’t being met by anyone else. Artist Growth was the result of sixteen to eighteen months of refinement on a very big idea, focusing in on what was manageable and executable.

We refer to it as a software platform because it does have a native iPhone app and native Android app, but it exists on the web and it’s also optimized for tablet use. So it’s really any point of entry, any device that you can get on the Internet and you can utilize the Artist Growth platform.

MO: Let’s get into the details a little bit here. What exactly is Artist Growth and what can it do for musicians?

Jonathan: What Artist Growth does is that it takes all the tools that you need to run your band like a business – it fits all your contacts, your finances, and scheduling – all of those things you have to do – on a really simple, easy to use interface. Then also what it does is that it pipes in expertise. Because somewhere along the way we figured out that in the music industry, like many industries, there are certain ways that certain things have to be done – like the press release has to be sent, eight weeks out, in a certain format. Learning that was an education and there was a thousand things like that, so we’re piping in certain things need to be done virtually. Two of the features are called AGtv and action packs, and those are mentoring-type features that we piped into the toolbox so you have everything you need to run the business, and any questions you have about it are right at your fingertips as well.

MO: Tell me about your funding for the businesses. How did you prepare for and approach this topic?

Matt: In five words, Artist Growth is career management and career mentoring. Once we felt like we had a rough draft of a business plan that we had shared with close friends and family, who have been associates that had worked in the entrepreneurial community before, and they sort of said okay. We know one local entrepreneur who’s actually a health care entrepreneur. He was inspired by the concept and the business, and so he sort of introduced us around Nashville to other people who make investments in the entertainment space or the technology space. It was about five to six months that we were able raise to a million, just going into a meeting after meeting and making presentations. Each presentation informed the revisions we were making to the slide deck or the business plan. Eventually, we got put in the same room with the right people and the business was compelling enough for them to jump on board.

MO: How are you going about promoting the business to musicians.

Matt: One of the things we’re doing is continuing to monitor the platform and making sure it’s doing and functioning, and continuing our beta open platform. We have a publicity firm in NYC that is working with us, and we are using our network inside of Nashville for the local launch which will be at the Country Music Hall of Fame. And that’s all the things that go into planning a large event that we’re having to deal with. But just delegating out the details of the event and mostly using our personal contacts in the press and the music industry in Nashville and utilizing the contacts of our PR firm.

First and foremost, it gets them on a track to be able to quantify their career. So when they start interfacing with anyone on the business side, whether it be an agent, a manager, an independent record label, a larger record label, they will have data that they can present to people that shows their touring history, shows their inventory and merchandise sales history, and shows their record and shows how they’re managing their expenses on the road. So they’ll actually be able to start putting together a quantified picture of what their career looks like, which is something that has become necessary now. I think that’s the first thing that they’re going to start learning how to do, and they’re going to have all the tools they need to start putting that picture together in a really clear and quantifiable way.

Jonathan: It’s almost like creating a situation where artists and the people on the business side can finally speak the same language, numbers in that quantifiable way. Another thing it’s going to do for the artist is distribute their workload because there’s so much to do. Especially when you’re running your own career – between the art but also you’ve got to promote, prepare, organize, and go out there and hit the road, and there’s so much to do. It helps distribute the workload evenly across your time so you can get the most value out of every day and keep up with everything that there is to do.

MO: What’s the cost of the Artist Growth platform?

Matt: It’s $4.99 a month. That gains you access to the entire platform and you are able to utilize the application, which would be a free download from the app stores that go with the software platform. And inside, it’s very important from us from the start, that people who are just starting out in their careers could utilize Artist Growth, especially the mentoring aspects of it. And as their career grew, that the platform would scale with them.

So we designed it have value for a beginner and it can scale all the way up to an enterprise level. $4.99 gets you access to the entire tool suite and as you grow there are opportunities to add on and create larger teams under one roof. You can actually link accounts and distribute workload across a large group of people. And in order to create a big team like that, there are add-on costs associated with that because managing that from a server perspective has higher costs.

But a beginner could even get into the platform, into AGtv, for less than $4.99 a month if they wanted to. They could download the app, create an account, and do nothing but subscribe to the AGtv mentoring portal, and that would just be the cost of however many channels they wanted to have access to. It could be anywhere from as low as $1.99 for the very most basic access. To get access to the entire suite, it’s $4.99 a month in its most basic.

The responses have been pretty overwhelming from people. It’s been very good. We haven’t gotten a whole lot of criticism. There were some bugs early on that we had to work out, which is typical for any new platform when you go into beta testing. But as far as it being utilized by other musicians that have looked at it, it’s been a really positively overwhelming response.

Jonathan: One thing I just want to add is the reason we made it to scale is that we are artists and we made it to help artists like ourselves. If we ever wanted to sell anything that they didn’t need, it means that we wanted to make sure there are access points at every level of your career. Hope that we can make life easier for a lot of people.

MO: Thanks for sharing your business with us today.