“If it was easy, everyone would be doing it.”

Michael Dalakis entered the field of IP law in 1994 as an electro-mechanical engineer with a small IP law firm in Arlington, VA. From there, for tenure of nearly six years, he served as a patent examiner for the United States Patent and Trademark Office (USPTO), examining patent applications in such fields as photography, photolithography, printing, motion pictures, image processing and semiconductor manufacture.

As an entrepreneur at heart, in 2003 Michael stepped away from the “corporate world” and co-founded ENEXDI, a DC-area high-end document management company targeting the most discerning clients in the legal and proposal markets. Building a business focused on customer service and a solution-based approach to client matters in a much-maligned industry, Michael helped propel ENEXDI to a multi-million dollar business within 3 years.

Michael is both an intellectual property attorney and an entrepreneur. In founding Panovia Group, Michael sees the opportunity to share his entrepreneurial passion with the firm’s clients, inspiring them to develop their ideas and talents and take them to market.

Panovia Group is a Washington, DC based business consulting firm focused on cultivating and monetizing ideas and talent from conception to maturity. 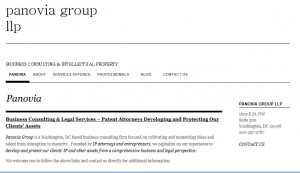 MO: What inspired you to start Panovia Group? Did you have an “aha” moment or was it something that you had been planning to do for a long time?

Michael: The answer to that lies somewhere in the middle. After law school, I practiced IP law at a large law firm. Unfortunately, at that firm I became pigeon-holed into work and clients that I did not find interesting. Ironically, while on working on a large case at that firm, I was responsible with dealing with a lot of our third-party litigation-support vendors. I quickly realized that these vendors were billing us an incredible amount of money per month and doing a poor job meeting our needs. After some back-of-the-napkin analysis, I decided I was going open up a company that supported law firms during litigation at a more comprehensive level than I had seen with our own vendors. I spent a year pestering one of my good friends to join me and he finally caved in. He was coming up on partnership at Accenture but was killing himself to make it. We opened up shop in late 2002 offering litigation support and consulting and it wasn’t long until we realized there was an untapped business model in supporting proposal development to large consulting companies such as Accenture. Once we claimed our two niche areas, we found a lot of success. In 2008, I began to feel the itch again to build something new. The first company had matured and the market was becoming saturated. So I agreed to sell out to my partner and do something new. I wanted to create something a little unique that would keep me excited over the long-term. I sat down with an ex-colleague of mine from the old law firm and dumped my ideas on him. It was hard to clearly define what I envisioned Panovia Group to be, but I think our tag line captures it well. For a very long time, I had many ideas for new products, processes and technologies and never did anything about it. I figured there were many people in that same situation whether they didn’t know how to make something from an idea or concept or what to do after they created something and beyond. So that is what I saw Panovia doing – partnering with creators and idea-people to grow, protect and monetize their ideas and creations.

MO: Before founding Panovia Group you had many professional successes. I am interested in how you managed to step into a role of COO at a small company that had been in business for 16 years and revamp how the business was run across the board. Was it hard to get everyone on board or were they open to change? What changes did you implement?

Michael: The small business is run by a friend of mine that I met a long time ago but did not know very well. A few years ago she was changing the name of her business and was looking for some guidance in trademarking the name. She remembered that I did that kind of work and we discussed it. After working a bit more together, I saw that she had built a successful business but given her incredible reputation in her line of work, there was so much potential not being realized. When describing the vision she had always had for her business and her frustrations getting there, I saw an opportunity for Panovia to her. I started working with her last October and have revamped the entire business process. Costs are down significantly, revenue is ramping and her vision of expanding into multiple locations is now finally a reality and should happen in the next 12-18 months. And, in my eyes, we have only scratched the surface of her potential. The processes we have implemented are much simplified and thorough making them repeatable and reliable. It has been a very enjoyable and fulfilling process so far with the occasional hair-pulling moments. As with any small business owner, she is very protective of the business and nervous about change, especially when she has been doing things the same way for 16 years. But with each progressive indication of success, her trust in what is happening is growing quickly.

MO: Where does your clear passion and love for entrepreneurship come from? Who or what were your early influences or inspirations? Have you had any mentors during the course of your career?

Michael: I am a huge believer in Montessori education. I was a Montessori kid through the first half of sixth grade. I think that was the origin of my passion. I think Montessori teaches you and gives you the tools to solve problems and as an entrepreneur that is how I see things. There are problems that need to be solved and I see them everywhere. Another influence for me was my younger sister. She started her own business a few years before I started mine at twenty-four years old. Her success and happiness in being out on her own was a big help in overcoming my fear and hesitation of taking the leap myself. I have had a lot of mentors along the way starting with my mother. She was a single mom from another country that earned all her accomplishments with hard work. She was a great example for both my sister and I. Interestingly enough, many of my clients were also mentors and advisors. I think a lot of the very successful people that we worked with saw us leave successful careers to start a business and admired us for it. They wanted our businesses to make it and took a genuine interest in helping us in many different ways. That felt really good.

MO: I love that you said that “every project gives (you) the giddiness of starting a new business”. I rarely hear the word “giddy” used when people speak about their professional lives. How are you able to maintain a sense of genuine excitement about your work when so many people are jaded by what they do?

Michael: The vision I had for Panovia was to always have this giddiness and never lose it. I don’t want my work to ever feel like a job again. That is very challenging to accomplish especially if you are providing services but it can be done if you are determined to make that happen. If you are able to keep your mind interested and engaged in your work, the risk of boredom and dissatisfaction decreases significantly. I tell people that when you are starting or running a business there are three things to strive for: money, passion for your work and quality of life. If you can get two of those three you’re your business you are doing very well. If you can get all three, you have found utopia. To make that happen, you need to be mutable, ready to make the changes necessary no matter how scary to find that utopia. It is not easy, but if it was easy, everyone would be doing it.

Michael: This list could go on forever! I think that the most difficult line to walk as a business owner is budgeting. In the first business we hired a business development team on the cheap because we were risk averse. We missed three years and hundreds of thousands of dollars in growth opportunity trying to save a few thousand dollars on salaries. I think if you decide to hire talent, hire talented talent. Don’t cut corners there. There are better places to save money. For example, one of my greatest lessons learned was from a mistake that ALMOST happened and by sheer luck it didn’t. In my first business we had outgrown our space and were looking for new space. We were close to signing a lease on some very attractive space that was much more costly than the space we were leaving but we were growing very quickly and were filled with confidence. At the eleventh hour the deal fell through for the new space as a different tenant moved more quickly than us and we couldn’t have been luckier. The recession hit shortly thereafter and our growth stalled. That lease would have shut us down but instead we survived while many of our competitors went out of business. We found new space that we improved modestly and our clients were impressed that we made something out of nothing. Low overhead is where you should be looking to save the money.

I think one of the most critical things that a lot of people skip or don’t give enough time to is planning an exit strategy. A very wise person once told me that you should have an exit strategy in place from day one no matter if you change it several times over the course of your business so that you are working towards something. I wish I had done this with both my businesses from the beginning. A lot of better decisions would have been made. I think this is great advice and I have passed this on to many of my own clients.

MO: What’s your favorite kind of project to work on? How do you help bring your client’s ideas to life?

Michael: It’s tough to pick just one but I really enjoy negotiating. Something about it really energizes me and I don’t ever get tired of it. I don’t see negotiating as adversarial like many of my counterparts in these situations. I approach it with a goal of making both sides feel good about the outcome and that is a challenge in and of itself. But if you can make that happen, your credibility improves immensely.

As far as bringing clients’ ideas to life, that comes in many forms for us. Whether it’s helping our clients take an idea from concept to market or immersing ourselves in management of a company to help business owners get to their vision, we try to create a feeling of partnership for us and our client in every project.