“Spend enough time on the questionnaire before you start programming: that’s the way to create effective and user-friendly surveys.” 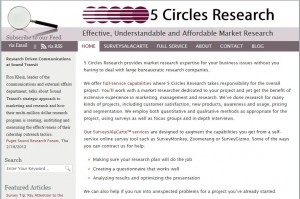 MO: What inspired you to start 5 Circles Research? Have you always had an entrepreneurial streak?

Mike: When Intel offered me the chance to move from England to the U.S., one of the things that attracted me was greater opportunity for individuals to start their own businesses. It was always in the back of my mind at Intel, but I was doing such rewarding work in a number of different areas (networking, modular embedded computers, real-time operating systems, development systems) that I didn’t think too much about leaving for a long time. I do remember one time saying in a team meeting that it would be fun to own a New Zealand fencing company; most of the team thought I was nuts, but one of my managers understood the desire to do my own thing. So when some of my buddies invited me to be co-founder of a new consulting company they were forming, I was ready. We evolved the company towards marketing and market research, and I ended up being the sole owner when the others went on to other things. I worked at a couple of market research companies to gain experience in a number of areas, but I loved running my own company, so returning to 5 Circles Research was ultimately a great idea.

MO: Do you think that most businesses could benefit from market research?

Mike: Most companies – yes, absolutely. And even some that are often considered as models of success without doing market research. Starbucks was long upheld as a company that wasn’t founded on market research; I think Howard Schultz said something like “how could we test whether people would pay a lot for a fancy cup of coffee?” But the coffee is only part of the point. Starbucks researched the idea of “the third place” – not the home and not the office – and that was the desire they addressed. Steve Jobs is famous for decrying market research because “customers don’t know what they want”. That’s true to a limited degree (and as others have pointed out it worked because of Steve’s intuition and enormous resources); we have to be careful when asking people about things they don’t understand. But we can almost always identify the pain points and the desires; these help to build an effective product. A new product generally benefits from prioritizing features and messages. Apple could have used market research to avoid some of the stumbles such as delivering without a burnable CD drive when the market needed it, or the huge price drop shortly after the first iPhone was introduced. But enough on Apple – the problem is that this kind of thinking is prevalent among the tech community. Too many think that what they can dream up and build will sell (echos of a better mousetrap), while not understanding that the target market isn’t necessarily like themselves.

Still on my soapbox – I’d like to mention customer satisfaction (part of market research in my opinion although some think it is separate). It’s amazing to me how many small and mid-sized companies don’t conduct customer satisfaction surveys. When the evidence of the connection to profitability is clear, I just don’t get it. Perhaps they don’t want to know what customers think, in case they’d have to fix something.

MO: What’s your favorite kind of project to work on?

Mike: Projects where the client understands the value of research, where our efforts can make a big difference, and where our insights are appreciated. Those tend to be new products, or acquisitions, where we are responsible for the whole project, but sometimes we are just helping the client do their own survey; that’s fine too – the DIY online survey tools are great, but our clients often need help with a questionnaire, sampling, or analysis. It’s fun to work on technology projects where my background is an asset, but we can provide actionable insights regardless of the industry. In fact bringing learnings from one industry to another is one of our strengths.

Projects that involve both qualitative and quantitative are probably my favorite overall. One of my most inspirational managers from Intel said that he thought market research was a great fit for me because of the ability to use both left and right brain thinking, and he’s right. Combining qualitative and quantitative is often the best way to meet the objectives of the project, and gets my juices flowing!

MO: You are known for pricing, using the Van Westendorp Price Sensitivity Meter. Can you explain to our readers what the meter is, how it works and the advantages of using it?

Mike: I’ll try to be brief, but for a more complete discussion see http://www.5circles.com/van-westendorp-pricing-the-price-sensitivity-meter/ . The Van Westendorp technique is the best direct pricing approach. Direct techniques assume that people have some understanding of what a product or service is worth, and therefore that it makes sense to ask explicitly about price. People know what they are prepared to pay, by and large, and if they understand enough about the product or service that’s being offered, they will give meaningful responses. We ask a series of four questions, worded something like this (and usually in this order):

• At what price would you think the XYZ would be a bargain?

• At what price would you think the XYZ would be getting expensive, but not too expensive to consider?

• At what price would you think the XYZ would be too expensive to consider?

• At what price would you think the XYZ would be so inexpensive that you would question the quality or that it would do what it says?

The last question about being too cheap is important. Van Westendorp is based on the principal that price relates to quality, at least to some extent, and that some things can be too cheap. VW is also suitable for regular goods, not luxury products that become more attractive as the price increases.

By contrast, indirect techniques, typically using conjoint or discrete choice analysis, combine the price with other attributes, ask questions about the total package, and then extract feelings about price from the results. Conjoint and discrete techniques are certainly robust and well-regarded, but they tend to need more complex design and analyses along with larger sample sizes (more expensive for the client). Equally important, my experience has been that even when my clients understand conjoint, they have difficulty in explaining the results internally.

We analyze results from Van Westendorp data graphically, typically filtering for the most interested. As market data is generally only one of a number of inputs into a pricing decision, the range of acceptable prices is the most valuable results. With the addition of demand questions we can also model volume and revenue. We’ve used the technique successfully for a wide range of products and services – from a special kind of beach towel to a new transportation service in India to online services – and we also find it helpful in focus groups and in-depth interviews.

MO: Most of us see QR codes daily. However, it seems that they don’t seem to be a particularly effective marketing tool so far. What do you think the problem with QR codes is and why aren’t they really catching on despite their prevalence? Do you think that the concept will evolve or just die out?

Mike: It’s hard to say what will happen. I’d been looking at QR codes for quite a while; I have one on my business card, and even put a code in presentations. I always thought they had promise. But when I read an article about lack of interest among college kids I was inspired to give QR codes some more thought. The problems are both technical and marketing/usage. Why don’t our phones come with QR code scanning already included? If someone who has never used a QR code sees something they want to find out about, they have to go through several steps to install software, do the scan (which may be quite slow for a complex code), and finally access the information through the browser. Only to find what? Generally something that makes the effort seem like a waste of time, and certainly most likely to be unconnected with the place the code was scanned. There are too many stupid things being done with QR codes right now, leading to the possibility of them fizzling out. A QR code in a TV show? On a car license plate? Microsoft’s incompatible TAG codes don’t help. Looking back from 2 years in the future, I wouldn’t bet on QR codes being regarded as successful. It seems likely that alternative technology will take over; let’s just hope that marketers wise up too.

MO: What are some tips for creating the most effective and user friendly surveys?

Mike: Wow, that’s a book. But a few thoughts:

• Plan with the end in mind. Don’t create a survey just for the sake of it, but to forward an objective. Examples are demonstrating the size of the market for investment, prioritizing features in the product, testing the price for your new service.

• Spend enough time working on the questionnaire before you start programming. It takes more time to create a good survey than you’d imagine, because you have to consider how a wide variety of people will interpret your questions. Making sure that questions are clearly worded, that options are exhaustive and exclusive, and that questions are really getting the desired information, is why questionnaire design is a combination of art and science.

• Make use of the survey tool to be respectful of the survey taker. Too many surveys don’t use the capabilities that are in the tool. The surveys often look like a paper questionnaire that just happens to be online. Use the logic so that only the correct people are shown a follow up question. Don’t make the survey taker do unnecessary work.

• Test, and test again. And when you think you are through testing, test some more. Along with enough effort in the questionnaire document and programming goes testing. It’s particularly critical when you run a fast survey online because you don’t have a second chance. First you’ll be testing among the team, and then hopefully among friends or associates who don’t know about the survey objectives. Ideally, you’ll also do a soft launch to a limited number of the real target. That way, if anything is wildly off you’ll be able to make corrections, and in the very worst case you’ll only lose a small number of responses.

• Don’t be afraid to seek outside help. Smart entrepreneurs know that sometimes it pays to use services from others. That doesn’t mean all or nothing; enlightened research vendors are willing to take on parts of a project to help clients who don’t want to hand over completely to a full-service vendor. That’s why we introduced SurveysAlaCarte™.

As you may have gathered by this interview, I have strong opinions. Check out Notes from an Idiosyncratic Researcher at http://www.5circles.com/if you’d like more.