“If you do what you love, you’ll never work a day in your life.” Corny, but true.”

Years and years ago, somewhere in the middle of 1985, Mike Smithwick got a great idea for a little astronomy program for his new Commodore Amiga 1000. He prototyped it first as a 22 line basic program, and then proceeded to spend the next two decades “polishing it up a little.”

It has won the hearts of many users, and he still gets email from time to time saying that Distant Suns was someone’s favorite program when they were in a) High School b) on their honeymoon, c) in prison. 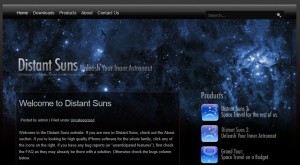 MO: First Light Design has only been around a few years now. However, it’s a business idea that you’ve been working on since 1985. What convinced you to finally take the plunge and launch the business you have been dreaming about for over 20 years?

Mike: The “business” aspect has only been a formality if nothing more, similar to say, that of a book author. I felt I needed more of a formal business, as Apple likes the App store authors to have a company name more than “JustMeAndMyKitchenTable.com”. So taking the next step and forming an LLC was just natural. Anything above that would be way overkill for essentially a one-man shop. However, I had been selling Distant Suns via a third-party publisher most of that time. The Appstore though, completely changed the rules, as there was no more need for someone to get packaging, the manual, CD-ROM duplication and so on. So now app authors are freed from that element and can go directly to the customer. It was funny to hear mumbled complaints from the new app guys about Apple socking it to them for a 30% cut. Oh, ye of little experience! Back in the “good ol’ days” when you’d buy software at a real store, the publisher would take not a 30% cut, but an 85% cut. Each Distant Suns sale now brings in more than what it did 15 years ago at four times the price and without having to have a warehouse full of boxes.

I also do some consulting on the side a couple of days a week to get me out of the house so my complexion doesn’t resemble that of an a) zombie, b) vampyre, or c) iPhone app nerd.

MO: Can you explain what some of your products do? Do you have a target audience?

Mike: The main product is Distant Suns. It reached end-of-life on the PC version about 4 years ago, as it didn’t play well with Vista. Not too long after that the iPhone came out followed by the SDK and that seemed a natural platform for the product as the iPhone-level devices were what I had wishing for back in the ‘80s. Simply put, it is a hand-held planetarium that could help identify what’s up in the sky on any particular evening.

The target audience is well, about everyone. Everyone, that is, who has ever looked up at the night sky and said “wow!” And if you’re not one of those people, my condolences.

MO: Where does your passion for astronomy come from and why is it meaningful for you to impart your knowledge (and hopefully love) for the subject onto others?

Mike: First there was my next-door neighbor in the 60’s who had a small home built telescope. He’d get tracking information on the various Apollo missions and we’d follow the spacecraft out to the moon, as they were visible due to the flashing of the sun-glints off of the flat panels on the lunar module. My neighbor would always have a cigar in his mouth, and to this day whenever I smell cigar smoke, I think back to the time when we actually knew how to send men to the moon and those warm California evenings.

Second, was the fact I was a planetarium nerd. Loved them and would always sit in the back row so I could “catch” the stars before the planetarium projector’s shutters would blank them out at the artificial horizon. And third, it was just cool.

Now days sometimes I’ll take my telescope out to the sidewalk near my condo, and invite the evening’s joggers for a peak at Saturn or the moon. And the “oh wow!”s I get are a lot of fun. Some will even call a friend on their cell phone and have them come over.

MO: What were some of the biggest challenges you faced when taking your Distant Suns software and transferring them on to a mobile platform?

Mike: Getting the touch interface just right. I am still working on that. Otherwise the development process went pretty smoothly, and the port from Windows to 1.0 was done with only about 3 man-months of work. The iOS toolkits are just that good.

Also, getting a handle on the marketing aspects of things. Back in those halcyon days-of-yore, in 2008, discovery on the Appstore was pretty easy and even the most simple of applications could score big. In fact, the week that Distant Suns was approved was the week the Appstore gained its 10,000th app. And I thought, “Gosh, how can I compete against 10,000 other titles??” But it went straight to Staff Favorites, and then later used as a demo in Apple’s brick-and-mortar stores, and featured several other times by Apple since then.

Then there’s the fact that marketplace changes or reinvents itself every 4 months or so. Either new marketing tools come on line, a breakthrough product storms to the front of the pack, or Apple declares something verboten that used to be okay. It’s really hard to get a good handle on things when they are just that slippery and amorphous.

MO: Last year you participated, via Skype, with an entrepreneurship seminar held in Ulan Bator, Mongolia. How did you get involved in the seminar and what kind of insight and advice were you able to pass on to the participants?

Mike: A dear friend of mine is starting a non-profit to, among other things, help teach business practices in third-world countries. So she paired up with another organization in Mongolia to help out in this seminar. I was one of their guest-speakers, and found out during the interview that three participants in the audience were already developing their own apps. I told them to make sure to develop software that they would use, and not try to second-guess the marketplace. That way, the application will likely be exactly what one would want, even if it doesn’t catch fire in the Appstore, and you’ll have a lot of fun and pride in developing it. Working on an application you just don’t have any interest in can become a real drudgery, and the quickest way to turn out a poor product. In addition to that, while it is good to check out what your competitors are doing from time to time, don’t become obsessed with them. Be your own toughest competitor; design the application you would most hate to compete against.

Then there is the aspect that Steve Jobs brought to Apple and their bloated suite of products upon the legendary second coming. There is the famous exchange with Mark Parker, CEO of Nike, who asked Jobs for advice. To summarize, his response was “Don’t build crap!”. So many companies these days will have huge product lines largely to see what works and what doesn’t but in the process, deliver all sorts of mixed messages as a result. For example, does RIM really need to introduce a new Blackberry phone every month, or Motorola with their Droid line? So for all of the good stuff they make, a lot will also fail. The people who buy the “crap” are likely not going to be future customers, nor will their friends who might ask them advice on what phone, shoe, or plasma ray gun to get.

I am sure this is one reason why Apple was so slow to get cut/copy/paste in iOS. They likely had multiple versions of it in test builds of 1.0, but it was not considered good enough to release. Finally when 3.0 came out, they had settled on a model that was both very elegant in its execution and a pleasure to use.

With Distant Suns, I’m starting to remove features that just were poorly executed, deciding to get them right before I reintroduce them.

And one further note of wisdom: If you work from your home, don’t buy ice cream, Twinkies, M&Ms or other delightful nuggets of sugar-laced products. Otherwise you’ll be raiding the fridge every 5 minutes and productively will go to hell. Trust me, I know what I’m talking about.

MO: What professional accomplishment are you most proud of so far?

Mike: Creation of a decent application that is paying its way, and having so much fun at the same time, that I would rarely think of it as “work.” The old slogan “if you do what you love, you’ll never work a day in your life” holds true here. 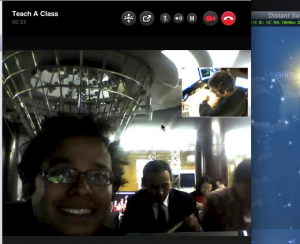