“I knew One Person could make a Difference. I just didn’t know it was Me.”

The Baby Boomer’s Guide to becoming an Overnight Success has been on my mind for three years, took 90 days to write and thirty years to experience. It is focused on Boomers to share their challenges and their successes and to demonstrate that their best years are not behind them. The book title is a bit misleading since this book is also about the Millennial Generation who have been able to create and grow a successful company in a much shorter time. These “Bookend Generations” have much to share with each other and by offering direction I believe we can create economic powerhouses throughout the country. The book is about success and about failures, but my tag line is: “You may lose confidence, but never lose HOPE.”

It’s not just for Boomers specifically, but really for anyone that has struggled for years and keeps getting defeated, yet keeps getting up until they win. A few years ago I thought I had finally “hit it big” as I believed I was able to put together a potentially lucrative partnership with a bank. Then the financial market exploded along with my dream. My entire 30 year career in real estate, financial services, mortgages and a weekly radio show all disintegrated within a few months and I had to figure out what I wanted to do with my life at the age of 54. The last three years have been part of that journey. 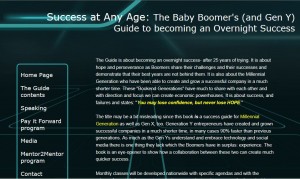 MO: What inspired you to write “The Baby Boomer’s Guide to becoming an Overnight Success?”

Norm: There are a number of answers to that. One was that I was disappointed in myself, yet never gave up and wondered how many others had that same experience. There really are few “overnight successes” but it takes years or even decades to get there. I have had a reputation many years of always falling down, yet getting back up and wanted to inspire others to do likewise. “Most live lives of quiet desperation” Thoreau wrote in “Walden” 150 years ago, and I did not wish to be one of them.

The catalyst was last fall as my stress level was off the chart. I was one day shy of losing my house to foreclosure, filed bankruptcy for the second time and felt my mortality and wondered if I was going to survive. Literally. If I died and never accomplished anything I would be unfilled, so wanted to leave some type of legacy and maybe help others and myself at the same time.

My Mother is a Holocaust survivor and was in Auschwitz for three years. She went through so much more than I ever did or could, so how could I give up? I would be dishonoring her. The book is dedicated to her because she never lost faith in me even though I lost faith in myself many times.

MO: Can you give us a summary of the book and explain why you specifically focus on the Baby Boomer generation?

Norm: Because I am a Boomer and see millions struggle to find themselves. I am highly unemployable and have always been an entrepreneur. There are millions more like me that have had to reinvent themselves over the past three years and many (former) employees that are now looking to create a business. My initial thought was to interview those from Phases one, two and three, each corresponding with the phases of life and business. The Boomers are in Phase Three and have their own motivations, whereas the Gen X and Gen Y are motivated differently and have varied experiences.

The book took a new direction as I interviewed over two dozen people nationwide along with many Millennials, those under thirty. These innovators have created successful businesses in a much shorter time that Boomers have- under two years- yet they lack the one thing Boomers have in spades: experience. These “Bookend Generations” have much to offer each other and that is what the Guide does. It’s a roadmap to a Two-Year Success Plan which mandates Action Steps, not just wishful thinking.

From the book I will be doing many speaking engagements and setting up nationwide classes to bring the Boomers and the Gen Ys together, called mentor2mentorship classes.

MO: Was this your first writing project? What did your creative process look like while writing the book? Is there another book anywhere on the horizon?

Norm: I have written many articles over the past 20 years on the various businesses I was involved with, whether it was real estate, mortgages, financial services or radio. I was an innovator in the early two-thousands of very unique cash flow strategies to help homeowners pay off their mortgages in less than ten years. I wrote the workbook, but it was not a book, per se.

In the last year I have been writing for the AOL owned PATCH network and share business articles for three different cities. The drive and the desire was there, but I didn’t know if I had enough words in me to write a book. As I started this process I asked myself “How many words are inside of me?” and as I hit 50 pages the comfort level was better, even more so at 100 pages and by the time I wrapped up with about 50,000 words, about 150 pages it was a firehouse I could not stop!

In the back of my book I dedicate one page to a saying that I originated and at live workshops everyone will get a copy: “I knew One Person could make a Difference. I just didn’t know it was Me.”

I am not religious, but I am spiritual and I just opened myself up to some type of subconscious thought and this book has been a catalyst for an amazing internal conversation and the most optimistic- and REALIST- thoughts I have had in many years. The people I interviewed have been inspiring and I have a sequel planned along with two other books in a similar vein.

This book changed my life and that is not drama, but reality. I have had thoughts of suicide and have known other that have done it. I needed to remove that Bad Thought forever and do the same for others. I am dedicating the rest of my life to inspiring and supporting the business community which is something I have tried to do for three years, but was not successful. The Boomers may think their time has come- and gone- but I do not believe it to be true. They were just taking a break and are ready for a Reboot. A percentage of the book sales from Day One will be going to charity and I have created a unique “pay if forward” affiliate program for anyone that wishes to share my book and do likewise.

MO: Have you had any mentors during the course of your career?

Norm: Sadly not until just a few years ago and that was one of my biggest failings. In my younger years I had unbridles enthusiasm and optimism, but not much business savvy. If I had someone to reel me in and keep me focus my path would have been much different. Three years ago as I WAS looking for direction I met a man that has become my mentor and much of my growth over the last three years I attribute to him.

So the end game of the book is not the book, but nationwide mentorship centers and incubators.

MO: What is one mistake you’ve made that our readers can learn from?

Norm: OMG, just one?? I think the lack of a mentor and the lack of focus are on equal footing. But here’s the good news. The world TODAY has as level a playing field as we have eve seen in our lives. ANYONE can compete with the “Big Boys” and by embracing technology and social media power ANYONE can create that successful business in two years.

MO: What can we expect next from Norm Bour?

Norm: More of my life is behind me than in front, so I want to make a difference- a real difference- from now on. I see myself inspiring many that have given up hope and if I can help some of of them, then that is a legacy my Mother would be proud of.