“I had to travel down the rabbit hole to see the world in a “whole” new light.”

Phil invented ‘The Sphere’ a patented online technology and methodology that features a simple-to-understand, standardized, universal, visual model that reveals the interconnected whole of any complex system. 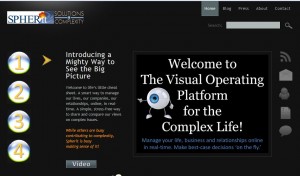 MO: You designed and deployed four advanced online applications and held titles like COO and EVP at well respected companies. Then after many professional successes, dropped out of the corporate scene and moved to a mountain cabin to research the drastic changes occurring in the business world. What prompted the move and how did you go about your research?

Phil: There were two factors that came together. First, my own experiences consulting with and/or running companies during the chaotic personal computer revolution and introduction of the Web. I realized that few people understood the significance, or the extent, of the sudden changes happening in the business world in the mid-80s to early 90s. They couldn’t comprehend them. It didn’t matter if I was consulting at the board level of a billion dollar company or a small mom-and-pop — it didn’t matter if I was working in the U.S. or Europe.

People were largely waiting for things to get ‘back to normal’ so they could continue with business as usual. Because of my eclectic background, I sensed the changes occurring were irreversible. I felt we were in the midst of an unprecedented transition — that we were being forced to leave behind outdated business models — mechanistic and hierarchal practices — virtually overnight. But I couldn’t easily explain how or why I knew this. I attempted to write about it while still living in Los Angeles, in 1993, but the message was incomplete. Then, life got in the way, requiring moves and different job pursuits. Finally, in the late 1990s, when the company I was working for was sold, and the so-called internet bubble was in trouble, I knew it was time to stop, drop out, and finish that book. It was time to travel down the rabbit hole and see the world in a “whole” new light.

I thought it would take about a year to write it. But it took five years. It required a depth of research that my co-author, Rob, and I, had not anticipated. Research into the history of our modern-day mindset; into how technology has upturned the way we functioned as a society; and research into the advancements, over the last 100 years, of systems science — an entire suite of disciplines that include complexity science, interconnectivity, turbulence, emergence and self-organization, which proved to be a real mind-bender.

MO: How did 10 years in a ministry influence your perspective in both life and work? How transferable were the skills you learned working on social change activities to the business world?

Phil: That influence was profound in unexpected ways. During our ministry work, in the 70s and early 80s, my wife and I made an unanticipated discovery while serving poverty-stricken areas, working alongside people who had suffered cruelty, who had been deprived, marginalized or experienced hopelessness. When we helped those people connect-the-dots in life — to no longer view their experiences in isolation — it often woke them up, it energized them to rise to the challenges they faced. We did this at a time when our counterparts believed in teaching and enforcing standardized rules, disregarding personal circumstance, thinking it served the greater good.

When we entered the workforce fulltime, at the start of the personal computer revolution, we discovered that business leaders had a similar attitude about their employees: ‘do as you’re told — ask no questions, make no suggestions.’ Workers were mostly parts in a machine and had been taught to function that way for a long, long time.

But I had not been indoctrinated in that business model. I didn’t have a business degree. And as I quickly rose through the ranks of the company I worked for — working my way from the bottom up to president — I behaved differently than standard leaders. I embraced the changes being forced upon us, even establishing that company as a beta test center for new technologies related to customer needs. And, I tapped into the individual gifts of each employee, even hiring unconventional people who did not fit the mold for certain jobs. They weren’t parts in a machine to me. I knew they could be inspired if I unlocked their potential. I encouraged them to flex, adapt and learn quickly in a rapidly changing industry. While that was an exhausting approach, and unusual to the times, our company grew and thrived when many other competitors, who had been in business much longer, couldn’t keep up and closed their doors.

MO: Can you explain what The Sphere is and how it works?

Phil: The Sphere is a patented online technology that is customizable for unlimited applications. It is a simple visual that displays essential details of complex topics on a single page—in a circle. The Sphere allows people to quickly see how each detail relates to others, in context. It teaches users to seek the whole picture, which automatically reduces bias and opinion.

Users simply rate a set of questions online, clicking a number from 1 to 9, crafted by specialists in a given field (marriage, education, leadership, etc), and the answers are displayed in real-time. They can then share and compare their answers with their partners, fellow workers or fellow citizens. Participants can remain anonymous.

The Sphere has helped save marriages; it has helped executives avoid making bad decisions; it has put managers and employees on the same page—in minutes; it has helped human resource departments streamline their hiring process; it has helped disadvantaged high school students make better informed decisions about college. It has allowed citizens on different ends of the political spectrum to engage in civil dialogue.

MO: How do you create a model for making sense out of complexity and make it mainstream? What were the biggest challenges in this immense undertaking?

Phil: The underlying methodology of The Sphere is meant to reflect advancements in systems science, computer science, the science of visualization and neuroscience. And the design of it is meant to compliment the limits of our working memory. It’s a proven scientific fact that we can only juggle about 7 things at a time before we hit overload and start dropping balls.

But here’s what I did to make it mainstream: It was important to make it simple and practical for people who are just trying to do their best at managing their complex lives. Once they understand the system, they can use it over and over again for different purposes. The very activity of determining all relevant questions on a sphere, related to a topic or field, and then rating their views of it, impresses upon end-users the necessity of connecting-the-dots in everything they do.

One of the biggest challenges I faced early on regarding The Sphere involved people’s mindset. Many are so used to breaking their activities into step-by-step, linear, assembly line processes, that it seemed at first impossible for them to grasp that they could learn so much, so quickly, looking at a single sphere chart. Another, involved people presuming The Sphere was a survey or assessment. But it is neither of those. And third, people think they already look at the whole picture when they make their decisions. They think the concept is a natural one. But when I ask groups of professionals in a room to identify what constitutes a whole person, for instance, or the whole of their company or their health, they rarely give the same answers. That’s because it’s not an activity we’ve been trained to do.

MO: What have been the practical applications of The Sphere so far?

Phil: It has been used by the US Army, government agencies, colleges/universities, corporations and NGO’s, advisers, counselors and management consultants.

MO: What professional or life accomplishment are you most proud of?

Phil: My diverse life experiences, combined with my exploration of systems science, have made it possible for me to create a technology and methodology that I believe can truly help people navigate our increasingly complex environments. It’s a ‘next generation’ social media application. I’m excited about the opportunities ahead. I like to say, ‘I’m taking the world from a line to a circle.’ The machine as metaphor has passed. The Sphere is here.