“We gained market share quickly by following the basics: good product, attention to support, building relations with retailers and channel partners, and investing in marketing.”

TP-LINK is a global provider of networking products and the world’s number one market share leader in wireless LAN and Broadband CPE devices, with products available in over 120 countries to tens of millions of customers. 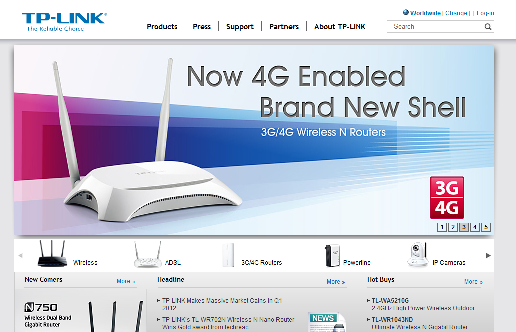 MO: Can you talk about how you’ve grown TP-LINK to be the global leader of networking products with millions of customers since launching in the mid-1990s? And how has TP-LINK USA risen from an unknown brand to one that’s heavily covered in the span of only two and a half years?

Richard: TP-LINK was founded on a simple idea. We wanted to provide reliable wireless networking products at extremely affordable prices. It’s an idea that has resonated with customers worldwide. It’s also a strategy that does well in good times and bad. The key factor of wireless networking products is reliability. If a wireless router fails, the entire network is inaccessible whether we’re talking about homes or businesses. The US is the most competitive market for consumer and business technology products, but even so we have gained significant market share, and mindshare, in the last two and a half years. We did this by following the basics: good product, attention to support, building relations with retailers and channel partners and investing in marketing.

MO: A large proportion of our audience has built their businesses with a small amount of resources. What common aspects of the entrepreneurial process can you draw similarities from between being bootstrapped and having the support and resources of a big company?

Richard: I’ve been fortunate in the sense that TP-LINK USA was established very much like a start-up, but with the backing of a global company’s R&D. That being said, we had to open our very first office for the US in Los Angeles and staff it from the ground up. At that time, the challenges of penetrating the US market seemed daunting, but we built a strong team of employees with quite a bit of experience in the wireless networking industry. We were also given the latitude to experiment with new marketing strategies and adjust on the fly, similar to most entrepreneurial companies. These include testing Facebook contests, live event Twitter contests and an “Inner Council” of trusted advisors comprised of customers.

MO: What are some ways that you’re continually finding ways to deliver high quality wireless networking products at prices that are lower than your competitors?

Richard: Our ability to provide more cost-effective networking products is based on an intricate research and development and manufacturing strategy that utilizes every aspect of the product development process to drive down costs while improving quality.

We invest 8% of annual revenues into R&D, which improves our products’ quality, thereby giving consumers confidence in the TP-LINK brand, while simultaneously driving down RMA rates – which stand at less than 1% – which also saves on the cost of shipment and technical support issues.

At the same time, since we own our own manufacturing process, we are able to keep our cost of products as low as possible due to the strengths in our supply chain. This type of vertical integration isn’t seen in even our largest competitors who outsource manufacturing to third party contractors. The positive cycle of economies of scale further contributes to our ability to keep costs low.

As I mentioned earlier, reliability is everything for wireless networks. It doesn’t matter how attractive the packaging is. And while a stylish router is always appreciated, in the end it’s just a box taking up space if it doesn’t fulfill its primary function of effectively transmit wireless signal. Without a good, solid wireless router and adapters, much of what we now take for granted goes away: surfing the Web, answering emails, engaging on social media, streaming music, watching videos and movies, gaming.

To that end, we put reliability right into our company slogan: “The Reliable Choice”. Our R&D is focused on ways to improve product reliability and areas such as signal strength, data throughput and stable connections. TP-LINK’s products center around more mature technologies that have shown to be accepted by the market, reducing the risk around our new product launches and giving us the leeway to sacrifice gross margin in return for anticipated volume.

Richard: Establishing TP-LINK USA was quite a bold move for the company given the competitive landscape. I was appointed to establish a beachhead in the US market in the midst of one of the most severe economic downturns in many generations. Given that most Chinese companies usually are more focused on engineering rather than marketing, it was encouraging that we had the resources to invest in sufficient marketing, branding, public relations and sales personnel. As for how it’s turning out, there’s still much to be done but the early reception from customers, bloggers, tech editors and channel partners is very encouraging.

Richard: Two examples come to mind, actually. A year ago we announced the TP-LINK Support Force comprised of technical support engineers who would actively scour the Internet for TP-LINK users who had questions. In real-time, the TP-LINK Support Force would attempt to contact and troubleshoot these users who were posting on message boards, forums and commenting on blogs. Users were pleasantly surprised that we were proactively monitoring and responding to inquiries throughout the Internet. This is an example of how marketing and customer support can work hand in hand.

On the social media front, we found that tying in social media with live events resulted in a large number of increases in Fans and Followers for our Facebook and Twitter pages. Even better, engagement of Fans continued strong many days after the events concluded. We encouraged attendees of shows such as gdgt Los Angeles to Like our Facebook page, retweet Twitter posts and even wear TP-LINK t-shirts at the event for a chance to win prizes. Social media is all about building a community, and live events is a natural extension of that.

MO: Can you talk about launching the next generation of high speed wireless routers and what that means for the company?

Richard: The next generation of high speed wireless routers is based around an upcoming standard known as “AC”. The current most popular standard is “N”, with past ones including “G”, “B” and “A”. All these standards mean is faster speeds and greater range. The new 802.11ac routers have yet to be ratified by the IEEE, which is the governing body. We expect TP-LINK 802.11ac wireless routers to be available toward the end of the year and available for viewing at the 2013 Consumer Electronics Show in Las Vegas. 802.11ac operates on the 5GHz band so it won’t conflict with common devices on the congested 2.4GHz band such as other wireless routers or even cordless phones. Speeds will reach a theoretical 1.3GHz, a significant improvement over current 802.11n technology, which will allow for the use of an impressive array of applications between numerous network connected clients. TP-LINK’s 802.11ac devices will make truly digital homes and offices, integrating all work and entertainment tasks through the network, not just possible, but affordable as well.