“The indie publishing world is growing rapidly, with no limit in sight.”

Robert T. Jeschonek is an award-winning writer whose fiction, essays, articles, comic books, and podcasts have been published around the world. He writes fiction in a wide range of genres, including fantasy, humor, literary, mystery, science fiction, and super-heroes. His work is intended for adult readers and young readers alike.

His company, Pie Press, publishes e-books, paperbacks, and related merchandise for the growing domestic and international market. Pie Press offers 70 titles featuring everything from fantasy and horror to mystery, romance, and thrillers. 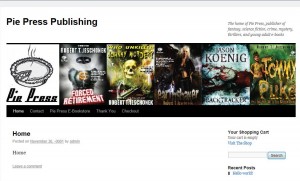 MO: What influenced your decision to found Pie Press Publishing? Why did you want to explore other areas within the writing industry after reaching such acclaim?

Robert: The success of the Kindle and other e-reading devices opened up a brave new world for independent publishers. I soon realized that this promising new distribution system was in its infancy, and the growth potential was enormous. As a writer, I saw this as an exciting new way to connect with readers and tap a revenue stream that would supplement my sales to traditional publishers. So I launched my own small press to test the waters, starting with a handful of e-book titles in early 2010. Since then, the Pie Press list has grown to 70 titles, a mix of short stories, novellas, novels, collected editions, and non-fiction across a wide range of genres. Some of the titles feature material that has appeared elsewhere, while others feature previously unpublished work. I continue to maintain an aggressive release schedule, putting out a new title weekly or bi-weekly, and this has helped build reader interest and increase revenue. What started two years ago as a trickle of income has turned into steady monthly earnings…and it shows no sign of slowing down. Domestic e-book sales continue to rise, and the vast international market has barely been tapped. The indie publishing world is growing rapidly, with no limit in sight.

MO: When did you first realize that you wanted to pursue a career as a writer? Who were your early writing influences?

Robert: I wanted to be a writer from a very early age. When I was six, I won a first place author award in my first grade class. After that, I wrote and self-published my own magazines on notebook paper, and the writing bug never left me. Science fiction writers like Isaac Asimov, Ray Bradbury, and Frank Herbert had a strong influence on my work in high school. In college, I turned to John Irving, Kurt Vonnegut, and the Beats, especially Jack Kerouac. Years later, I broke through by winning the grand prize in a nationwide contest sponsored by Pocket Books. That led me to an amazing workshop on the Oregon coast which put me on track to succeed as a professional writer.

MO: How has your experience and success as a writer contributed to the development and success of Pie Press Publishing?

Robert: Writing for so many years, and working with professional publishers, gave me insight into the process of developing a book line. I knew what it took to create a book, from writing and editing to creating an effective cover and generating powerful blurbs. Years of writing gave me an extensive back catalogue of material to use as the backbone of the Pie Press list. Just as importantly, I had realistic expectations of the timeline I faced in this field, which has a very long tail indeed. I knew that it could take quite a while for revenue to exceed my investment, but laying the groundwork properly would ensure future growth. The new publishing models give books a much longer shelf life–an indefinite one, actually. Traditional publishing tends to favor immediate returns, followed by quick abandonment of underperforming titles. But indie publishing demonstrates that lower initial sales are not indicative of a book’s lifetime potential. Lower sales over a longer term with a higher royalty per book can turn an average title into a steady lifelong moneymaker.

MO: You publish both paperback books and e-books. How different is the process of physically publishing a book to getting it published on-line as an e-book? Why did you decide to include both aspects of publishing within your business model?

Robert: I decided to publish both paperbacks and e-books because I wanted to take advantage of the unique opportunities each provides for reaching an audience. E-books are really taking off, and they’re relatively easy and inexpensive to produce, so of course I focused on them. At the same time, e-reading is still in its infancy, with the majority of readers favoring paper books. If Pie Press neglected those readers, it would mean overlooking a significant segment of the publishing market. So I’ve made it a point to include both e-books and paperbacks, and the current generation of publishing tools has eased the way. In the past, publishing a paperback was a difficult and expensive proposition. The publisher had to create all the elements in physical form, not as electronic files, then pay to print the finished books and maintain them as inventory available for sale. Today, publishing a paperback is almost as easy and inexpensive as publishing an e-book. Print-on-demand sites such as CreateSpace enable you to generate an electronic file of your book, properly covered and trimmed, then make it available for sale without the need to keep it in inventory. Whenever a customer orders a copy, CreateSpace prints and ships it, then keeps a percentage of the sale price and gives the publisher the rest. Costs are so low, there’s no good reason not to make your titles available simultaneously as paperbacks and e-books.

MO: Can you tell our readers a bit about the new weekly serial you’ve recently started to publish?

Robert: Pie Press is always looking for ways to experiment with narrative and access readership. We decided to run a weekly e-book serial that hearkens back to the serialization model favored by writers like Charles Dickens and Sir Arthur Conan Doyle. This new series, HEAVEN BENT, is a thriller in the mode of TV series like LOST , ALIAS, and ALCATRAZ. The plot is loaded with mysteries that we will explore throughout the 12 chapters. Each chapter reveals a little more and ends with a high-stakes cliffhanger. As for the story itself, it follows a movie star who dies in an accident and goes to Heaven…but Heaven is stranger and more violent than he ever expected. Wild and impossible things happen, leading him to join forces with a ragtag group of rebels standing up to the higher powers-that-be. Exposing Heaven’s secrets turns out to be more dangerous than anything the dead movie star did while he was alive.

I’ve been having a great time writing this series and plan to do more such projects on a weekly, bi-weekly, or monthly basis. I think this model has strong potential for reaching a large audience in the e-book age. In addition to generating sales of the serialized title itself, this kind of regularly scheduled release can fuel interest in a publisher’s other titles, helping to build sales across the list.

MO: How are you managing to continue the rapid expansion of your line, while maintaining high quality output?

Robert: Pie Press publishes a new title every week across a range of genres and age groups, ensuring a broad and diverse base for the company. But speed isn’t everything; if the quality isn’t consistent, readers will turn away. So I work with an editor to review all content in terms of both writing quality and grammar. We also conduct periodic reviews of published material, spot-checking for errors. As soon as we spot a mistake, we correct it across all editions and replace the imperfect versions with the corrected ones. As for graphics and illustrations, I work with an artist who provides high quality images generated specifically for each new title. Instead of using generic public domain artwork that doesn’t fit a title, our artist creates visually appealing covers and interior drawings that add significant value, helping to tell the story and enhance the reader’s enjoyment.