“How to Respond to Stubborn People.”

Dr. Roger Frame, President of Frameworks 4 Learning, provides consultation and training on interpersonal conflict resolution, defusing power struggles, and leadership development. He has presented over 230 workshops across the United States with excellent reviews. Dr. Frame is also a member of Profit Hunters, a business consortium of experts providing everything you need to run a business. These consultants provide staff recruitment, selection, assessment, and background screening. They can provide organizational assessments, and consultation on compensation, goal setting, and performance management. In addition to live consultation and training, they also provide on-line formats, audio tapes. 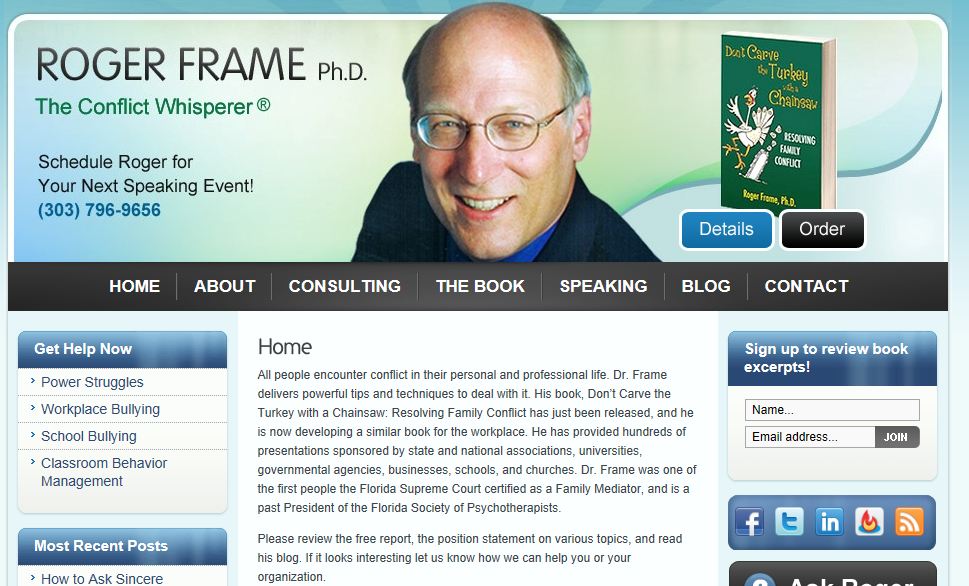 MO: Where does your passion for resolving conflict come from?

Roger: I have been involved in conflict resolution for a long time. When I first obtained my Ph.D. I directed a 37 county child abuse treatment and prevention program through Southern Illinois University. I soon became aware that families do not become abusive because they are bad people. Rather they became abusive because they were highly stressed and didn’t know of better ways to handle the situation. When we provided training and support, 93% of those families had no subsequent reported abuse. When my son became a teenager, I needed more techniques to cope. I found that these same methods worked well in all my relationships including business.

MO: When it comes to conflict and power struggles, are the rules or approaches for resolution different depending on the setting? Would the process of conflict resolution be different at home, work or school?

Roger: Using one conflict resolution strategy across all situations is no more appropriate than wearing one set of clothing in all situations. Just as you wouldn’t wear a bikini to the prom, or a wedding dress to work in the garden, you must be flexible and modify your conflict resolution strategy to the situation. People tend to be more cooperative at home and more competitive at work. However similar situations will require similar responses regardless of whether they are at work, home or school.

MO: No matter what industry you work in there are always difficult people, either as colleagues or customers. What are some tools and advice for dealing with challenging individuals and the conflict it can create?

Roger: Difficult people generally do not believe that they are being difficult. Rather, they believe that others have not fully understood their position. The disagreements are not generally about the facts, but rather the interpretation of the facts. Therefore, begin the discussion by presenting your facts. Then ask for their interpretation of the facts. Fully hear them out and ask sincere questions about their interpretation. Refrain from interrogating or accusing. When they feel heard, they will be more willing to listen to you. Then, present your interpretations and give reasons why you feel that way. Try to provide a way for them to save face if they must change their position.

MO: What inspired you to write, “Don’t Carve the Turkey with a Chainsaw: Resolving Family Conflict?” What did your creative process look like while you were writing?

Roger: I had directed a child abuse and neglect program, and was one of the first to be certified as a Family Mediator by the Florida Supreme Court. But when my son reached the teen years I encountered new conflict challenges. I thought I’d spend a few weeks getting some new ideas, and ended up researching the topic for a year. I had found that conflict successfully resolved brings us closer together. But unresolved conflict percolates and gets stronger and stronger until we can’t taste anything else. I wrote Don’t Carve the Turkey with a Chainsaw to share some of what I had learned in a way that was easy to read and sometimes humorous. One reviewer compared the book favorably to Steven Covey’s book, The Seven Habits of Effective People.

MO: Why do power struggles increase during the teen years? Can you provide parents who are navigating hard times with their teenagers with some practical advice for coping?

Roger: While we tend to view teenagers as more emotional than adults, the real culprit is not excess emotionality, but rather their less developed ability to regulate emotions. It is not just hormones kicking in, although that is a factor. At a time when risk taking and stimulation seeking are rapidly increasing, the teen’s ability to pay attention, set priorities, consider consequences, and inhibit impulses normally develops more slowly and is only complete in the mid twenties. It’s not an accident that many car rental companies won’t rent cars to people under age 25, and insurance rate drop when boys turn 25. At the same time the brain synapses that connect the brain cells are being pruned. Connections that were there are now gone, and other neurological changes are occurring that makes the brain more efficient. This all means that their emotional development is not just a nice smooth progression into rationality. So what do we do about it?

First of all, realize that this is normal behavior and this too will pass. Don’t over-react. Find ways to refuse to take their obnoxious, irritating, or threatening behavior personally while you stay personally involved with them. It may help to visualize that you are a fish and they are throwing you the bait. Teenagers are expert at knowing exactly what comments or actions will hook their parents. Will you bite and end up sizzling in the frying pan?

Another tactic is to provide choices. Teens seek power, and providing choices that you are willing to accept gives them power. For example, instead of telling your son to mow the lawn right now, ask him when he can mow the lawn before Sunday. Providing choices also works well in business.

MO: What’s the most exciting thing on the horizon for you personally or professionally?

Roger: At the end of April 2012, I will meet many of the top TV, radio and Magazine producers in New York City. Hopefully you will soon see my shining face on network TV and radio.