“With perseverance, and dedication it is possible for anybody to found a successful business.”

Sean Gray immigrated to the U.S when he was just 17 years old. When he first arrived he was living with his brother and they literally had nothing. In order to survive, they started buying and selling cars. This is how the basis of his business was formed.

Cash For Trucks main purpose is to make the car selling process extremely easy. Cash For Trucks purchases cars from private parties, making it possible to sell a car in 24 hours. 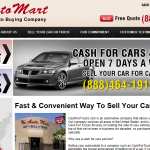 MO: Your story is so inspiring. Do you feel that the success of Cash For Trucks embodies ‘The American Dream?’

MO: How does Cash for Trucks work? How have you managed to streamline an often complicated process?

Sean: Cash For Trucks operates as an auto buying company. We purchase cars from private parties, making the car selling process easy. Selling your car can literally be handled in a single phone call.

Yes, we have definitely managed to streamline a complicated process. It is pretty common for people to struggle with selling cars, of course sites like craigslist have made it a bit easier. Although, these sites also bring forth other problems, and people have to worry about who they are dealing with.

Our company has become a place that can be trusted, where people know they are dealing with a licensed company. Additionally our company aims to eliminate the time spent selling a car, such as the tedious phone calls and no shows.

MO: Can you tell us a bit about the national campaign that you’ll be launching soon and the development process behind it?

Sean: The national campaign we are starting is something we are really excited about. Essentially we are collaborating with a fortune 500 company, that is one of the biggest auctions in the U.S, Canada, and also Europe. They are opening our doors into other geographic areas, and allowing us to reach more clientele.

MO: If someone told you 15 years ago, that the business you started with your brother would achieve such remarkable success, would you have believed them?

Sean: Honestly in my younger years I would have never believed that this was possible. When I came to America it was humbling, and to tell you the truth I wasn’t even sure I was going to make it out here. I would have been ecstatic if someone told me I was going to own and operate my own business. To think that I would start a nationwide company, would have been unheard of. Which just goes to show you, that literally anyone can succeed and your problems will only make you stronger.

MO: How has Cash For Trucks evolved since you first started out way back in 1998?

Sean: It has changed immensely since it originated. Originally we had only two auto buyers, being my brother and I. Since then we have prospered, and now have several tow companies working with us.

Additionally we now advertise heavily, which was not an option in the beginning. We have a strong online presence now. Furthermore, we now purchase all types of vehicles, and are willing to take more risks.

MO: What personal or professional accomplishment are you most proud of so far?

Sean: My Family is definitely my greatest accomplishment in life, I have three kids in which I cherish. Apart from that obtaining my first location is what I’m most proud of. It was a definitely a risky move, and I had a very difficult time making the payments. Although, it was at that point that I realized I could make it. If I’d have to leave you with one word of advice it is to act on your thoughts, and you have to take risks sometimes. I could have, and almost did second guess myself when obtaining my first property. If I hadn’t purchased that location it would have changed my life completely.