“I thought it was only natural to counsel my clients in business law.”

The Law Offices of Senen Garcia helps both small businesses and large corporations with many of their legal needs. They specialize in helping companies incorporate in Florida along with other states and then they help them to build a sound legal strategy for their business. Unlike many business lawyers in Miami, they take a personal approach with each and every one of their clients. From drafting employment agreements to commercial litigation, their firm is committed to assisting you with any legal issue you may have. 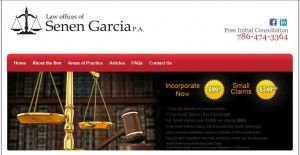 MO: What initially attracted you to practicing law?

Senen: It is actually an interesting story. My original interest started in high school. At the time, I was undecided between business, physics, and law. Ultimately, I decided against law because I was not up to the idea of writing and reading a great deal. However, the choice to eventually pursue law happened after I graduated from college. I had started a business while I was in college and decided to expand it after I graduated. It was there I decided, with my partner, to bring in more personnel. One of the individuals we interviewed was a man who claimed to be a great salesman and alleged credentials to back it up. From what he said and provided, we decided to bring this person in. Unfortunately, he turned out to be more of a con artist. He took advantage of us and depleted all of our resources. Following the actions of this person, I decided I never wanted to let what happened to me happen to others. That was when I made the choice to enter law school.

MO: What influenced your decision to concentrate on business law?

Senen: Well, the final choice I made in high school was to pursue a business degree in college. However, before high school, I was familiar with running businesses from opening my first business when I was 12 to watching my family with their different businesses. In fact, when I was forming the corporation for the business I had in college I began doing research to see what was best and it was in researching the corporate structure I developed a fascination with corporate formation. Therefore, considering my background and the schooling, I thought it was only natural to counsel my clients in business law. Of course, while in law school, I became even more interested in the subject crystalizing my direction.

MO: Can you provide some tips for advice for small businesses in making sure their businesses are formed properly and have the necessary documentation?

Senen: Absolutely. For starters each business is different so there is no form structure that fits all as some might lead people to think. The first step is confirming who will be involved in the company to be formed and in what capacity each will be involved. If there will be more than one owner, additional protection and documentation must be included to make sure everyone is protected such as a shareholder’s agreement. Now, I know many entrepreneurs are on a tight budget and, in order to save money, forgo certain aspects of the organizational process to save costs such as limiting the use of an attorney. The justification for this decision is based on a perceived trust among their fellow partners. However, considering the fights and breakdown among the people I have seen from best friends to family members, this “cost saving approach” may end up costing a great deal more than what was saved later down the road.

MO: Are there any misconceptions about lawyers that you’d like to clear up?

Senen: First off, not all attorneys are bad but there are some. Regardless of the impression, attorneys can provide a wealth of knowledge that can really cut down time in getting things done. Though one issue I would like to clear up is why their fees are what they are. Lawyers spend a great deal of time studying and researching the law. As a result, they can provide knowledge a lay person may not readily possess. It is for this reason attorneys are in important part of any business and why their fees are what they are.

MO: How important is good chemistry with your colleagues?

Senen: Good chemistry is extremely important. In both my offices, there is great chemistry among all the personnel. In fact, when interviewing applicants for positions, I conduct an interview along with others in my staff. Reason being, everyone in the office will need to interact. Therefore, everyone will need to be comfortable dealing with this new person.

MO: Can you talk about how you’ve been interested in entrepreneurism from an early age? Who or what were your early influences to encourage you down the path less travelled?

Senen: Well, the reason was my family. My family is full of entrepreneurs from auto mechanic shops to construction companies to medical practices. I guess you can say their ambitions rubbed off on me and gave me the spark to start down that road. After having the taste of entrepreneurship, I never wanted to head back in the other direction. So, I guess you could say my family influenced me to start on the path to entrepreneurship and the path itself influenced me to stay on it.