“…and I’m sure some of that has to do with the fact that neither sex know what they actually want or what makes them happy!”

Shelli Trung is passionate about giving the younger generation and particularly women – a voice and presence in entrepreneurship, education and social issues that have a direct impact on the quality of their lives. Shelli is also passionate about assisting social enterprises, particularly those that have a direct impact on improving the lives of refugees or displaced persons as she started in Australia on a refugee status.

She is the founder of 3six5dates – a reality dating blog that follow four women in four international cities as they take on 365 dates between them. To learn more about their adventures and misadventures @ http://www.3six5dates.com/ 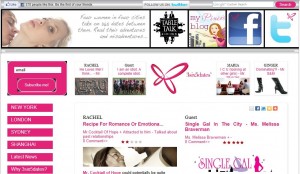 MO: First of all, how did you come up with the idea of 3six5dates? What was your starting point for the project?

Shelli: I had myself a goal that by the age of 30, I would start my own business so leading up to this, I spent a bit of time looking at the different types of businesses that were out there. I settled on starting an online business as I did not want to deal with the issues of handling physical stock. When the TV series, “Sex and the City” finished up, I felt that this left a huge gap in terms of giving women a voice. So, I looked at ways that women could still tell their stories. I also chose to make it international – selecting four international cities, as I’ve always liked looking at culture differences. From there I moved onto testing the market viability of the project.

MO: How have you managed to build and manage a team of 10 volunteers, across four time zones without having met most of them?

Shelli: This was something that came about accidentally. In my initial stages when I was looking for the four women to take on the dating social experiment, I had a large response from all over the world, enthusiastically volunteering to take it on. As I had placed a strict age criteria, a few women who did not meet this actually volunteered to help in other ways such as editing and marketing – those who were already working professionally!

From there, I decided to bring on board more team members in order to have ‘on the ground’ staff in different regions. At one stage, we were a team of 30 all virtually connected via Skype, Dropbox and emails. We are now a smaller but more focused team as we have been able to systemise a lot of our work – which is were my expertise is.

MO: What are some of the rules or guidelines of the game?

Shelli: One of the things I wanted to define early on was what counted and did not count as a date for 3six5dates. Surely a 10 min dash would not get a tick in the box, nor should any one be subjected to 4 hrs of tortured silence if there was no chemistry.

So, we set a few ground rules including that it must be at least one hour long and considering 92 dates for each woman was quite a few, I allowed the women flexibility in terms of how they got their dates – so online, friends, bus stations! An important thing to also note for 3six5dates is that it is not 92 men – but 92 dates within a year. Each women are allowed up to 10 dates with the one man as we wanted to see how things progress or fall apart in the early stages.

MO: Were you able to test your initial idea for market viability?

Shelli: I believe with every idea or concept, there is a way to conduct research and test market reception – no matter how unique and revolutionary. There is always a business out there who is doing something similar to what you are doing and could change their strategy slightly and end up being your direct competitor. For 3six5dates, I looked at a lot of the dating blogs and websites already out there. I researched how successful they were and why certain ones did better than others.

Then, as mentioned already, I did further testing by writing a position description for the four women who were to take on the experiment. If I could find four, great women to take on the dating social experiment – I could see no reason why I would not do it. I, of course, got more than I bargained for – and out of everything 3six5dates has achieved, I am most proud of how passionate and committed our team are.

MO: You have women in London, New York, Sydney and Shanghai. Are you seeing any patterns or trends emerging that can be attributed to the location? Or are they all having similar amount of misadventures or successes?

Shelli: There are definitely some similarities that I did not expect to see when I started the project. I am finding that the men and women on dates seem to misunderstand each other regardless of cultural backgrounds – and I’m sure some of that has to do with the fact that neither sex know what they actually want or what makes them happy!

However, there have been some surprises also, for example, I had expected Shanghai to be conservative in dating, but in my opinion, it sounds like the Asian version of fast-paced NYC!

MO: Do you have any other business ideas lined up after 3six5dates.com ends?

Shelli: Where do I start?! I have a few buns in the oven, yes. Some I have tested for market viability with possible business partners on board and some are just ideas. I’m also always on the look out for new startups that need a bit of marketing help so outside of my own ideas, I am also contributing and assisting other entrepreneurs. I expect to be contributing to this space for a very long time!