“At the end of the day our goal is to make MySocialCloud a success, not only to help people in their daily online lives, but also inspire others and prove that young teams of devoted people who receive investment will succeed.”

Stacey Ferreira co-founded MySocialCloud when she was just 17. And at 18, Stacey and her team secured almost a $1Mil in funding from Sir Richard Branson and Jerry Murdock – making her one of Sir Richard Branson’s youngest investment. Last year, Stacey was a student at New York University studying Music Business in the Steinhardt school. Next year, she will take a leave of absence from NYU to focus on MySocialCloud.com full time and pursue her dream as an entrepreneur.

MySocialCloud is an online community that allows you to easily share online content as well as organize, customize and store any of your online information. MySocialCloud also eliminates forgetting usernames and passwords and allows storage and organization of any online URL-based content (videos, photos, articles, etc). 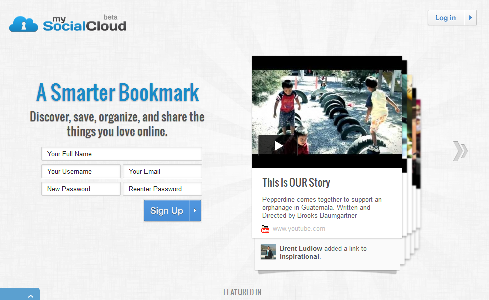 MO: Can you talk about how you were able to raise just under $1million in investment for MySocialCloud from Sir Richard Branson (of the Virgin Group), largely because of one Tweet on Twitter?

MO: What problem is MySocialCloud solving?

Stacey: Everyone has forgotten a username and password. It’s literally impossible to remember all of them – at least, as long as you try to be safe online and have different passwords for all of your websites. MySocialCloud completely eradicates that problem by offering an auto-login feature for all of our users to access all of their websites with just one click. It does a host of other things as well, like aggregating your Twitter and Facebook streams in one place and allowing people to categorize and organize information from all across the web into “lists” that can then be shared with friends.

MO: MySocialCloud grew out of a software programming hobby that you were working on with your brother during high school. Were you always aware of its potential to become mainstream on a global level or was it initially just for fun?

Stacey: Initially programming was just for fun. As kids, both my brother and I were fascinated with the Internet, and I think we knew the impact it was having on a global scale but I don’t think we ever imagined that we could create something to have global impact when we first started programming. My brother, Scott, was definitely the first one to think of programming as more than a hobby. He started working for Joomla! in high school, and that was always something that inspired me to learn more.

MO: How does it feel to be one of the youngest people that Richard Branson has ever invested in? What valuable lessons or insights to you hope to gain from working with him?

Stacey: I feel extremely honored that Sir Richard Branson and Jerry Murdock both invested in MySocialCloud. And although I am young and that is often a highlight, I know MySocialCloud, the investment, and everything else that we have been blessed with wouldn’t have been made possible with out Scott, Shiv and the rest of the MySocialCloud team. The whole journey was a team effort and collectively, we’re all very excited that Branson and Murdock invested. At the end of the day our goal is to make MySocialCloud a success, not only to help people in their daily online lives, but also inspire others and prove that young teams of devoted people who receive investment will succeed. We all hope to learn from all of our investors about their successes and failures. And while every company is different and every time period is different, we’ll hopefully be able to avoid some road bumps from their advice.

MO: How has MySocialCloud evolved since you first developed it?

Stacey: Every day MySocialCloud is evolving. It’s hard to think back to when we first had a working prototype that was simply an add button and boxes on a page with our information stored in them. We’ve come a long way, having a fully functional product that we’re now just tweaking everyday and sometimes changing based on user recommendations. Our team has evolved extensively as well. We now have 9 very busy, amazingly smart people working in the MySocialCloud office everyday.

MO: Have you ever had anyone not take you seriously or question your credibility due to your age? What advice would you pass on to young entrepreneurs reading this interview?

Stacey: I definitely have had people question me because of my age. I’ve also had people make remarks because of the fact that I am a girl working in the technology field. Luckily, these people are rare and when I do encounter them, I simply realize that everyone is entitled to their own opinions.

I would definitely encourage other young entrepreneurs to pursue their dreams no matter what other people say and band together with other young entrepreneurs. There is truly nothing better than having a support system of friends who understand what you are doing and are always there to talk about new ideas, even if you don’t end up doing anything with the ideas together.

MO: I saw that you had posted on your blog that you’d like “to rent a house with a group of kids who are interested in entrepreneurship and building our own stuff.” I love that you’re actively reaching out to your peers and trying to create, brainstorm and network with them. Is there anyone that you’re currently impressed with or inspired by that you’d like to give a shout out to?

Stacey: Oh boy, I could name a ton of people who I’m really impressed with and who inspire me. I think everyone my age (or older than us for that matter) that is taking the time and courage to build their own businesses or change the world by pursuing a passion deserves a definite shout out.

To name a few to keep your eyes on: Daniel Brusilovsky, David Byrd, Dale Stephens, Andrew Rauh, and Amanda Aizus.

MO: You’ve already made business history before even reaching 20 years old. What’s next for Stacey Ferreira?

Stacey: I recently decided to take a leave of absence from New York University and pursue MySocialCloud full time in Los Angeles with the rest of the team. And in the next couple of months, my brother and I will be taking a journey with 20 entrepreneurs and a group of investors to Moab, Utah to symbolize taking the leap into entrepreneurship by experiencing the world’s largest rope swing – the Corona Arch. We’re just opening the application process at www.leapinto.it – so that is just one example of something coming up that I’m really excited for!