“More than any other pursuit in life, the political world has a day of reckoning for the candidate and the company working for that candidate. Win and you get more work, lose and clients become scarce.”

Steve Grubbs serves as CEO of Victory Enterprises, Inc. While involved in management of the company, his primary responsibilities are guiding software development, product development, sales, marketing and vision as well as a handful of high profile political accounts. Steve curently serves as Chairman of the Young Presidents’ Organization Internet and Technology Network. He is a former Iowa state representative and Chairman of the Republican Party of Iowa. He graduated from the University of Iowa Business school as well as its law school. Steve has extensive experience in politics, both as a candidate and in the management of campaigns. Steve’s clients have included Bob Dole, Steve Forbes, Herman Cain and Tommy Thompson.

VictoryApps designs and sells mobile apps for iPhone, Android and other platforms.

Victory Enterprises is a consulting firm for technology and political clients. 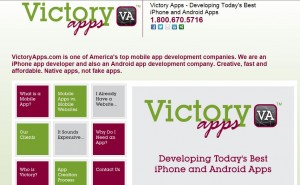 MO: After having such a long and impressive background in the political arena, what inspired you to launch a company that designs and sells mobile apps?

Steve: I love technology as much as politics. In 1997, when my wife asked me what I was going to do for a living, I purchased a book titled, “Websites for Dummies,” read it over a weekend and on Monday hung out my shingle as a Web developer. There was no one else in the area that developed Web sites, so people had few choices in those days. We all learned a lot, to say the least. From that we began working in various fields of technology for our clients. Then we used that knowledge to start VictoryStore.com which grew very quickly, even during the 2001 Internet crash. Now we learn on our own properties and take what we learn and apply to our clients. This makes for a more successful model on our consulting side.

It became clear in 2009 that mobile apps would be a huge market. It was important for us to get out front of that, so we began the learning process. It is challenging with all the various formats, but so far we have figured it out. 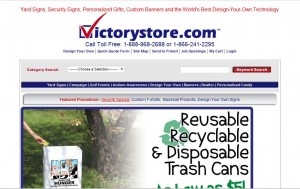 MO: How has your political experience contributed to the development and success of Victory Apps and VictoryStore.com?

Steve: There are two lessons from politics that make me a better businessman. First, one must move quickly in a campaign. Relative to a business career, campaigns are quick and you’re better off making a fast decision and getting it right 70% of the time than a slow decision getting it right 80% of the time. Second, in campaigns, you must measure or die. If a message isn’t working, get rid of it quick and find something that is. More than any other pursuit in life, the political world has a day of reckoning for the candidate and the company working for that candidate. Win and you get more work, lose and clients become scarce.

We built an app for Herman Cain’s campaign. It was a great opportunity to move quickly, integrate social networking into the system and work on a high profile mobile app. Unfortunately, between the time we submitted it to Apple and the time it was approved, Mr. Cain had dropped out of the race. 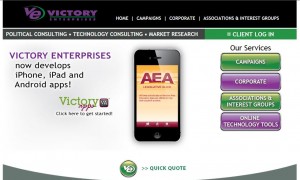 MO: Mobile apps have exploded in popularity during the last year. How do you think that this relatively new platform for technology will impact the 2012 election campaign?

Steve: Elections are about connecting messages to voters and helping volunteers to deliver messages to their personal networks. Mobile apps are a perfect tool for these tasks. It has always been the dream of candidates to have a way supporters could carry the campaign in their pocket. Today that is possible. We created an app called Mobile Voter (located at www.MobileVoter.us). This gives candidates the ability to have every voter in their phone, with GPS mapping and a survey tool to learn if they want a yard sign, need a ride to the polls or would like to vote absentee. In addition, once they tag this in their phone during their door-to-door canvassing, it is automatically updated to the cloud, giving them immediate access to it on all their devices. The power of having a campaign in your pocket is revolutionary.

MO: What inspired you to buy your own elementary school?

Steve: I was coaching flag football and needed a place to practice. We drove to my former elmentary school and there was a small notice posted on the gate that it was up for auction. So, $105,000 later, my wife and I were the proud owners of a 55 year old, 26,000 square foot school building. I never dreamed we would use the entire facility plus an additional three buildings which we added later. With a little conversion work, the K-3 classrooms became offices, the 4-6 classrooms became production rooms and the gym, well, it remained a gym. We have played over 10,000 games in our informal pickup league since we purchased the building in 2001.

The school is well located. It’s near my home with no traffic lights between the two. It’s also located at the intersection of an Interstate and a state highway. Finally, it’s only 12 minutes to the airport. With six acres of land, it has been a tremendous facility to grow new enterprises.

It has a lot of sentimental value to me as well, so I have preserved it as much as possible. The lockers are still in the hallways, the sign is still on the outside walls and the bathroom mirrors are still too low. We did, however, raise the basketball hoops up to 10′ from their elementary height of 9′.

MO: Have you had any mentors during the course of your career?

Steve: I have had many mentors. Tom Tauke, one of the top executives at Verizon Inc., was my first boss when he served in Congress and a very important early mentor. His humility, hard work and advice have been important to how I try to model myself. He is an excellent example of someone who has transitioned from politics to a successful career in business.

My high school debate coach was also instrumental. He gave me the opportunities to learn to think critically and express those thoughts through the spoken word. These skills are essential to success in almost every area of life. Of course my parents were formative in who I am today, so I have to mention them.

MO: With three thriving businesses, how do you manage to find balance during stages of rapid expansion?

Steve: Balance can be a challenge. I am also a high school debate coach and with four children, it’s important that I make time for family. I have two very important advantages: first, my wife Kelli, is my business partner and she is also an excellent mother. She holds down the fort and makes sure the children have great guidance in school. In addition, I feel like I have mastered the art of working wherever I am at, so I don’t have issues that build up when I am gone. In fact, I begin most mornings at Starbucks working and writing from a small table in the corner. Coaching debate gives me the opportunity to get away from my own life and invest time in the lives of students. I love this! My children are on the team and it also gives me a tremendous quantity of quality time with them. I have a philosophy that well balanced people are squares with four sides: physical, social, intellectual and spiritual. I try to continuously work on all four. I cannot say I always succeed with this goal, but by realizing the need for each one, I find some level of balance.