“A lot of people have said that the internet is a teenager. Guess who understands a teenager best: a teenager.”

Syed Balkhi is the founder of WPBeginner. He is known for his aggressive marketing skills, creative designs, and expertise in SEO. Syed has been in the industry for over eight years, and he has worked with some of the top brands in the industry. Syed is known as “the WordPress Ninja” among his clients because he is a total WordPress geek. What makes this more impressive is that he’s only 21 and started doing “online stuff” when he was just 12. 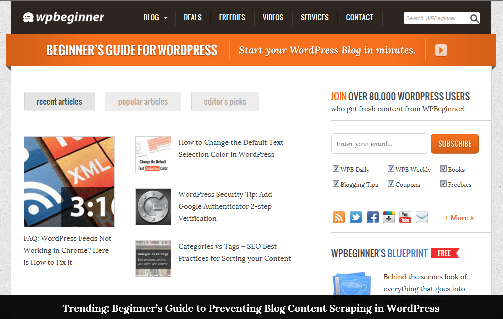 MO: How did you go from having fun online at 12 to acquiring web portfolio, becoming an SEO expert and a ”WordPress Ninja” by 21? How much help and support did you have from your friends and family along the way?

Syed: I was addicted to this site called Neopets where I would get up in the middle of the night to trade stones. My family had moved to United States recently, so I had nothing better to do. I also didn’t have a huge allowance. One of my cousins who was interested in the web stuff, told me “Hey, since you get up in the middle of the night to save ‘fake currency’. Why not do it for real money”. He went on to tell me about the art of registering expired domains. It didn’t take long to convince me to start with buying and selling domains. I was also addicted to the game Age of Empires. I would play the game online with other people. If you have a gaming background, then you know games like these have guilds/clans. I was part of a clan. Since I had the most technical knowledge out of others, I was volunteered to setup a website for our clan. While I was learning Photoshop, knowing HTML and others were not my strong suits. I decided to go on with a free website builder Webs, formerly known as FreeWebs. At this point, I was still buying, selling, and trading domain names pretty successfully. I decided that the real money was in developing those domains into valuable websites.

I had just started high school, and I had a language barrier which caused me to spend majority of my extra time in the library. The school library computers blocked all arcade sites, so I couldn’t play any game. I decided to look into it to see if there was a way around it. Turned out there were these things called web proxies which you can use to override the server firewall. I learned how to create proxies and put it on one of my domains that I wasn’t using. I used my own websites to play games in school. Other students started asking me how I was doing that. So I told them my proxy site. Turned out that it was getting popular, so I put ads on it to monetize it. That launched a new career. Because the school server admins would catch and ban the proxy domain once it started to get popular, I would sell the site. Since proxies were pretty easy to recreate, I would start a new website with another domain of mine. This launched my web career where I created other websites like arcades. While promoting my proxies and arcades, I learned that you had to build backlinks at the time. Everyone was using web directories. I also learned that web directories were slow in approving sites, so I decided to use an existing script to create my own web directories. Since I already had over 400+ domains in my portfolio by this time, I could setup random web directories. At this point, I was getting a hang of developing websites, so I decided to start my own web development firm. I would help out local companies with their websites.

Around 2006, all the niches that I was in were super crowded. I saw this new market that interested me, blogging. I did some research and learned that WordPress was the best script to go with. I added a blog to one of my existing website using WordPress. The more I used this platform, the more I felt in love with it. By 2009, I wanted to move all of my clients over to WordPress because I was tired of creating static websites. The clients were unable to modify basic information on their websites without my help. I knew WordPress was the solution. I convinced my existing client base to switch to WordPress because that would save them the monthly retainer that they pay me. For me, it was the best decision I ever made. Because this frees up my time doing basic tasks into doing something more productive. Soon after I switched, I saw an increased request in support from clients. They were asking me the same basic WordPress questions. I was copying and pasting the answers in email when it occurred to me why don’t I create a support wiki. I looked around in the niche, and all I saw were sites made by developers for developers. I quickly decided to create a site called WPBeginner. Within few months of launching it, other developers and consultants were referring people to it. It got quoted in Wired Magazine, Mashable, and countless other sites.

This helped me get notice and put me in front of larger clients. From one recommendation to another, I actually ended up building the WordPress blog for Webs Inc., the platform that I used to create my first website.

I think I would’ve never been able to do what I did without the support of my family and friends.

MO: Where does your passion for WordPress come from? Any tips for anyone just starting to use this tool?

Syed: I think my background story should say enough about where the passion for WordPress came from. The more I started using it, the more I loved it. Now WordPress is a powerful content management system. The project has evolved so much, and I’m proud to be a contributing member of the community. The best part about WordPress is the awesome community it has. Everyone is willing to help and share their knowledge. This is the reason why it has so many great plugins. My best advice for someone who is starting with WordPress is just do it. If you have any questions, use the support forums. Or better yet, send us an email at WPBeginner or tweet at us @wpbeginner. We help tons of users by answering their questions. We also have a good set of videos for beginners to start watch. It’s available for free at: http://videos.wpbeginner.com/

Lastly, the WPBeginner site is a free resource for everyone. Majority of our article comes from our users. We would get an email regarding a problem. The solution often ends up becoming a post on our site. Feel free to send your questions to us because it has a potential of helping a lot of other people in the community.

MO: What did it feel like getting invited to Summit Series an event with amazing entrepreneurs like Peter Thiel, Russell Simmons, Richard Branson etc.? What did insights did you gain from the experience?

Syed: When I got invited to Summit Series, it was totally amazing. I knew some folks that were going to be there because I had exchanged emails with them or had work with them, but never met them in person. But then there was guys like Russell Simmons, Peter Thiel, and Richard Branson whom I had only heard of. It was a pretty amazing event. I got to network with a lot of people, and I made some very good friends. It was mainly a networking event, but I did learn a lot from other people’s experiences. I learnt about failure/struggle stories of many startups and how they overcame it. It’s always good to have that kind of knowledge.

MO: What’s the best advice that you’ve been given?

Syed: The best advice I’ve been given is by mom. She always tells me that you need to make a great first impression. I think that translates into just about any business. In the online business, users have a very short attention span. If your website doesn’t attract them on the first sight, they will leave.

MO: Can you talk our readers through how you increased your normal traffic from 1100 unique visitors to 3600 unique visitors per day on your blog in just five days? Can you tell us how you took one of your websites from 0 to 5 million pageviews within 3 months?

Syed: A wise business mentor and friend told me that if I wanted to successful, then I have to create something that others needed/wanted. My reply to him was “a lot of people have said that the internet is a teenager. Guess who understands a teenager best: a teenager”. As I look back, I did just that from the days of proxies and arcades till now. Students in my school wanted to play games, and I gave them a way to do so. People wanted to learn how to use WordPress, and I created a resource site. While sitting with a friend in Europe, we came up with an idea to create a site only about lists. Just a list of random, funny, bizarre, yet interesting ideas. A site named List25 was born in Nov. 2011. I created a pretty successful facebook contest which catalyzed our growth. I was engaging with the audience on facebook, twitter, youtube etc. I networked with relevant sites in the industry. I couldn’t possibly talk about all the little details that we went into. I’ve never really written about the full story on the blog. However, I did send out a fairly long email to our subscribers. You can view the archive here:

MO: What’s next for Syed Balkhi?

Syed: I’m a pretty open person when it comes to everything else aside for business. I can say that we have some exciting new features coming for WPBeginner users. List25 videos will see a huge overhaul in terms of the frequency and their structure. In short, I’d say that I’m totally focused on growing WPBeginner and List25 at the moment.