“Launching a tour company allowed us to create our own jobs and build a unique brand in the tourism industry.”

Los Angeles is such a big city, it’s hard to decide how and where to start exploring. Let TOURific Escapes give you an insider’s guide to this great city and make it a little easier for you.

Celebrating its second anniversary, TOURific Escapes is a food and sightseeing tour company located in Los Angeles offering a unique view of Hollywood. 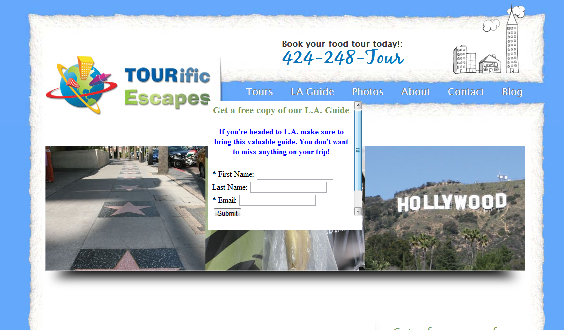 MO: Can you talk about how your backgrounds and experience have made you the perfect tour guides for Los Angeles and the surrounding areas?

Matt: I’m a Los Angeles native and a commercial pilot. I have traveled internationally and domestically over the past dozen years. While I love traveling the world, there’s no place I’d rather call home than Los Angeles.

Trish: After nine years teaching elementary school, I then became a crew member onboard Princess Cruise ships as coordinator of the popular youth program. In my spare time, I volunteered with the Shore Excursion department and accompanied large groups of passengers on various forms of land tours. When I moved to Santa Monica in 2001 to take a role as a Focus Group Moderator at Mattel, Inc. I became an informal tour guide as friends from around the world came to visit. I bought my first Zagat guide and started exploring neighborhoods by its restaurants. I remember when I drove friends an hour east of LA to a donut shop because it had a drive-thru donut hole. Then we had dinner in an Airstream Diner in Beverly Hills, which is now gone. My first visit to Roscoe’s Chicken & Waffles was memorable too! When Matt and I met in 2006, we talked a lot about our travel dreams but agreed how great it is to live in LA. There is so much opportunity here. You could take a “staycation” every weekend and not run out of things to do.

MO: Can you share a bit about your entrepreneurial journey of starting a company from scratch in a very competitive market with very little capital?

Trish: I have to say Matt was really the driving force behind starting our own company.

Matt: I used to watch Trish put on her name badges for a variety of different companies, putting her best efforts out there to represent their brands. One day I realized we could be building our own brand in LA’s tourism market and create jobs for ourselves at the same time.

Trish: When we decided to move forward, Matt took the reins and started on the internet. He researched the process in-depth since we were starting from scratch. There are so many licenses we had to apply for! We took advantage of as many free small-business meetings as we could. We found our investors in the “Bank of Mom and Dad” since we could not get a traditional business loan due to our unemployment situation. After writing our business plan, we knew our biggest initial expenses were going to be purchasing the van and building our website. After those were in place, we stumbled onto our first major eye-opener: finding customers! We truly thought “if you build it, they will come” but quickly found out that we needed funds for marketing.

Matt: You can have the best product on the market, and have a plethora of great ideas, but if nobody knows about you, you’re not going to sell ticket tickets to your tour.

MO: Can you share a special place (or places) in or around LA that most people wouldn’t think of or know to visit?

Trish: There are so many great places in Los Angeles; in fact my to-do list never gets shorter. One place that I discovered recently is the Hollywood Museum, in the historic Max Factor building on Highland Avenue near Hollywood High School. It is the largest collection of movie memorabilia in the world, and they often have special private collections on display. I can spend hours at a time there. Another great spot is the view from Yamashiro Restaurant, high on the hill behind The Magic Castle. Every Thursday from May to September they hold a Farmer’s Market and it’s such a lovely way to view and appreciate our beautiful city, while enjoying local food, fresh produce and music.

Matt: In addition to airplanes, I really love vintage cars. There’s a great museum in El Segundo near LAX called The Automobile Driving Museum where they have over 60 cars on display. On Sundays they take a few cars out of the building and take you for a ride! Also near LAX is the Flight Path Learning Center and Museum, which houses a really nice variety of aviation memorabilia including a DC-3. Trish really liked the display of vintage stewardess and pilot uniforms!

MO: What inspired you to combine food and tours? What are some of the stops that you receive the most enthusiastic feedback from?

Matt: When we launched in August 2010, there were already three great food tour companies in town, and they were all doing walking tours. We knew we had to differentiate our company somehow. We discovered that Hollywood receives 10million visitors a year. So we started thinking that we could do a Hollywood tour of all the sights and landmarks that people want to see. We originally thought we might stop for a snack or two, since you get hungry on a 4-hour tour. As the tour and the route developed, it became clear that we could put together a really fun and interesting experience combining Sites and Bites, which is how we got the nickname for our Hollywood tour.

Trish: We came up with a few criteria, and chose restaurants that were Hollywood landmarks, or owned by a celebrity chef or just had a really interesting story about how they came to be in business in Hollywood. One of our landmarks is Greenblatt’s Deli on Sunset Boulevard that’s only been owned by two families since 1926 when it first opened. Many famous people, past and present, have dined there. But it’s the pastrami that our guests really love. Even those who have never tried pastrami or thought they didn’t like it, rave about Greenblatt’s.

Matt: Then there’s STREET owned by Susan Feniger. This is where guests get more of an international experience with food from India, Korea and Thailand to name just a few. We love telling the story of Susan’s discovery in Singapore, a local “hangover cure” called Kaya Toast. It has become an unexpected favorite taste for many of our guests.

MO: Can you share a surprising or little known fact about your industry?

Trish: We’ve discovered that travelers rely on each other for recommendations and suggestions. They want to know their hard-earned vacation dollars are being well spent. Two reputable review sites that our guests frequent are TripAdvisor and YELP.

MO: What sets you apart from other tour operators in the LA area? What makes TOURific unique?

Matt: We pride ourselves in our customer service, from start to finish. Since we are the ones answering the phones, planning the tours, leading and driving the tours, we interface with our guests through every facet of their experience. We will spend as much time as needed on the phone, answering questions from visitors who are coming to LA for the first time and might be overwhelmed with where to start.

Trish: We also really get to know our guests during the 4-hours they are on tour with us, and often give advice and suggestions for other tours/attractions/restaurants that they might like to visit. Because we have a maximum guest count of 12, our tour becomes very personal. We want our guests to feel as if they are good friends visiting us for the weekend, and we show them the insider’s view of Hollywood. We introduce them to the staff, managers and owners whenever possible, and we love to celebrate birthdays and anniversaries. TOURific Escapes is unique in that we try to create memories for our guests through the Sites AND the Bites. Of course people come to Hollywood to see Grauman’s Chinese Theater, the Walk of Fame, the Capitol Records building and more. We tie in photos and stories that make those landmarks more memorable. But honestly it’s enjoying the various tastes of the restaurants that people really remember.

Matt: Also, we are different than the other food tour companies because of our van, which allows us to travel over a wider area. We go from one end of Hollywood to the other, covering about a 10-mile route so we can include those places that are off the beaten path. And we’re different than a traditional Hollywood tour because we don’t focus on the movie star’s homes; instead we go to where the stars might have lunch! And we tell the stories of those who have dined there before, really creating a memory and a feeling of being part of the Hollywood scene.