Tom Cannon served in the US Navy during the First Gulf war, been instrumental in the launch of three successful companies, held executive-level positions in sales, marketing, and management and today is the CEO and co-founder of BungoBox. He created the company with his cousin Bob Cannon, a commercial real estate investor and broker. BungoBox is the 2011 Shark Tank Competition Winner BIG Award Participation in Doc-series The Mentor.

BungoBox is an innovative company that is transforming the traditional moving process. They rent recycled and recyclable industrial strength plastic moving boxes to commercial and residential customers as an alternative to the traditional cardboard box. BungoBoxes do not need packing tape, come with removable contents labels, security features to prevent tampering; they are stackable and crush proof. 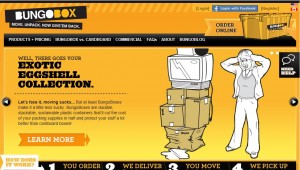 MO: Why did you create BungoBox? Were you initially more concerned with the environmental aspect or the convenience aspect or were they always equally important?

Tom: I served four years in the US Navy and was involved in the first Gulf War, so I have a background in distribution and worked – over 20 years – with many large companies that utilize distribution centers. I came across such boxes when walking through distribution centers. Around the same time, I was helping a friend move to a new house. Then, it hit me. It would be a lot easier to use such boxes instead of cardboard ones.

So I began to look into what it would take to get a hold of some of the boxes. And the rest is history.

The environmental aspect was also key because we realized the need for an alternative to cardboard. Surprisingly, until now, there really hasn’t been a good alternative. Weʼve been using the same environmentally unfriendly materials for the past several hundred years. And, unfortunately only half of the cardboard Americans use actually gets recycled. The rest gets tossed into the garbage. If it’s up to us, though, that will all change. Who knows, maybe 20 years from now cardboard will be a thing of the past.

One BungoBox will replace a minimum of 250 average cardboard boxes during its lifetime. Therefore, in the long run, a single BungoBox will save 1,575 gallons of water, four large trees, 923 KW hours of energy and 40 gallons of gas.

MO: Your slogan is, “We Make Moving Less Sucky.” How do you fulfill that promise?

Tom: BungoBox is a sustainable, convenient, cost effective alternative to the traditional cardboard box. It’s a simple concept with wide-ranging potential. Here’s how it works: A BungoBox truck delivers the stackable moving boxes (a large box of about 2.5 cubic feet rents for $1.75 a week) to a customers’ doorstep. Once they’ve been unpacked, BungoBox picks them up at the new residence.

Our process takes a lot of the stress of moving away.

MO: What was the most challenging aspect of getting your idea to market?

Tom: Everything will cost more and take longer than you expect. No matter how conservative you are on the front end, no matter what cushion is built into early numbers, they will be wrong. This occurs because everything is just a guess, most numbers are pulled out of thin air and massaged into some sort of artful projection. If you have remodeled or built a house, you know exactly what I am talking about. The thing is, you cannot leave your home half remodeled, and you cannot leave your company half built either. Money is the key to solving these problems. Most start-ups fail because of lack of capital, not because of the idea. I learned that you must always be looking at least 3 to 6 months ahead, and if you need money in six months you better be aware of it and be working to solve that problem, with investors or loans.

MO: What influenced you to franchise BungoBox and how has that decision transformed the evolution of the company so far?

Tom: We built BungoBox from day one to be a franchise. Every decision we have made is to benefit the franchise system and the franchisees. We think that with BungoBox we have a unique opportunity to build a franchise system that is a true interconnected network of locations. This will allow our customers over time the ability to move just about anywhere and utilize the BungoBox system.

Franchises are a key component of our strategy, for they will provide the network necessary for the company to target the interstate moving market and expand nationwide.

MO: Do you think of yourself as an innovator? Have you ever designed anything before BungoBox and do you have any other ideas that you’d eventually like to bring to life?

Tom: We are rethinking the traditional moving process. We think that is pretty innovative in itself. Surprisingly, there really hasn’t been a good alternative to using cardboard since it was invented in 1890. Now, however, there is a choice — BungoBox, which is more affordable and eco-friendly. BungoBoxes are made up of durable, recyclable plastic and can be used up to 400 times before being recycled again.

We are also proud of the fact that we are creating jobs. Thanks to BungoBox, there are about 30 new jobs in Central Florida. And the company was profitable in his first full calendar year of business and it is continuing to grow by leaps and bounds. Their goal is to be the largest, most recognizable and best moving box rental company in North America, with well over 100 locations in the United States and over 30 locations in Canada within five years.

Yes, we’d love to bring other ideas to life eventually.

MO: What company accomplishment are you most proud of so far?

Tom: Successfully launching a corporate location and 11 franchise locations across the Southeast and in Canada in a matter of a year. In fact, when we became eligible to sell franchises in late 2010, we had more than 200 applicants interested in buying a franchise.