“It’s the hardest work I’ve ever done in my life, the most risky and yet, completely exhilarating.”

Victoria Westcott taught in London from 2004-2007 and then started Classroom Canada in order to help other teachers make the move across the pond. She has recruited hundreds of teachers to work in London and is pleased to be in a position where she can work less hours and spend more time producing movies with her sister. 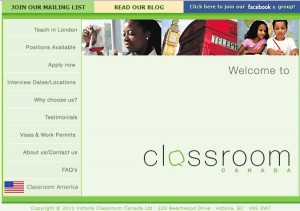 MO: What initially attracted you to teaching in London? What did you love about the experience and was there anything that you didn’t really enjoy?

Victoria: I graduated from Queen’s University (Kingston, Ontario) in 2004 and knew that the job market was very competitive for teachers. Without many prospects in Canada, I decided to look abroad instead, and London was an easy choice to make. It allowed me to teach full-time while spending my weekends in places like Paris, Edinburgh, Barcelona…it was truly an experience of a lifetime. The hardest part was of course the actual teaching. London schools are generally quite tough, much like New York City. After a pretty rocky first six months I started to love the experience. I figure the first six months of teaching are tough wherever you are, so you might as well get those jitters over with in a place you love to live in.

MO: What inspired you to take your teaching abroad experience and turn it into a business?

Victoria: I volunteered in International Development & Health Education in Costa Rica, Guatemala & Bangladesh before getting my teaching degree, and used to recruit volunteers for projects overseas as well. So when I was recruited to teach in England, I could see what things I wanted to improve upon for the new teachers arriving from Canada. My agency hired me as a Recruitment Consultant, then promoted me to an International Recruitment Manager – which meant that I was recruiting Australians, New Zealanders, South Africans, Canadians and Americans. Over time, I realized that I could focus in on what I knew best – recruiting Canadian teachers for London – so I started Classroom Canada to work alongside Classroom London in the UK. We have an arrangement where I recruit exclusively for their agency in London & they find jobs for my Canadian teachers in return.

MO: What three pieces of advice would you give to a Canadian going to London to teach for a year?

Victoria:
1. Do your research. Attend webinars, read books & blogs, find others that have gone before you and ask them questions.

2. Be positive. London schools expect you to have “positive behavior management strategies” which means, you see the good things that are happening in your classroom & encourage the others to do the same rather than “naming & shaming” the few students who are misbehaving. But also – be positive in life. Positive teachers are way more fun to be around, both for the students & your colleagues.

3. Laugh. Find something amusing that happens in your classroom every day. Do things in your free time that make you laugh. Life is supposed to be fun! Live it.

MO: You also produce movies with your sister. How long have you been in the production business where did your love of filmmaking come from?

Victoria: I do. We filmed our first feature film (90 minute movie) last summer, called LOCKED IN A GARAGE BAND . It’s a coming of age comedy about a high school garage band on the verge of breaking up that gets locked in their garage for a day. We’re almost finished post-production and will start submitting the movie to festivals like Sundance & Toronto International Film Festival in the spring. My sister is our Writer/Director and I’m the Producer, which means that she handles the creative side of things and I tackle the business side, as well as recruiting the right members for our team. It’s a perfect fit for our skills & interests. 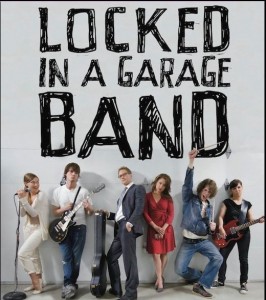 MO: You’re now doing webinars for Classroom Canada. Can you explain the process of putting this service together and what influenced you to donate the proceeds to Pocket Change Heroes?

Victoria: I’ve been blogging for Classroom Canada since 2008, and wrote an ebook, Guide to Teaching in London: A Survival Guide for Canadians, which won an honorable mention award from Writer’s Digest for “best non-fiction ebook” in 2010. While I love writing, I find that sometimes it’s better to give the same information by speaking directly to people. So the webinars are a way for me to offer workshops or seminars, but for our teachers who live around the world. I donate to Pocket Change Heroes because they build schools in West Africa. I used to offer the webinars for free, but people are funny about free things online. They almost don’t trust them, and think that a free webinar is just one big long advertisement. As soon as I started charging, (even as little as $5), my attendance went from 5 attendees to 25. So I figure I might as well give the money to a solid organization that’s making our world a better place through education.

MO: Can you tell our readers a little about the film you made this past summer?

Victoria: Sure. Most people are interested in movie budgets, so I will tell you a bit about how we raised our financing first. We used kickstarter.com to crowdfund the money, and asked for $20000 to film our movie. People pledged money in exchange for rewards or perks. I did a TED X talk about crowdfunding here. It was an “all or nothing” campaign which meant no money changed hands unless we received
$20, 000 worth of pledges. It came down to the final 2 minutes, when we managed to raise $20,101, mostly through twitter and facebook.

We filmed over 10 days, in a house we rented from a good friend of mine. Our cast & crew lived in the house for the 2 weeks and we became a little family of sorts. We spent most of our time in the garage – the movie has six lead actors, and with all the lights, camera and crew –the space became a kind of stinky sauna very quickly. We usually had about 16 people in that garage every day, filming for 12-14 hours/day. It’s hard to describe what that’s like – but there’s something really beautiful about filming a single location, ultra-low budget movie. The actors really rose to the occasion, and my sister was in her element – completely focused & driven to get the best performances in such a short time period. I can’t wait to start working on our next movie, which we will shoot in 2013. It’s the hardest work I’ve ever done in my life, the most risky and yet, completely exhilarating.