From a childrenʼs band to the hippest social media jewelry on the block, Ashley Albert is what we refer to as a cool entrepreneur. Her two companies, while both extremely entertaining, are very different, so weʼll address them separately.

The Jimmies fairly accurately described as “bubblegum meets indie,” are the creation and vision of New Yorker Ashley Albert, the daughter of music producer Howard Albert. Albert grew up surrounded by music and musicians, and for her, falling asleep on the studio couch while performers like the Allman Brothers or Eric Clapton tracked material in the next room was all a part of normal life. A debut album, Make Your Own Someday, produced by Albert along with her father, Howard Albert, and her uncle, Ron Albert, in Miami, appeared on Albert’s own Pluckypea Records imprint in 2008 and was originally distributed out of her New York living room. 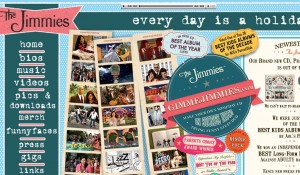 MO: Tell us about The Jimmies and why you think it is important to offer this music to children?

Ashley: I started the band sorta by accident—someone THOUGHT I had a band when I didn’t–and until I got thrown into the fire , I didn’t know that I could write songs or sing or even be an entrepreneur, for that matter…but I’ve always had a deep affinity for the ridiculous and I’m always the one hanging out at the kid’s table at the party. Once the ball was rolling, no one seemed particularly surprised that this was the path I was sauntering down. But, five years later, I’d say that I love making music for kids who are old enough to be in on the joke and young enough to not take themselves so seriously. Letting a kid celebrate their kidliness is just about all I could ever hope for.

MO: You originally distributed the album out of your New York living room. How did you get the word out about your album and what interesting marketing techniques did you use? Twitter has been huge…It’s amazing how far the reach is! I feel like I can honestly say that I’ve got a friend or a fan on nearly every continent that I didn’t have 3 years ago because of it. Facebook is pretty magnificent for getting fun news out fast as well…And I feel like I’m using The Jimmies Facebook page more and more everyday.

The other thing I do is literally talk to EVERYONE I come across about The Jimmies…if I see a cutiefun kid sitting on the subway singing to himself, I’ll walk over and hand him a CD before making a quick exit. Hm. Now that I say that out loud, it sounds a little creepy, but it’s usually well received.

MO: Tell us what we can expect from the newest Jimmies album, Practically Ridiculous?

Ashley: At the risk of sounding totally pretentious, this record feels considerably more musically “advanced” than our first record…I don’t think people would’ve bought the idea that it was “kids” music had it been our inaugural attempt. But now, I’m pretty sure that they know how deadly seriously I take being silly and trust that even if it SOUNDS sort of adulty, the themes are really for a third grader. 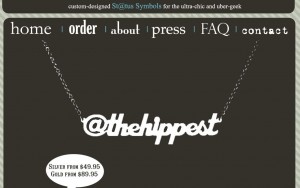 MO: I absolutely love the jewelry you sell on The Survival of the Hippest! Tell us about the conception of this unique jewelry company.

Ashley: Hey, thanks! I actually came up with the idea completely out of necessity…I started to amass a pretty big following on Twitter because of The Jimmies, but because the profile pictures on there are so teeny-tiny, I’d find myself talking to someone at a cocktail party for 45 minutes before we’d realize we’d swapped carrot cake recipes the day before on Twitter! I realized I needed a secondary identifier to display my “handle” to those who were “in the know”. I found a jeweler in the diamond district to hand make them, taught myself photoshop to make a website and came up with a name. (I firmly believe that starting a business is 72% coming up with the name.) And that was that. It was a runaway train before I knew it.

MO: The voice you use on the website is fun, sassy, and definitely unique. Can you speak on the “culture” you are trying to create in The Survival of The Hippest?

Ashley: I would say that, with both of my “brands” and really, with everything I try to do, I aim to speak as close to my authentic “voice” as possible…If I had to define what that voice was, I suppose it’s more casual and relaxed than what you might typically expect from a company…It’s really important to me that we treat every single person we deal with from the vendors to the customers to the mail-person as if they were a potential friend—with their own stresses and concerns and most importantly, a sense of humor. I try hard to take everything as lightly as possible.

MO: You mention that you are going to feature a different “limited edition” item every few months. What can we expect next!?

Ashley: I always said that I would treat Survival Of The Hippest like microwave popcorn…once the pops started to slow, I’d throw in a new bag. So, while I’ve got a few super-fun ideas up my sleeve, the pops just haven’t stopped yet on the Twitter ID necklaces…so, for now at least, I’ll be sticking with this bag.