“…there was a realization that for marketing to work people need to have an epiphany.”

Ben Crawford is an entrepreneur and investor as well as a partner at Epipheo Studios, who creates online videos that are designed to educate and enlighten viewers. He is an expert at working alongside businesses to help communicate their stories and has specialized in creative communication using a variety of simple formats.  He has traveled the world with his family and enjoys hiking and climbing.

Epipheo Studios is a group of storytellers who see a new type of media emerging.  They are changing the way people think about or understand specific companies, products, or services through online videos. These videos, known as Epipheos, are designed to create an Epiphany through video = Epiph – eo.

MO:
Let’s jump right into the heart of it.  The “epipheo,” or video in which viewers have an epiphany, conveys the company message clearly, entertainingly, and intuitively.   The first question I have for you isn’t how did you come up with this new way of explaining or conveying a message.  The question is, why didn’t anyone ever come up with this before?

Ben: That’s a great question. We believe that we are in a new marketplace that is emerging as people are discovering how exactly to use online video and how it is different than traditional mediums.  For us there was a realization that for marketing to work people need to have an epiphany. That is, their minds need to switch from thinking one thing about a product or story to thinking something else. We believe that we can help people make that switch. There are many other video companies out there who  make all different kinds of sales or explanatory videos. I always like to explain to our clients that that is not what we do. Sometimes we use explanations to create an epiphany but in the end we have a different goal through which we determine our success. 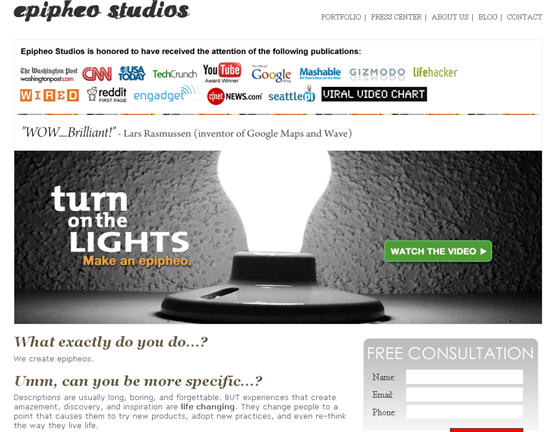 MO:
I spent a serious amount of time watching all the videos in your portfolio.  Typically, my attention span isn’t long enough to watch a single video from start to finish, but I found myself engulfed in most of these.  Is that part of the secret to what you do?  Keeping viewers engaged in the viewing of the message?

Ben: Yes. It sounds very simple but we believe that our videos have to be delightful. At the end of the day it doesn’t matter how accurate or thorough a video does if people do not watch it. And the degree to which they enjoy it is the degree to which they will share, promote and quite often believe it. For us making the video enjoyable is an art and is equally important as presenting a clear presentation of a product or service.

MO:
Epipheo Studios clients include Google, Facebook, Yelp and more.  These are among the biggest names on the Internet, known for excellent Internet technologies.  How were you able to attract these huge players?

Ben: We have a long list of clients and our portfolio speaks for itself. I think our consistent track record of being able to create that epiphany, that “AHA” moment, or that paradigm shift has got the attention of some of the big names. The thing about an epiphany is that it’s not a fad. It works for creating a social movement or releasing the latest gadget. I think when it has come time for some of the bigger companies to get their epiphany communicated we have more experience than anyone else out there and the track record on our portfolio to prove it. I think people assume that if Google and Facebook are using these guys to release their new product or yelp is using them to deal with a sticky PR situation something must be working.

MO:
The video created by Jon Collins of Epipheo Studios back in fall of 2008 that conveyed the vision of the Advent Conspiracy went viral in just a short time. Viewed almost 750,000 times by Christmas that same year.  What sort of impact did the success of this video have on your firm?

Ben: This video is one of the main videos that helped us realize how powerful the medium of video could be. It really had a huge impact on our mission and vision as a company. I mean here you have a message of spending less and giving more during Christmas. I mean, nothing new. This has been around since the beginning of time and no one cares because we’re bombarded by so many different messages during this season. But people were watching this video and in three minutes people actually started to see these issues differently. They actually started to care. There was no new information. It was just told in a way that harnessed the full power of video.

MO: What is the key that makes Epipheo Studios videos so appealing and captivating as a marketing tool?

Ben: I think that some of the most powerful tools are the simplest. People love stories. I think it’s real easy to get caught up in features but deep down people want to relate to characters and conflict. Sometimes all we do is help people to realize and tell their own story.

MO:
I can’t help but mention your fascinating and free book, entitled How I Went From Waiting Tables to Being a Professional Blackjack Player.  What would you say the most import lesson in the book is?

Ben: Hahha. That book is a bit from a previous life but learning how to run a blackjack team is where I got my business education. I’m not sure about the book but I know that the same out of the box thinking that it took running the blackjack team is what makes being a part of a start up like Epipheo, enjoyable. As an entrepreneur, I love developing and progressing and because of that I love being in a field where we can constantly be pushing the envelope working with so many cutting edge businesses and helping them try and communicate their message.