“The Google of social search, that’s where we’re going.”

Brad Noble is the founder and product designer at PostPost, a powerful social search engine that brings back content from your Twitter timeline. Brad attended University of Melbourne and Dickinson College.

People use PostPost to find stuff from their timeline they can’t find any other way, to discover things they missed, and to research brands, products, apps, people and all kinds of other things. 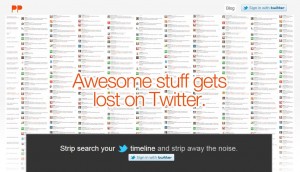 MO: At this time just about everyone has a twitter. What gave you the idea to create PostPost?

Brad: I’m very careful about who I follow. I am constantly adding and removing people, because my timeline is precious to me. On any given day, I learn more there than anywhere else. It’s important that it stays relevant to me. That it’s not noisy. But careful as I am, I still can’t keep up with it. I wanted a way to bring back stuff I knew was there, and to recall the things I missed. There wasn’t any other way to do it, so we made PostPost.

MO: Out of all the social networking sites out there, what make you decide to aim toward twitter? Why not Facebook?

Brad: The difference between Twitter and Facebook is to many a subtle one. As a result, they get lumped together a lot. To us, they’re very different. Facebook, until recently, was a network where people had to mutually agree to follow each other–to be friends. Twitter is asymmetrical, which means you can follow people who don’t follow you back. This seemingly subtle, nerdy distinction has huge implications: Facebook is a more retrospective experience, while Twitter is a more aspirational one. In other words, Facebook is about where I’ve been, while Twitter is about where I’m going. The content rushing past me on my Twitter timeline is stuff I want to recall—because it’s the stuff I want to know, shared by the friends and thought leaders and entrepreneurs and designers who are generous enough to share it.

MO: Why did you decide to go into business for yourself?

Brad: Because the time is right. The world wants a proper social search engine and the big boys aren’t getting it done.

MO: Barriers for the technology field are relatively high, what were some barriers you faced/overcame on your way to growing your business?

Brad: More than anything else we had to deal with scale—the success that comes from user adoption. We are indexing a massive amount of stuff—Tweets and the pages that they link to. We are also storing a ton of info in our database that defines a person’s relationships—ie, who each PostPost user follows on Twitter. We also have a powerful algorithm to rank those people so that when a user searches, the content returned is relevant. So, there’s a lot going on. In the early days, when we’d get a press mention or an influential person like Scoble would Tweet us up, we’d come crashing down under the weight of it. We’ve learned our way through a few of those moments so that we can handle waves like that now. I sleep better.

MO: What was your initial goal when staring PostPost? Did you ever think it would become as successful as it is now?

Brad: Our initial goal was to make something of value for one person out there. And I mean that. We were very early to the social search game. When we launched, people really didn’t have expectations for it. We knew it needed to exist, but we weren’t sure the rest of the world was ready yet. Now, it seems the timing is right. The market has caught up. The big boys have stepped in the direction of social search. People are talking about it. Now our goal is reach as many people as we possibly can.

MO: Where do you hope to see your business in the next five years?