“I left with my car fixed, but I never stopped thinking to myself that there has to be a better way.”

Brad Weisberg started BodyShopBids with the hopes of making the painful process of car repair a thing of the past. Before BSB he invented the internet while studying at Indiana University. He also co-founded TheJMom.com and led the global sales team at whereivebeen.com. When not building awesome companies Brad can be found playing ping pong, soccer or eating at his favorite restaurant Red Lobster.

BodyShopBids is a website and mobile app that connects consumers who need auto body repairs with body shops through a unique bidding system. The company’s technology allows users to easily upload photos of damaged vehicles and receive custom quotes from local body shops, all for free. 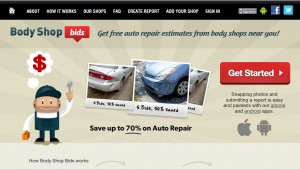 MO: Can you tell our readers how a personal experience inspired you to create BodyShopBids?

Brad: One evening back in 2005 I was walking out of a restaurant back to my car, and I found a big dent right there on the driver’s side door. I was pretty new to the area, so I wasn’t quite sure where to start going about getting it fixed. I ended up taking the car to three different body shops to see what kind of estimates I’d get, and I was surprised when they varied so much. In fact, one estimate I got was over $1,000 and another estimate was $300. I don’t think I even need to say which one I chose. I left with my car fixed, but I never stopped thinking to myself that there has to be a better way.

MO: How did your background and previous experience help you in creating the site? How long did it take from having the initial idea to getting it to market?

Brad: My friend and colleague Matt Pulley was a co-founder with me on TheJMom.com, my first entrepreneurial endeavor. When it comes to website and app development, Matt’s the man. Right now he serves as BodyShopBids’ VP of Technology.

It took about five years from the initial idea stage to get the concept to market, but only because I sat on the idea for so long. We’re in hypergrowth mode right now.

MO: How were you able to secure initial seed funding from Lightbank and how has that capital allowed you to develop BSB?

Brad: I think what it comes down to is that we had a great idea and a valid plan to put that idea to work for us. Lightbank recognized this and backed us with $250,000. They were also involved (along with OCA Ventures and New World Ventures) in our Series A funding round of $1 million that we announced earlier this year. The capital, as well as their expertise, has been invaluable in moving the company forward.

MO: How hard has it been to put together a network of reliable body shops and how keen have they been to provide quotes based on uploaded photos from potential customers?

Brad: The body shop owners we work with are great. Some of them are skeptical when we first approach them with the concept, but after we explain how it works they see it as an opportunity to use the technology to bring in new business. And in addition to the photos, customers provide the make and model of their vehicle as well as the VIN, which helps shops provide accurate, reliable estimates.

Brad: In a way, the most challenging part was making the website and the app as simple as possible for the user, but at the same time, all we did was make the process as simple as it should be. The most fun part? Definitely our mascot. I mean, come on, have you seen him? He even has a five ‘o clock shadow. You can’t beat that.

MO: What do your plans for expansion look like for 2012?

Brad: We’ve been hearing from body shops all over the country that are excited to sign up to our network. By last count, we’ve partnered with more than 500. Our plans for expansion are tied directly to demand, and right now we’re looking at California, New York and Florida. We’re continuing to grow in Chicago, and Los Angeles is our next city market.