“We’re not driven by awards — we’re driven by a passion to keep people safe and alive, if we pick up a few awards along the way for what we are doing it’s a tremendous recognition.”

Brad Zotti is the co-founder of Soteria Systems, a software company that develops high-performing, technology services designed to promote the safety and well-being of individuals and their communities.

MyForce is a personal security service that arms users against danger with the touch of a button sent from any iPhone, Android or BlackBerry smartphone, and works across all carrier networks. MyForce allows users to send a discreet alert to their professionally staffed monitoring centers nationwide, as well as subscribing campus law enforcement, when they’ve deployed the MyForce Campus System. 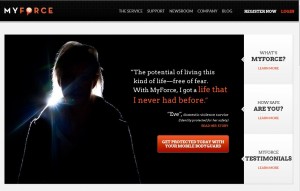 MO: What influences have contributed toward you creating a software company that that focuses on safety issues?

Brad: First and foremost, myself and Charlie Groves, our COO and Co-Founder are fathers. I think this puts us in the ranks of parents that want to ensure the safety of their children by providing them all the tools available to go out and enjoy life’s adventure while being safe. When I came up with the idea, I was literally in the pick-up line at my son’s elementary school, which happens to be a situated on a university campus. I noticed a college student on her smartphone as she passed a blue light emergency phone and thought, “What crime ever occurs within reach of the blue light phone?” From there, I was inspired to find a way to take that blue light concept and put it on the one device that everyone has with them — their smartphone. Around that same time, a friend introduced me to Charlie. By coincidence, Charlie’s 13-year old step- daughter had recently been out jogging in a nice neighborhood when a stranger grabbed her from an alley, threw her on the ground and began groping her. She was lucky enough to be able to kick and punch him enough that she broke free and ran home. In that situation and in some many similar situations there is no way some one has time to dial 911 and communicate all the necessary information to initiate a response. That night, the local news put up a shoddy sketch of the suspect, but no one was ever caught and identified. Needless to say, after Charlie and I researched the statistics of crimes against people in all walks of life, we were motivated from that point forward to find a comprehensive way to increase safety on a personal level, through each individual’s own control.

MO: What have been some of the biggest challenges when creating MyForce and how did you overcome them?

Brad: Finding good partner and resources. It’s easy to get excited about what we’re doing, and we haven’t run into anyone that wasn’t impressed. Most often, once we tell someone what we’re offering, they immediately recall a personal story or connection to a crime or unfortunate incident and can visualize the instances in which MyForce would have been useful. But it’s been a challenge to find the experienced partners and vendors that are excited about our cause and motivated enough to take the charge in helping us create a safer world. I have spent many late nights researching people, their companies, and following up on leads through business connections to find the right mix of talent, intelligence, and passion needed to make MyForce a success.

MO: The shootings at Virginia Tech are another reminder that implementing campus safety is a paramount issue within colleges and universities. How does it feel to be offering a solid solution to what has been a serious long standing issue?

Brad: As a father of children who will eventually enter college, It feels great to know that a solution exists that improves the safety and well being of individuals. As a businessman, I am extremely proud of myself, my partner and my team for what we’ve created. Colleges and universities — including hospital, corporate, and government campuses — are very excited about MyForce, as well as the MyForce Campus System. The MyForce Campus System give on-site campus law enforcement an opportunity to receive alerts within their campus jurisdiction, and view the same exact monitoring interface that our professional monitoring team sees when an alert is received. What’s best, is that a student or faculty member, is still protected when they leave campus boundaries, as our team is always the umbrella responder. We fielded dozens of phone calls this past fall from campus law enforcement departments who have been looking for ways to easily bolter their on-campus efforts in a cost-effective manner. There are some on-campus safety solutions, but none as comprehensive as ours, and none that work both on and off campus – protecting the student, faculty member, or employee wherever they go in the U.S., 24/7.

Over the 2 years it took to assemble the team, conduct market research, create the technology, and launch our offering, we spoke with dozens of officers, Chiefs of Police, and Directors of Safety at many institutions. While they explained that they all have the blue light emergency phones, and use it as a topic they showcase to parents during tours and orientation, they all admitted that they blue light phones can be ineffective and used more for pranks than actual emergencies. This certainly validated our concept, but stirred a lot of excitement amongst administration and campus security looking to increase safety, improve their image, and have a solid answer when parents begin asking, “What are you doing to keep my child safe?”

MO: It’s exciting that MyForce can determine an individuals’ exact location. Is it possible that this information could be used in court cases in the future as evidence?

Brad: Yes, our system is set up for this very feature. For every alert that comes in, we track the subscriber’s GPS location during the duration of the incident, take in continuous audio recordings of the live incident, and overlay a time and date stamp every 15 seconds. We are able to retrieve specific incident information and recreate the incident using the stored time dated GPS and audio recordings; enabling law enforcement and investigators to go back and listen to details they might have missed, and of course, be able to submit as evidence. We currently store all of this data associated to every incident for 7 years in a protected environment.

MO: Congratulations for winning a People’s Choice Stevie Award 2011 for Favorite New Product or Service of the Year. How meaningful is recognition like this for you and your team?

Brad: I think it proves a point that it’s MyForce is a much-needed service and people appreciate the need for a technology like ours. We were proud of the recognition, considering the other contenders were major players in technology and/or well-known brands. However, we’re not driven by awards — we’re driven by a passion to keep people safe and alive, if we pick up a few awards along the way for what we are doing it’s a tremendous recognition.

MO: Is there anything that you are currently working on that you’re excited to share with our readers?

Brad: We recently forged a relationship with e2Campus — the leader in mass notification systems. After the “first” VirginiaTech tragedy, it became a federal mandate that all institutions employ a mass notification system to quickly disperse information to their school community, to help maintain their safety by delivering time-sensitive and important news. The e2Campus system is deployed at over 800 college and university campuses. Together, we can now offer a robust and comprehensive solution to increase safety on campuses nationwide. Lastly, we’re working on several technologies that could potentially change the landscape of emergency response and how we locate people within structures. We are very excited about this upcoming announcement — stay tuned.