We looked at it and said, “If software technology had been around decades ago when the modern day hiring process took hold, how would we have done it?” 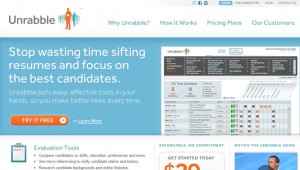 MO: What was the inspiration for Unrabble? Did you have any personal experiences or frustrations that made you feel that there was a gap in the market?

Chris: After our former company was acquired by EMC, my co-founders and I wanted to build a product that would “make life easier.” We spent a lot of time reflecting on our last venture and entire careers, thinking about what worked, what failed, what we liked and what we loathed about running a business. And the one pain point we all agreed on was hiring new employees. Hiring was very time consuming and it could get expensive really fast. You never know when an employee will move on and you’re faced with hiring a replacement but you just don’t have time to do it.

At our last company we were growing very fast and didn’t have time to read stacks resumes and do constant phone interviews. We tried using recruiters, which helped, but we also ended up spending half a million dollars on what amounted to resume screening. We never found a good solution. So, following the successful sale of that company, we were determined to solve the hiring problem. For us, sourcing candidates wasn’t the issue. Job boards and social networks do a great job of that. The problem started when resumes started flooding our inbox.

So we created Unrabble, a cloud computing solution designed to evolve the hiring process and give us better hiring decisions easier, faster and cheaper… allowing us to do it ourselves, without HR or recruiters.

MO: How much has Unrabble evolved since you founded it in 2009? What have been your greatest obstacles?

Chris: We spent close to two years in the research and development phase going through multiple product iterations before we launched Unrabble in September, 2011. We spent a considerable amount of that time doing private beta testing to get user input. The core functionality of the software is essentially the same, but we have made some major enhancements based on feedback from our customers.

The biggest challenge has been creating the right user experience. As I mentioned earlier, our goal was to create a product that would make your life easier when you have to hire a new employee. Building software to automate tasks is easy – there’s plenty of that out there already. The problem is that much of what has been done is just automation of an outdated process which doesn’t make anything easier. You’re not actually saving time, you’re just using software instead of paper – so, what’s the purpose?

We needed to create a user experience that was so simple, it eliminated the learning curve but intelligent enough that it actually created a ton of value. To do this we had to rethink hiring. We didn’t map out the hiring process and say “how can we automate this?” We looked at it and said, “If software technology had been around decades ago when the modern day hiring process took hold, how would we have done it?” A good example of this is that we concluded that the resume was a big problem. Every other hiring platform on the market starts and ends with the resume. We threw it out.

MO: How is an Unrabble profile able to show more than a traditional resume to potential employers?

Chris: Job candidates create an interactive profile that details their career history. It gives the candidate the opportunity to do things a traditional resume cannot do, such as connecting to their social media profiles, explaining job transitions, ranking their skills and bragging about their accomplishments (bragging is supported by a unique feature called Micro-references that allows candidates to have very specific accomplishments verified by their professional network). There’s so much more to people these days than what is just summarized in a resume. Our profile allows candidates to tell their story in a way a resume never could.

The interactive profiles then flow into Unrabble, where hiring managers can easily identify candidates that match what their needs. Profiles can be analyzed and researched in ways that would have typically required significant time and even phone interviews to accomplish. It automatically ranks job applicants based on an array of criteria including job skills, career preferences, and other specializations to quickly identify the most qualified candidates.

MO: Do you think that Unrabble can revolutionize the hiring process?

Chris: Absolutely. I believe the traditional resume is dying and the rich, interactive profile is the future. That shift will help revolutionize the hiring process and Unrabble is the first solution to unchain hiring from that legacy. I’m also greatly encouraged by initial customer reaction. One of our early customers told me that after using Unrabble he would “never look at paper resume again.” It was one of those moments when you know that a real-world user has connected with your vision.

Our usage and pricing model is also disruptive in the hiring space, which you need to drive change. Businesses can sign-up for a 30-day free trial, no sales, no phone calls, no credit card, no catch, just sign up. We believe that the proof is in the using the product and once you try it you won’t go back to doing it the old way.

MO: What’s been the most rewarding aspect of starting your own company?

Chris: Going from pure vision to a marketable product is hugely rewarding. As fun as it sounds it takes tremendous willpower because it’s easy to lose sight of what you originally set out to do. So it’s rewarding to see the initial inspiration create a product to make life easier stay intact. Seeing busy managers use our software, which doesn’t required implementation, training, demos or reading onerous documentation, is testament to how intuitive the software is. When we hear from customers how it’s changed the way they hire, it makes the long days and nights worth it.

MO: What is the most exciting thing on the horizon for Unrabble in 2012?

Chris: We probably got 20% of our vision into the first product release so we have a huge backlog of functionality that hasn’t surfaced. We have a few surprises that we’ll be revealing throughout the year, but as you might expect I can’t really reveal any of it now. I’m excited about wrapping up the test-marketing phase following our launch in September, and getting on with our big customer acquisition push and marketing campaign in 2012. We really like to engage customers and let them help forge the direction of the product.