“It’s a good thing that Steve martin was correct when he said, “Thankfully, persistence is a great substitute for talent.”

Surprisingly, Tulsa Oklahoma has been named by Forbes Magazine as “The best city for Young Entrepreneurs” and Clay Clark has been named “Entrepreneur of the Year” in Oklahoma twice. He began his career by starting America’s largest wedding entertainment service (DJ Connection) out of his Oral Roberts University dorm room. At age 20, he was named “Young Entrepreneur of the Year” by the Metro Chamber of Commerce. At the age of 27, he was named by the U.S. Small Business Administration as “Oklahoma’s Young Entrepreneur of the Year.” By the old age of 30 he had founded 9 successful businesses including one of the nation’s largest photography companies and a successful commercial real estate firm. Clay is best known for his ability to create scalable business models and work-flows that require minimal oversight. Today he oversees the growth of his 9 businesses while traveling across the country teaching entrepreneurs how to build replicatable business models to create the sustainable growth and revenue people need to achieve their dreams. Clay Clark currently has written 4 books, and is one of America’s most sought after business and entrepreneurship coaches with a list of former and active clients that includes: O’Reilly’s Auto Parts, Maytag University, Farmers Insurance, Hewlett Packard, Valspar Paint, Oklahoma State University etc… 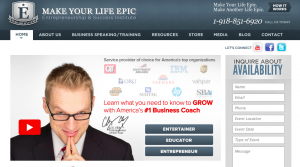 BusinessInterviews.com: You impressively launched one of the largest wedding entertainment services from your dorm room during college. What was the most powerful lesson you learned about running a business in your first year?

Clay: When I started the company I learned real quickly that the calvary was not coming. I learned that if it is meant to be, it really was up to me. When you get the “big idea” to start a business it’s fun, but when it’s “go time” and you have to throw yourself into the grind that is marketing your product it gets real. Starting a business is sort of like waking up every day in the wilderness feeling like your hair is on fire because you know that you could be eaten by a Lion, but at the same time you yourself are hunting for food to eat.

BusinessInterviews.com: Can you share some of your tips for keeping “costs down and quality up?”

Clay: It is very important that every entrepreneur first knows their 4 key numbers. You must know what your break-even point is, you must know what your profit per customer is and you must know how much comes in and how much goes out each month. Once you know these numbers you need to build a merit-based pay environment and a culture where you generously reward production and results and you enthusiastically offer extremely low pay for poor performance.

BusinessInterviews.com: You devote 15 to 30 minutes per day to reading case studies, biographies of successful entrepreneurs and self-help books. What’s the most interesting or inspiring thing that you’ve read in the last month?

Clay: In Steven K. Scott’s book, The Richest Man Who Ever Lived he writes, “A vision is a precise, clearly defined goal with a detailed plan and timetable for achieving that goal.” When I shared this definition with our team, two of our younger team members experience and epiphany. This quote helped them realize that they did not have a vision for their lives at all. In fact, they quickly realized that they only had a very vague idea that “they wanted to be successful.” Understanding the need for precise and clearly defined goals with a detailed plan and timetable forced them to develop their own plans. This epiphany was inspiring to witness to say the least.

BusinessInterviews.com: Has your definition of success changed or evolved since the launch of your first business over 10 years ago?

Clay: As I was starting out I set a goal to be a millionaire by the age of 30. When we sold the DJ business nearly all of my financial goals were reached, yet this was simultaneously one of the most difficult times in my life. At about this same time our only son Aubrey Napoleon-Hill Clark was born blind. It was through his blindness that I finally understood that a business is a vehicle and not a destination. It was at this time that I realized business is nothing more than a vehicle to get myself and other entrepreneurs from where we are to where we want to be. I now sort my priorities in the order of faith, family and finances. I used to sort this list finances, finances and then family.

BusinessInterviews.com: I read that you believe that entrepreneurs “must create a product or service that is easy to scale and duplicate.” What advice would you pass on to an entrepreneur reading this interview and realizes that despite early success the concept behind their business cannot be easily duplicated. What should their next steps be?

BusinessInterviews.com: Can you talk about the inspiration behind your upcoming site, Thrive15.com and what you hope to accomplish?

Clay: Throughout my life, I’ve had the opportunity to meet the founder of Skyy Vodka, the founder of Hobby Lobby, George Foreman, the CEO of QuikTrip, one of the initial partners in the StairMaster, Best-Selling Authors, etc…and when I do I always pick their brain in order to learn how they ultimately were able to achieve success. Each and every one of these successful men and women were quick to point out the important role and impact that a mentor had on their lives. As entrepreneurs we can learn from from mentors or mistakes, and I passionately believe that everyone should have access to a millionaire, mogul or everyday success story that can be their mentor and coach. Through Thrive15.com now makes this possible. At Thrive15.com we start by asking the question Where do you want to grow? Then we show you how to achieve these goals with15-minute web-based edutainment and practical training from millionaires, mentors and everyday entrepreneurial success stories. Thrive15.com was created to teach Thrivers how to make a life, not just a living.