“Word of mouth has been huge for us and most of the time people in media call us as opposed to us searching them out all the time.”

The days of the classic rubber  ducky are in the past because of Craig Wolfe’s creation CelebriDucks.  CelebriDucks is the original creator of the first ever celebrity rubber ducks of the greatest icons of film, music, athletics, and history. They have produced CelebriDucks for the NBA, Major League Baseball, the NHL, NASCAR,  NCAA collegiate mascots, and numerous Fortune 500 companies. Their ducks have appeared on numerous TV shows including The Tonight Show, CBS Evening Magazine, and Late Night with Conan O’Brien and were voted one of the top 100 gifts by Entertainment Weekly.  They have created over 200 different CelebriDucks while pioneering a whole new collectible.

In a market where all classic rubber duckies are made in China, CelebriDucks is determined to bring the production back to the USA.  Craig has a factory in Ohio and artists in Cincinnati have the whole process rolling! 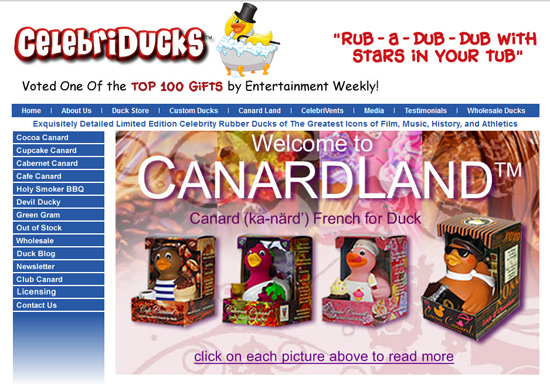 MO:
First question first, Why Rubber Ducks?  What initially drew you to this specific product?

Craig:
Bottom line, I wanted to create a business based on my passions.   I realized that everyone loves rubber ducks and I wanted to do something totally creative with the concept that had never been done before…thus CelebriDucks.  I also noticed that it’s one of the most common consumer products found in most every home in America and virtually every one of us had one as a child.  But I felt that the level of detail in the sculpting and painting that was truly possible with this artform hadn’t been done yet and I was drawn to the creative untapped possibilities.

MO:
I think it is great that you are choosing to have production of the CelebriDucks in the states.  Can you explain how you are dealing with the added costs this creates for your company?

Craig:
Yes, this is a big deal for me.  The rubber duck was invented in America and yet none are made here anymore.  We were already the only US company doing all our artwork and sculpting here, but I wanted to do all our production here.

The Syberling Estate, who began Good Year Tire, contacted us not too long ago to see about producing a rubber duck for them which would be amazing since they
were the ones who created the first ever rubber duck! They even were one of the first licensees for Disney producing the first Donald Duck rubber duckie
in the 1930’s.

After Syberling contacted us, I started the process of finding a way to bring this industry back here and funny enough bringing it back to the actual state where it all started!

Sure, the cost will be more, but we are a more expensive rubber duck to begin with so more able to absorb some of that cost and I am wiling to make less.  It’s just time to bring some of this industry back and thus we were committed to find a way to make it work. Just think, the rubber duck which was invented in America is no longer made here….literally, every one is made outside the US. So we will change that and I have to trust that we will also benefit in people wanting to purchase from an American company making US produced duckies!  I also feel that for part of the line, I can make one basic duck and use the same mold for different jobs by only varying the painting and pad printing.

MO:
How can people use CelebriDucks as a fundraising tool?

Craig:
This is a very important area for me.  Right now, you can only do duck races with perhaps one major company.  We want to be an alternative.  We want to be able to offer events that are unique and different that can gain so much more PR as you can now float celebrities such as Elvis and Pink Flamingos and Penguins in your race.  And how about a Green Regatta with our Mr. Green which is the world’s first and only 100% recycled rubber duck.  Then we have this whole other option of actually doing a duck race with ducks that are Made in America.  It’s just a great story and everyone benefits!

MO:
You have obviously made a big splash with CelebriDucks being named one of the top 100 gifts by Entertainment Weekly.  Can you explain what marketing techniques you have implemented that have made CelebriDucks so successful?

Craig:
We have been fortunate that we have one of those unique products that if you give the media one, they will tend to use it on TV, radio, and in newspapers and magazines.  It’s just quirky, fun, and unique enough to provide something different and it’s a great visual.  Every time we do our custom work for a client the client always finds that the media is very interested in showcasing it.  The PR just builds upon itself.  Plus the Hollywood community really has embraced us and seems to really enjoy our products so we end up in a lot of the Award Show gift baskets.

Word of mouth has been huge for us and most of the time people in media call us as opposed to us searching them out all the time.  That’s how we ended up on The Tonight Show, Late Night With Conan O’Brien, CBS Evening Magazine, and so many other shows including being a question on Who Wants to Be a Millionaire?  We never had even contacted any of these folks.  So we are very grateful that we have a product that people can have fun with.

MO:
I see that you can buy CelebriDucks on the website, and they are given as promotional items by a lot of big name companies, but besides there website are there other avenues for the average consumer to buy CelebriDucks?

Craig:
Actually, if you look at the contact section on the website you can see we have distributors around the world who sell thousands and thousands of them.  We sell our Blues Brothers at the House of Blues around the country, our Pink Flamingos at The Flamingo in Vegas and in hundreds of gift stores around the country.  We work through gift and pool and spa distributors so they get them out there.  But it’s hard to find a store that carries the whole line…thus CelebriDucks.com where you can find them all!

MO:
Which CelebriDuck has been your favorite?

Craig:
Wow, this is a tough one as I like different ones for different reasons.  I think our KISS ducks are just amazing.  The sets sold out, but we will always keep Gene in the line as long as he is willing.  He has been wonderful in his kind support of our company.  I always thought Popeye was one of the best things we ever did.  I just felt the sculpting and look of him was just amazing and his gift box is just gorgeous.  Now we do all our ducks in their gorgeous gift boxes which adds a whole other level to their collectability.  I love the Wizard of Oz ducks and Mr. T remains our top selling duck worldwide.  I guess I am also especially proud of our new Canard (French for duck) food themed ducks representing Cupcakes, Wine, Chocolate, Coffee, and now BBQ (well he’s a pig!)   And I do think our Devil Ducky that is just about to arrive here is probably the cutest looking devil duck ever made.