“…if I did any dirty material and my parents found out, they would kill me, since they are conservative Asian parents (from India and Japan).”

Dan Nainan prides himself on providing clean comedy to clients all over the United States. He has performed at a TED conference, The Democratic National Convention, Three Presidential Inaugural events and the Jerry Lewis Telethon.

Dan has traveled to Aruba, Trinidad, South Africa, Mexico, Hong Kong, Singapore, Malaysia, Japan, the Netherlands, England, Scotland and Canada to spread his humor. In late November, Dan is hitting three continents in four days – Dubai, Dar es Salaam and Honolulu. Previous to his life as a comedian, he traveled the world as a senior Intel engineer, demonstrating the latest technology on stage with the chairman of the board and cofounder Andy Grove. 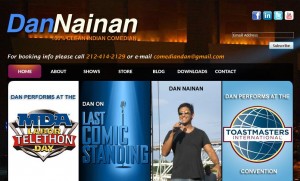 MO: Tell us about your background and why you were drawn to comedy?

Dan: I always seem to have a penchant for making people laugh growing up. I wasn’t exactly the class clown – actually, I was painfully shy and withdrawn in school. But once in a while, I would blurt out something in class that would cause everybody to burst out laughing – sometimes I would even be kicked out of class for doing so.

In my job demonstrating the latest technology on stage with Intel chairman and cofounder Andy Grove, I traveled the world, speaking on stage to audiences of thousands. The technical part was easy, but the terrifying part was the public speaking. To help deal with the fear, and to satisfy the curiosity about becoming a comedian, I took a comedy class, and it changed my life. Not only did I get over my fear of speaking, it led me to where I am now.

MO: There are so many struggling comedians, can you offer any advice on making it to the next level like you have?

The best advice I can offer any comedian, which is advice that almost none of them take, is to do only clean material. I met Jerry Seinfeld very early in my career at a club, and he told me that if I did clean material, I could work anyplace, and he was correct. It’s unfortunate that so few comedians work clean, because they could be much, much more successful if they did.

I would also strongly recommend that they learn to get up early and stay off the substances. So many comedians party all night, drinking and doing drugs, and get up in the afternoon – this is highly self-destructive behavior. All of the auditions for commercials and television and movies take place during the business day. These comedians who sleep all day are missing out on absolutely incredible opportunities, such as the Apple commercial I was in, for example.

And of course, being technically savvy is so incredibly important these days. I would strongly recommend becoming as computer literate as possible by educating oneself or taking classes.

MO: I like that you specifically state that you provide clean comedy. Why is this important to you?

Dan: First of all, if I did any dirty material and my parents found out, they would kill me, since they are conservative Asian parents (from India and Japan).

Second, doing dirty material just doesn’t fit my persona. I do think of the occasional dirty joke of course, but I have to either file it away or give it to one of my comedian friends who do dirty jokes.

Third, doing clean material enables me to do corporate events, charity galas, senior citizens homes, cancer wards, cruise ships, casinos, colleges, private parties and many other events that would not want to have off-color comedy.

MO: Good luck on your world travels! What is the biggest challenge of doing comedy abroad?

Dan: To be quite honest with you, doing comedy abroad is not that challenging – in fact, it’s an incredible joy! I guess the only real challenge is dealing with the jetlag, but that’s not too difficult as I never have to work more than one hour a day. If the worst comes to worst, I can set my alarm, wake up, do the show and go back to bed.

Working overseas is the most incredible joy that one can imagine. I fly business class to my overseas shows, and it’s absolutely magnificent to stretch out on a bed and be waited on hand and foot. I love exploring new countries, and since I only work about an hour a day maximum, and I always fly in a few days early, there’s plenty of time for touring around and even checking out other countries. For example, when I did shows in Singapore earlier this year, I had some time to check out some beaches in Indonesia – it was absolutely fantastic! So I guess you could say I’m essentially a paid tourist.

MO: How have you utilized YouTube to grow your brand?

Dan: YouTube has been absolutely invaluable to growing my brand. Before YouTube and the Internet, I would’ve had to get noticed in the New York clubs, which is extremely difficult to do. Then, I would’ve had to have a manager or agent (many of whom who are bitter, jaded failed comedians) like me enough to put me on Comedy Central or HBO, which is again nearly impossible.

Now, because of YouTube, I (or anyone) can film something and post it within a few minutes, and instantaneously, it’s accessible by a potential audience of over a billion people all over the world. The Internet has truly put power in the hands of the people instead of the traditional gatekeepers – this is a fantastic phenomenon of disintermediation – the elimination of the middleman. Instead of a few warped and twisted managers and agents deciding what is funny, the public itself decides.

I can’t tell you how many people ask me why so many comedians on Comedy Central are so awful. The reason is that Comedy Central’s programmers have a completely different view of what is funny than the public does. With YouTube, the public decides, and thank God.

My YouTube video, which has now exceeded 1.1 million views, has been responsible for getting me hundreds of bookings, as well as all of my international bookings that I’ve mentioned. YouTube has literally changed my life.

MO: How important is your website to the progression of your comedy career?

Dan: You have no idea how important the website is, and you’d be surprised how many comedians actually do not have a website !

I updated my website about a week ago, and I’m quite proud of it. Before, it was absolutely horrible – it looked like something that an engineer designed who knows nothing about graphic design, which was exactly the case. I would actually get strangers e-mailing me and telling me how horrible my website was. Now, my website has been completely revamped and I’m getting all kinds of fantastic feedback about it.

I think it’s extremely important to hire a professional web designer. As an entertainer, I just don’t have time to learn how to do web design. My web designer is so amazingly fantastic, and I would highly recommend him to anybody.

The thing is, I’ve already been getting a tremendous number of gigs for years with an awful website – I’m interested to see what will happen now that I actually have a nice one! You can see it at www.comediandan.com