Danny Vinik is the President and Founder of BrinkMedia. Danny is a writer, film director, film producer, nightclub promoter, film distributor and web developer. Danny has directed feature documentaries such as TV Party (about the punk rock cable access TV Show in the eighties) and produced such films as Spun (starring Mickey Rourke and Jason Schartzman) and The Last New Yorker (starring Dominic Chianese).

BrinkMedia is a digital media company that designs and develops enterprise class web sites (e-commerce) as well as mobile apps for the iPhone, Android, and Blackberry, and is moving into content for Tablet computing as well. Brink employs a full-time staff of web and mobile interface designers, graphic artists, video editors, as well as a very experienced group of LAMP programmers. Brink creates web solutions and marketing campaigns for a wide variety of clients including Kevin Spacey’s online filmmakers’ community, TriggerStreet.com, as well as model Christy Turlington, PayPal, and the country of Holland.

MO:
Brink is really much more than a media company or web design firm.  It’s really a well rounded marketing firm offering advertising, branding and more.  Can you tell me a bit about these services and others you provide?

Danny:
BrinkMedia is an award-winning boutique agency offering a full spectrum of digital solutions including mobile applications, Enterprise Class websites, ad campaigns, and HD video production. We’ve built iPhone, Android and Blackberry applications for clients like the countries of Holland and Monaco, and are currently developing our own BrinkGuide series, with mobile city guides for New York, San Francisco, Sicily, Brighton and Edinburgh currently available for download at the iTunes App Store.

Creativity is what we’re selling, something I’ve stressed since day one. I’ve staffed the company with an innovative group of designers, programmers and marketing consultants hailing from all over the world, and our client list reflects this global reach. 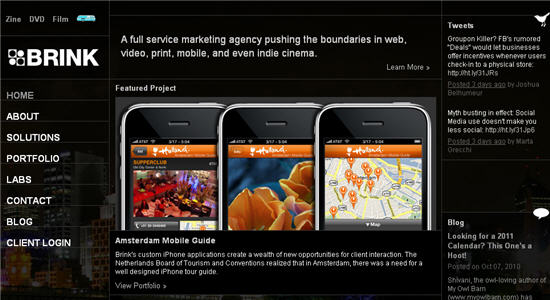 MO:
TriggerStreet.com is an interesting project you worked on for Kevin Spacey. How did you work with Kevin to help achieve the vision he had for the site?

We worked very directly with Kevin’s in-house TriggerStreet Productions producer, Dana Brunetti. Kevin’s vision was basically to send the elevator back down and give the guys at the bottom a chance to come up and Dana was quite on point in giving that vision a chance to exist. We would throw ideas at Dana, let him know what was possible and how to accomplish it and he would go back to Kevin and get the go-ahead. Very early on Dana actually hired us to put together a white paper that described the scope of work and exactly what we were doing. That was a really smart thing to do.

MO:
I came across BrinkZine, which I’ll describe as a multimedia magazine and BrinkGuide, a mobile device app which focuses on the more interesting places to visit on your travels.  What has working on these internal projects done for you to further the company?

Danny: BrinkZine is basically an experiment in communal content, a way to blog without having to commit to an entire blog. It’s basically an incubator for us – a chance to try out some code or a new approach, when we are waiting for the client to make up their minds on something.

BrinkGuide, on the other hand, is a much more commercial endeavor. We sell city guides, branded for the kind of tech savvy travelers that we can relate to, for mobile devices. We have 5 out now on the iPhone platform, and soon they will be available on the Android and Blackberry platforms as well. We hope to have at least 12 different cities out by the end of the year with many more to follow. 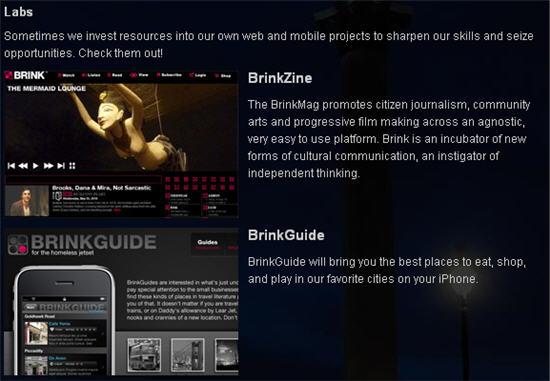 MO:
Brink existed during and survived the fragile Internet bubble.  What were some of the strategies you employed to navigate the rough waters of that period and come out on top?

Danny:
Well, we are at heart a service business, with a little content creation on the side. That’s the formula that has kept us in business.

MO:
Considering all the different industries you’re involved with as an entrepreneur, which is your favorite?  Which do you find most rewarding and why?

Danny:
I’ve spent the last year directing a documentary about the Mexican Day of the Dead. It’s part concert film featuring the band Calexico and part social commentary – the film talks about borders, and death, and the way different cultures deal with death. It’s called Flor De Muertos – look for it soon on all the best channels…  Making films and producing filmed content is where my heart is. The rest of it, I’m just very good at… because once you can produce a film, you can produce just about anything – from websites to rabbits from boxes….