“Few families do enough to preserve their history. If we can encourage more families to spend a few minutes recording their stories, we’ll be leaving behind an important legacy.”

David Adelman founded his company, Reel Tributes, after his grandmother passed away and his mother made an incredible film for the family. Seeing the reaction of his family members in the room– at that moment he knew there was something unique about these films. David decided to resist the temptation of returning to finance after his MBA and followed his inspiration and passion instead. And he’s loving it so far. 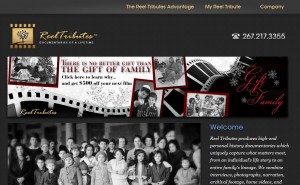 MO: Who do your main clients tend to be?

David: Our client base is diverse, but has one common thread: people seeking to preserve stories and memories. Clients range from individuals celebrating their parents’ 90th birthday to organizations celebrating major accomplishments and thanking donors. Film is by far the most powerful medium for telling stories.

MO: Do you ever get people who feel are uncomfortable, thinking that they don’t any special stories to tell or is everyone usually quite happy to share their life and experiences with you?

David: That’s certainly a concern. Many people don’t want to share their stories. This can be because they’re private, shy, or feel like they don’t have any unique life experiences. In almost every case, this turns out to be false. One client went from feeling shy and guarded to asking us to return for another interview… all within 2 hours. Everyone has a powerful story to share and a life worth preserving. Sometimes it just takes some convincing—usually from their children—before they recognize this.

MO: How has Reel Tributes evolved since you started just over a year ago?

David: We’ve come a long way since we started. We’ve created some powerful partnerships, including with the Alzheimer’s Association and a luxury hotel chain. Our name is starting to make its way into the market as a premier film producer. This is a word-of-mouth business, so that’s a critical part of our marketing plan.

MO: Can you reveal the kind of cost involved with creating a high-end personal documentary? Is this a product that’s easily attainable for most people or will it take a bit of saving up?

David: Our goal is to provide the highest-quality product for families. Therefore, each film requires careful attention and customization. Given the amount of labor involved and the quality of the film, our price points are quite reasonable. They start at $5,000, which is less than most wedding films. And the film is typically split among multiple family members, which makes it even more affordable. It’s certainly an investment, but one that will only appreciate over time.

MO: How does it feel to be redefining the lineage of oral histories?

David: It’s a big task, but we’re up for it! Few families do enough to preserve their history. People talk about doing more, but life always gets in the way. The amazing thing is it’s really not as much effort as most people think! If we can encourage more families to spend a few minutes recording their stories, we’ll be leaving behind an important legacy. We have a lot to learn from our past. There’s no excuse for knowing more about the Kennedys or Kardashians about your own grandparents.

MO: You’re currently working on some innovative partnerships, including one with the Alzheimer’s Association. Your goal is for every person diagnosed with early-onset Alzheimer’s to record their life story. What are the biggest challenges you’ll face during this project? Would you like to reach more people with terminal illness to pass on their histories to future generations?

David: We are excited about the Alzheimer’s Association partnership and the prospects for spreading the values of storytelling. A few weeks ago, my business partner and I volunteered at the Philadelphia Walk to End Alzheimer’s. We met dozens of individuals who said “I should have done more while my father was still alive. Now it’s too late.” That shouldn’t happen. People should recognize that we’re all mortal. The challenge is taking action while the parent or grandparent is still alive and healthy. It’s never too early to start. Most people wait until their parent is sick, and that makes our job much more difficult. This applies to anyone, whether they have a terminal illness or not. As one Alzheimer’s patient told us, “I want my grandchildren to know me as a healthy and productive woman, not a sick patient, so it’s important to tell my story today.” To learn more about our Alzheimer’s Association partnership—and a contest to encourage Alzheimer’s families to record their stories— visit www.reeltributes.com/memory.