“I’m a very expansive person; I believe that in the online world if you don’t grab your stake in a niche very quickly then somebody with more initiative will.”

David Merry spent the first part of his professional career in the building strategy team at the London based search marketing company Greenlight Search. He co-founded CastleCasino.com when he was 21 and now, at age 22, he heads the online marketing team there, focusing the majority of his time on SEO and their affiliate program.

Castle Entertainment has capitalized on the introduction of live streaming technology and allows casino enthusiasts to play games streamed directly from a casino or studio with real life dealers. This is all done through the customer facing website CastleCasino.com, which also contains 50 other casino games. 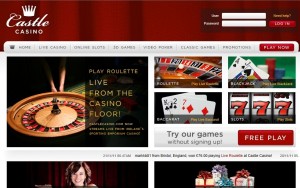 MO: What was your inspiration for using a live gaming model and what platform have you used to provide this experience?

David: I wish that I could say that it was one of those eureka moments; however the live gaming model was pretty much forced onto me by chance. I was winding down at Greenlight Search one Friday afternoon and an old employee who had left to become an affiliate manager at a TV casino came back to collect a few things. We went out for a quick drink after work and we were talking about his new role and what it entailed, he showed me several sites on his phone that he managed over there and also told me that they earned a lot of money, I even seem to remember him saying the words “live casinos are the way forward”.

Since I began working online I have been spending every free moment outside my full time job trying to get a get a break, so sensing this could be it I jumped on it. I went home and began researching the industry straight away, seeing who was already there and looking for gaps to exploit as a newcomer. Within a week or so I’d spent my whole months’ salary on a great domain and began building an affiliate site on it advertising live gaming, I made money pretty quickly and brought more domains in the industry and developed more sites. Within 4 months of that coincidental meeting the money I was earning through live gaming affiliate sites was dwarfing my salary so I left my job.

I’m a very expansive person; I believe that in the online world if you don’t grab your stake in a niche very quickly then somebody with more initiative will. Before my notice had even been served on my day job I had created a business plan for CastleCasino.com and began pitching it to several investors I luckily managed to get hold of through friends, they loved it and we began straight away.

I tested out different platforms to bring the whole plan to life, there was a lot of rising stars in the mix, however one called Visionary iGaming particularly stood out to me. The sites they were running where always a cut above the rest, they had a good set of games available and the people behind the scenes where as their name suggests visionaries.

Obviously I’ve missed out the blood sweat and tears in the process, but the scene was set and after 7 months of planning and hard work CastleCasino.com finally launched.

MO: How much experience in the gambling industry before you started developing CastleCasino.com?

David: In terms of professional experience I had none whatsoever; I’m not a big gambler myself so that didn’t help either. The only actual experience I had before CastleCasino.com began was starting the affiliate sites along the way, although that helped me learn about one of the key marketing angles which still proves useful today.

The majority of the experience which I gained regarding the casino workings was all through books and online reading, I also got a number of help sessions from ViG, who run the CastleCasino.com software, which proved invaluable.

I’ve never been one for square learning, if you’d sent me to casino school for a year beforehand I probably would have dropped out, I learn much better and quicker on the job. Sometimes this has its pitfalls, but it works for me.

MO: What kind of feedback have you been getting so far regarding people getting to interact with a live dealer? Do you think that the live streaming innovation has set the bar in what people will expect in their online gambling experiences?

David: Put simply, people absolutely love it. Before live dealers where introduced all that the player could rely on would be the computer generated graphics and numbers which a lot of people didn’t trust as it could be manipulated fairly easily. The live casino phenomenon allows players to literally say hello to a dealer as they join the table, as they would in a real casino. As we like to say, it as close to the buzz of being in an actual casino you’ll ever get without actually being there.

I certainly think that the bar has been set with live streaming; there will always be a small group of people who will always prefer computer generated games as this is what they are used too, but live gaming is the future. I would go as far to say that in the distant future every casino will feature live casino dealers.

MO: There are a lot of casino sites out there, what’s your marketing strategy been so far? And how has it been working? Have you had to tweak anything along the way?

David: Marketing has been harder than setting up the actual live casino, it is amazing the money that some of the other casino sites have for marketing, which makes it very hard on my shoestring budget.

In order to try and overcome this I’ve focused my strategy on smaller but long term revenue generating advertising methods, in a way trying to make sure that we have a consistent bread and butter source of income before fluttering money away on methods which need consistent financial upkeep. This strategy has primarily involved SEO, which I was fortunate enough to have a good background in, as well as affiliate marketing, which I’ve learned along the way.

As well as getting the brand out their we’ve tied in a number big player promotions, like when we lent a player an insured leased Lamborghini Gallardo for a week as a prize. And also some eye catching promotions like when we got 8 models to visit London in CastleCasino.com branded clothes and give our free £50 play cards – we had a great response to that!

I think the key to beating the other sites with us has simply been to be inventive, making sure that whilst another casino can spend £100,000 on a promotion, we can provide an experience just as great for a fraction of that price.

MO: CastleCasino.com is already one of the top online gaming sites in the world after launching in July of 2010. After finding success in a huge market so quickly, what are you planning next?

David: That’s an interesting question, I’ve always been the type of person who never sits still and has to move to other projects, but for now I think I’m content. For the foreseeable future like to cement a larger share in the online casino operator field whilst expanding on a number of affiliate portals through my other company RightCasinoMedia.com.

I’m aware that playing to your strengths is important but I’d eventually I’d love to move offline invest in international property. I’d also like to become an angel investor of some sorts, putting cash into young people like myself to help them fulfill their ambitions, I don’t think there is enough breaks out there for the young generation, which is why I am always so grateful I got mine.