“Some contracts suddenly sought “rights throughout the universe,” as if there are magazines on Mars. I wanted Featurewell’s existence to convince writers to fight for their rights.”

David Wallis, founded Featurewell.com in 2000. A critically acclaimed journalist, Mr. Wallis specializes in interviewing business and political leaders, such as Vaclav Havel, Jimmy Carter and Newt Gingrich. Wallis, who contributes to The New York Times Magazine, Slate.com, The Washington Post and the Times of London, is the editor of “Killed: Great Journalism Too Hot To Print” (Nation Books, 2004) and “Killed Cartoons: Casualties from the War on Free Expression” (W.W. Norton, 2007).

Featurewell.com is an electronic marketplace for the global publishing industry. The website provides editors with the opportunity to easily license and republish top quality journalism. Featurewell.com markets the work of more than 1000 top journalists, as well as articles from several respected publications, such as The New York Observer, The Hill, QuickandDirtyTips.com, and TV Guide magazine.

The site also features a searchable archive of more than 15,000 articles. 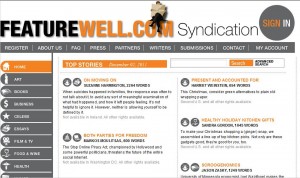 MO: What initially attracted you to writing? Who were your early inspirations?

David: I’ve been a newspaper reader all my life, and I still can’t believe that I get paid to learn. I admire many writers, but I remain in awe of Joe Mitchell, who wrote for The New Yorker in its glory days.

MO: Was there turning point which influenced you to start your own business?

David: I interviewed Manuel Antonio Noriega in prison for London’s Observer, which was a big “get.” In the negotiation with the newspaper, I retained the right to syndicate my work. More than 20 publications around the world reprinted that piece, and I earned a tidy sum. That experience opened my eyes to the financial benefits of syndication. At the same time, as the Internet exploded, traditional publishers started grabbing rights from freelance contributors. The naked greed of major publishers pissed me off. Some contracts sought “rights throughout the universe,” as if there are magazines on Mars. I wanted Featurewell’s existence to convince writers to fight for their rights.

MO: Looking at things about you online, the phrase which came to mind was “crusading journalist.” Would you accept that label? If so, what started you crusading?

David: Historically speaking, the Crusaders brutally murdered their opponents. I haven’t gone that far. I am a fanatic about promoting quality journalism and giving independent writers a fair shake.

MO: Journalism is going through a very uncertain time — no one seems quite to know how journalists will be able, going forward, to earn a living. How does Featurewell relate to that concern?

David: Indeed, these are challenging times for many experienced journalists. Pay rates have gone down for most independent journalists.

Some publications apparently adopted the something-for-nothing mentality of many news consumers. There’s increased competition from amateurs willing to work for free. Consider the market for photojournalism. Many publications now shop for cheap photos on Flirkr to avoid hiring professional photographers. Also, article sweatshops like Demand Media, which pay a pittance for original journalism, depress the prices freelancers can charge.

Featurewell.com pays our writers 60% of most sales, and we don’t give stories away to clients. We charge fair, reasonable rates, and we collect 99.9% of what we sell.

Now I don’t want to sound gloomy. The Internet has turned many writers into successful entrepreneurs. I know a reviewer of camping gear who now has a thriving niche online magazine. He sells ads for good money to gear manufacturers. Also, many companies, such as Smashwords and BookBrewer, enable journalists to self-publish e-books for modest fees. If you have a following, you are no longer beholden to traditional publishers.

MO: Much of your own journalism shows a distinct political interest. How does that interest show itself in Featurewell?

David: We frequently update our domestic and international Politics sections. Most of the demand for political stories is from progressive publications. I’m a proud lefty, but I am also proud to represent smart, talented conservatives, such as Cathy Young, Micah Halpern, and Ronald Bailey. I don’t have to agree with a writer to market their work.

MO: It’s always interesting – and perhaps a bit intimidating – to interview someone who’s conducted quite a few famous interviews himself. Any tips?

David: Bring two audio recorders in case one fails (which happened to me when I interviewed Chris Patten, the last British Governor of Hong Kong. He was very gracious, and let me conduct a second interview). Have a written list of questions, but don’t stick to it. Enter psychotherapy. It teaches you to ask and answer questions — and you’ll need professional help to remain sane in this business.